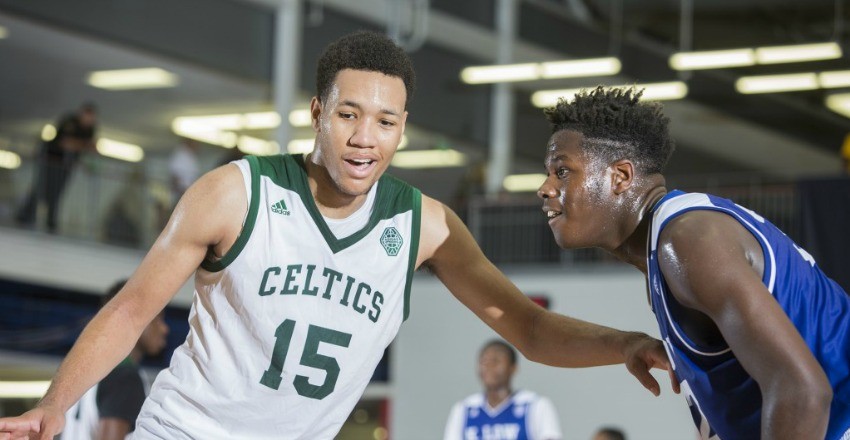 Now that the early signing period is behind us and the majority of the 2017 class has made it official for where they might be playing their college basketball next year, we look ahead to the current junior crop of prospects. While we have already spoken on the fact that the 2018 class is not as strong or as deep compared to past and future classes, it isn’t to say that there is still talent to be mined and already, a few programs have hit the jackpot in reeling in some of the better recruits that the junior ranks have to show for themselves.

Heading into the winter months and with more and more programs now focusing on the younger classes, we give a glimpse at ten programs that sit nicely and have a good chance of finishing within the top-25 of the 2018 HoopSeen Top-25 Class Rankings.

Sitting with the best class nationally, Arkansas has done what UCLA did with its 2017 class; it picked apart its state and landed the best that the area has to show for itself. Already sitting with four commitments, two coming from members of the top-50 of our 2018 class rankings, Reggie Perry and Ethan Henderson headline the class. The 15-feet and in duo should create a dynamic 1-2 punch in Fayetteville, a place where the Arkansas Hawks travel teammates will also be joined by its guard tandem on its 16-under squad with the likes of Desi Sills and Isaiah Joe. While they may sit still for a bit longer, Rodgerick Brown could be the cherry on top to the class, a 6-foot-6, bruising and productive small forward, out of Memphis.

Bruce Pearl has never had issues luring talent to his current place of employment. His 2017 class was a high mark year for the Auburn basketball program and after plotting down three top-50 talents from the senior crop of prospects, the Tigers have hit the ground running again in 2018. EJ Montgomery, a 6-foot-9 forward whose sisters currently stars for the women’s basketball program at AU, is an excellent start for the SEC bunch. The lefty is excellent out of the high post setting and should be a fabulous compliment in the frontcourt alongside five-star senior center Austin Wiley. Things won’t end with just Montgomery as the south continues to be chock full of primetime recruit so look for the likes of Diante Wood, Tony Johnson, Javin Fleming and Trey Doomes to be high on the radar of Pearl’s program for the foreseeable future.

Thanks to the Mormon mission option, BYU has already struck twice within the 2018 class. What adds even more value to both Gavin Baxter and Connor Harding is the fact that both will be two years older than some of its peers within its class which should bring more mature ball play and physicality to the hardwood. Harding is a tough-nosed producer that can score the ball at the basket off of the attack but is more than willing to defend various spots and also rebound the ball within traffic. Gavin Baxter may be the guy that really jumps out once he gets onto the floor at the Marriott Center. The 6-foot-8 forward is the ideal small ball 4-man and with the up-tempo, high possession affairs that Dave Rose has become known for with his teams in Provo, the Utah native could excel early on and become a go-to piece for the Cougars for years to come.

Seeing that the NCAA rulings are now behind Rick Pitino and his Louisville basketball program, the Cards have hit it off on the recruiting trail and have not seen much recourse for some of the transpirings that occurred a few years back. Where 2017 will bring a top-10 class to campus, the Cardinals seem pretty optimistic for future classes as they already picked up the commitment from top-50 guard Anfernee Simons. The 6-foot-2 junior is a pure bucket getter from off the bounce and is capable of being used at either spot in the backcourt. Look for the Pitino’s staff to stay hot on the trail as they remain in good standing for top-50 guards Luguentz Dort and Elijah Weaver, and have begun to heat things up for five-star forward Simi Shittu as the Canadian attends the same prep school as senior signee Jordan Nwora. 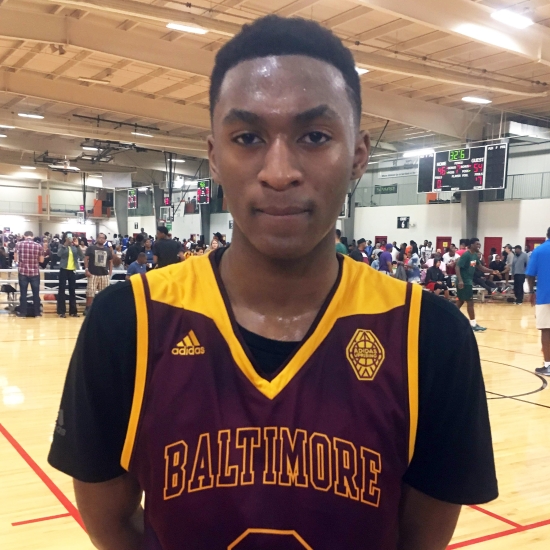 Sure, they haven’t been able to celebrate a class of 2018 commitment but the Terps are heavily in the mix for a number of top tier recruits from the area where it is likely that Mark Turgeon’s squad can land at least two of the best that call the DMV their home. Immanuel Quickley would be a giant start to things as the 6-foot-4 lead guard is a member of the USA Basketball family and has been to campus already a few times. Three attainable prospects that the Big 10 gang sits nicely with is Prentiss Hubb, Brandon Slater, and Jalen Smith where each sit within our the top-50 of their class’ rankings. All have seen their stock soar in recent months and while they already are productive, their best basketball is still ahead of them. Two others for Terp fans to keep an eye on include five-star power forward Silvio De Sousa and top-75 wing Kiyon Boyd. They haven’t struck yet but it says here that Maryland will have one of the best classes nationally in 2018.

The Big 10 has hit the trail hard early on in 2018 and Michigan State is a major reason why. First, Thomas Kithier, a mix and match power forward with a decent shot out to the 3-point line but a blue-collar approach within the interior, called MSU his future home. He is joined by Foster Loyer, a 5-foot-10 lead guard that, though he won’t pass the looks test, the floor general’s IQ, passing and uber levels of toughness tend to win out at the end of the day. While it will be difficult to find either prospect within most top-75 of its class’s rankings, both fit the mold of the Tom Izzo type of recruit. Expect for the Spartans to remain on the hunt as Brandon Johns, a top-100 forward from East Lansing, and Trevion Williams, a productive big man from Detroit, sit in good standing with the Michigan State basketball program.

It has been a transition period for the program in Columbus as a number of transfers have left the it while the Buckeyes have attempted to rejuvenate things with local recruits. The 2018 class strikes a chord with the Big 10 gang as they landed three in-state commitments from top-100 recruits. Darius Bazley is the gem to it all as the 6-foot-8 forward has some Paul George qualities to him where he can playmake and defend various spots on the floor. The top-50 recruit is joined by two prolific scorers of the basketball coming in the form of Justin Ahrens and Dane Goodwin; where shooting has become such a valuable commodity, the Buckeyes already have secured two of the best that the class has to show for itself. While already sitting nicely with three quality commitments in hand, expect for Thad Matta’s crew to do its best to keep Jerome Hunter, a top-75 forward from the Columbus area, and top-100 lead guard Dwayne Cohill, close to home in rounding out is already promising crop of junior recruits.

While the second year of the Chris Mullin era hasn’t gone as planned, the rebuilding phase of the Red Storm program has seen quality talent infused into the program. It may take a bit longer to get to where they want to be, yet the 2017 class boasts a top-75 big man in Zach Brown and the 2018 class might be able to bring even more talent to the Jamaica campus. Already holding a commitment from Boubacar Diakite, a 6-foot-8 forward that has a great motor in the interior but has developed his ball skills in recent months, it is more about the locale that St. John’s finds itself in and the prospects nearby. The second year staff has created great relationships with some of the top travel and high school programs within reach as they remain heavily in the mix for top-100 talent including Naz Reid, Luther Muhammad, Lou King, Sid Wilson, Moses Brown, and Mamadou Doucoure, where it is likely that the Red Storm land at least two of those mentioned, giving the Johnnies a great chance at a great class come 2018.

Sitting with the second best class nationally in 2018 behind only Arkansas, UNC has a lot to look forward to thanks to the early commitments of in-state recruits Rechon Black and Coby White. Nicknamed Leaky, Black is a 6-foot-7 wing that is actually best used on the ball where he will gain his fair share of Shaun Livingston comparisons in the coming years. Joined by Coby White, another top-50 recruit from the Tar Heel State, the duo should be a fierce backcourt tandem for years to come. Roy Williams’ program is far from done in 2018 as they are hounding Jairus Hamilton, another in-state recruit and top-25 recruit, along with Zion Williamson, quite possibly the most productive junior in all of the land. Picking up either of the two would more than likely cement the Tar Heels’ case for a top-10 class with signing day still nearly a year away.

We can talk all that we want about the success, or lack thereof, with the Washington men’s basketball program on the hardwood but what we cannot discredit is the work that Lorenzo Romar and his staff have done out on the recruiting trail. The 2017 class may be the best group of talent, from top to bottom, that Romar has accumulated as the head coach in Seattle and 2018 already has brought further optimism. The younger brother of five-star senior small forward Michael Porter, Jontay is in the fix as the 6-foot-8 power forward is a tough lefty with a unique skillset. He is excellent playing out of the high post setting and is one of the best passing big men that the high school ranks have to show for themselves. Always one to mine the area, UW sits in a good spot as Kevin Porter, J’Raan Brooks, and Kamaka Hepa are all within the recruiting locale for the Huskies where it wouldn’t be surprising to see any of the three call Washington their future home. Also, keep tabs on Immanuel Quickley as the Pac 12 bunch has picked up major ground in pursuit of the five-star guard, hoping to land another elite talent out of the DMV just as they did last year with current freshman sensation Markelle Fultz.