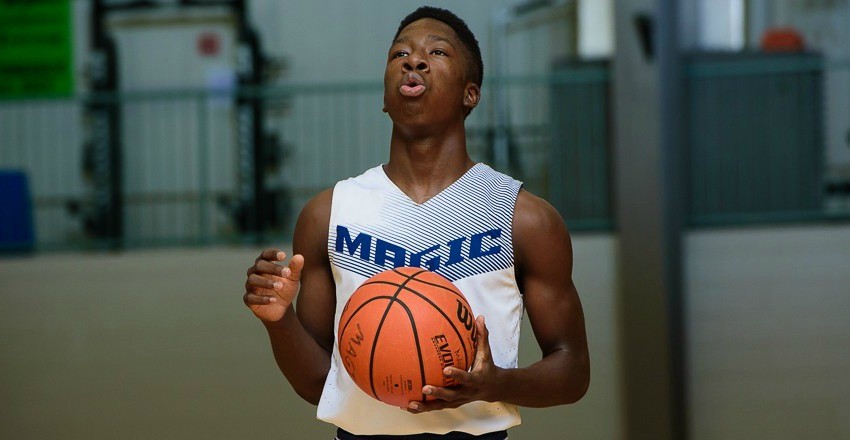 While we recently recapped the winners from the early signing period, we also wanted to give our dues to a few of the non-power conference winners. For the most of the year, most of the public’s eyes are given to the name brand programs, but come March, it’s fair game where, like last year, programs like MTSU, Yale and Little Rock become darlings of the NCAA Tournament. Looking ahead, who might become the next in line to cause some damage to your bracket thanks to an excellent class in tow within the 2017 crop?

They hold just one commitment but when LJ Figueroa made it official by giving New Mexico State his verbal earlier in the week, it made it one of the top coups of the 2017 recruiting cycle. A top-70 recruit that was one of the top scorers on the UAA circuit this past summer, a lot of schools decided to lay off the talented small forward for one reason or another. To NMSU’s credit, the staff in Las Cruces will more than take the services of Figueroa where he should become the face of the program fairly early on during his time within the WAC program. A prolific scorer of the ball that has revamped his body and game in recent months, the West Oaks product is more than ready to show all of those that passed on him what they might be missing; keep a lookout for the Aggies come March.

Pat Skerry has done great work during his tenure at the helm at Towson. The Tigers have become excellent sleeper candidates and threats in any given year to make a run through the CAA and into the NCAA Tournament. This fall, all that the staff at Towson did was go out and solidify its backcourt with three excellent pieces. Quinton Drayton is a well-rounded off-guard from the area but Jeff Prophete may be the potential all-conference guy from the bunch. A prolific scorer of the ball that will become a go-to guy from the get-go, look for the Sunshine State native to be a reason why many programs fear Skerry’s crew in the future. Closing things out, Travis Ingram flipped his commitment in one quick move, giving Towson an elite defender and potentially, the top scorer and top defender heading to the league next year.

It has taken some time but Kyler Keller finally got the head coaching gig that he had been working towards for a while now. The former Texas A&M assistant walked into a fabulous situation at SFA and while they did graduate an all-time program great in Thomas Walkup, the Lumberjacks do still have the chance to cut down the Southland nets this year at the conference’s postseason tournament. Beyond that, Keller and his staff landed a coup with Cameron Mack. Arguably one of the top passers in all of high school basketball, the in-state recruit is just a tremendous addition and someone that will be leaned upon immediately. The defending champs out of the Southland finished the week off strong by picking up the signature of Stefon Fisher, a rapidly improving and a more svelte big man with great touch and production from 15-feet and in, enabling for much optimism for the first year staff in Nacogdoches.

While they might not be sitting at the pole position within the Sun Belt’s class rankings, Troy basketball took a step forward this past week thanks to its 2017 class signings. They kicked off the class with the commitment of Javan Johnson, a major sleeper out of the state of Alabama that, in a few years, will be the top of many scouting reports for his opposition. The versatile and high upside wing was originally the lone member of the senior crop for Troy but quickly, Phil Cunningham and his staff went to work by picking up the services of Malik Burnett. Originally headed to Longwood, the 6-foot-2 guard is one of the top shooters from the south and together, Burnett and Johnson might allow for the next step to be taken by Troy in the not-so-distant future.

Rob Ehsan’s first year as a head coach has already been met with some adversity thanks to his starting lead guard, Nick Norton, going down with a torn ACL. There’s still hope for the future, both the short-term and the long-term, especially thanks to his 2017 class. Heading into the period, UAB already sat within the top of the league’s class rankings thanks to the commitments of Makhtar Gueye and Scootie Bryant. Both took a pass on higher level programs and because of it, should flourish day one in Birmingham. Adding both of their signatures this past week, the CUSA bunch went a step further in cementing its backcourt with the commitment of Luis Hurtado. While things had dropped off a bit with the 6-foot-5 guard, his playmaking skills and willingness to make others better should not be underrated, where, together, the three-man class should keep the Blazers atop of the league’s pecking order moving ahead.

Another CAA program getting some love here but it would be difficult to not give the dues that Kevin Keatts and his staff deserve thanks to its 2017 class. Entering the early signing period last week, the Seahawks already held the commitments of two of the better competitors from the south in Brion Whitley and Evan Cole. Both saw their stock soar this past summer but each felt the urgency to call UNCW their home for next year. Ending the seven day stanza in style, Keatts went back to his former employer picking up the talents of one-time UCF commit and athletic swingman, Clayton Hughes. The 6-foot-5 Tennessee native is an excellent addition giving the CAA bunch one of the better mid-major classes nationally.

Okay, okay, we are going to get some flak for this but at the time being, let’s keep VCU within the non-power conference category. Whatever the case, Will Wade and his staff did some major work this summer, fall, and during the early signing period. Landing four talents from all across the nation, there is a lot to be excited about down on Broad Street. First, the Rams received the commitment and signature of top-75 guard Lavar Batts, the epitome of a go-getter that will excel within Havoc for four years. Where the A10 bunch did its most damage was in the frontcourt picking up three talents that each bring varying skillsets to the hardwood. Marcus Santos-Silva is an elite rebounder while Sean Mobley is a mix-and-match type that can be used as a point-forward in spurts. To finish things off, all that the Rams did was beat a litany of well-known programs and sign Mayan Kiir, a super hard playing and deceptively skilled big man, that gives the Rams a top-30 class nationally.

Just like UAB, Western Kentucky is another program to watch out for within the CUSA. Rick Stansbury has already turned the program around in Bowling Green but next year, man, the Hilltoppers sure do look nice on paper. While the games still must be played, the 2017 class might be the best yet for WKU. The headliner of it all is Mitchell Robinson, a top-10 recruit and one of the best shot blockers and rim-runners in all of high school basketball. The five-star did sign for WKU as did Josh Anderson, a versatile backcourt recruit that can play all three spots out on the perimeter. Completing things is Taveion Hollingsworth, one of the top in-state talents that will bring a scoring punch off the ball, becoming the cherry on top to a top-15 class nationally and the best within its league.