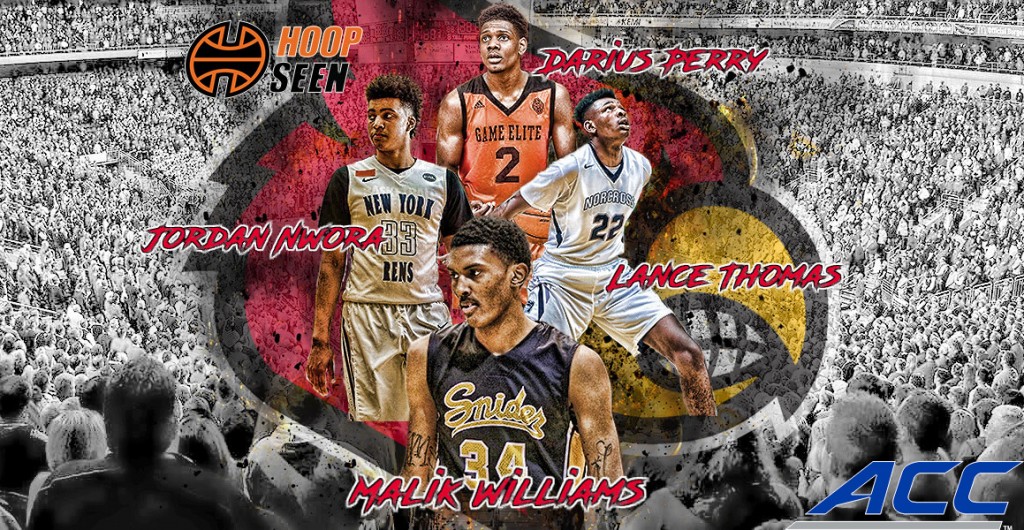 All eyes are on the ACC this college basketball season. Rightfully so. The league is stacked with terrific talent, Hall of Fame coaches, storied basketball venues and some of the best fans in the game.

Only five teams make the cut for the top 25 team rankings on opening day of the early signing period.

That will probably change as the top players in the class of 2017 make their decisions, some during the week and others during the season.

Interestingly enough, the highest rated player coming to the ACC as of Nov. 3 is Chaundee Brown. The Wake Forest bound guard from Florida checks in at No. 22 overall for the class of 2017. And what an important recruit he is.

However, the league is loading up with quality depth. And Louisville starts the story with a terrific four-man class.

Louisville has one of the best recruiting classes nationally for the 2017 group. It starts with five-star big man Malik Williams. The 6-foot-11 center from Fort Wayne, Indiana was nationally recruited and continues to improve upon his natural abilities. He’s the clear cut gem of a terrific class.

But he’s not alone. Darius Perry fits the mold of guard that has had success at Louisville in the past. Perry will have plenty of game tape of Terry Rozier, Russ Smith and Peyton Siva to help him ease into the combo guard role in the backcourt.

The Cardinals went after players that can knock down shots, too.

Jordan Nwora is the perfect compliment to Perry in pick and roll situations. The 6-foot-8 Nwora is one of the best shooting forwards in the class of 2017.  Lance Thomas joins Perry from the Peach State and there is plenty to get excited about with the long 6-foot-9 forward from Norcross, Georgia. He's at his best as a face-up four man.

Virginia Tech has the best incoming backcourt in the conference with Nickeil Alexander-Walker and Wabissa Bede coming to Blacksburg. Alexander-Walker, a native of Canada, committed to the Hokies early and that could one of the biggest recruiting steals of the 2017 class. Alexander-Walker has incredible ability at three positions. Bede was one of the premiere producers during the important July evaluation period.

Duke will certainly make a jump in the team recruiting rankings once some of the big fish jump on the line. The Blue Devils have a commitment from Milton (GA) shooting guard Alex O’Connell. Duke is a favorite to lock up likely McDonald’s All-Americans Wendell Carter and Gary Trent. Kevin Knox and Matt Coleman are also in there deep with the national powerhouse. There is potential to class overall in the country here if all four players come on board.

Florida State did a great job with in-state players in the 2017 class, pulling three of their four signees from within the borders of the Sunshine State. And all three - Anthony Polite, RaiQuan Gray and Wyatt Wilkes - are ranked in our HoopSeen125.

Miami has a sneaky good class. At the moment, the Hurricanes hold the top incoming point guard in Chris Lykes and power forward in Deng Gak. The real steal of the group may be Sam Waardenburg from New Zealand. The 6-foot-9 forward is an inside-outside threat at the four spot.

Clemson pulled off a major coup when power forward Aamir Simms committed to the Tigers. He has all-conference potential for Clemson and should be a contributor from day one.

Here’s something interesting. North Carolina has four commitments for the 2017 class but only one - Jalen Felton - is ranked in our HoopSeen125.