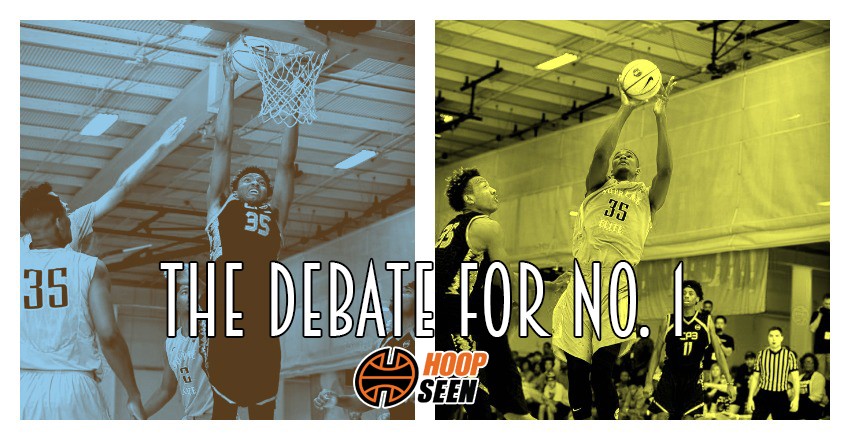 The debate will rage on as to who the best prospect is in all of the 2017 class. After releasing our updated 2017 HoopSeen Top-125 Rankings, Wendell Carter has kept the top dog status thanks to his super-efficient play on the Nike EYBL play and due to securing the gold medal at the U17s this past June. However, the battle remains thanks to the play of DeAndre Ayton, Michael Porter, Mo Bamba, and a few others from the elite crop of prospects within Carter’s class.

We asked our HoopSeen squad, who do you think is the top prospect in 2017 and in stating so, give your case for why they are the best.

Justin Young: I’ve long been a believer in trusting your own eyes when it comes to evaluating talent. “Believe what you see” an old hoop head told me one time. I believe that theory.

Always trust your gut. Your gut is usually right.

My gut tells me Wendell Carter will be the last man standing out of the class of 2017 when we look back on it 15 years from now.

I know what I saw when Carter played against DeAndre Ayton and Brandon McCoy, two guys that should easily get the nod for the McDonald’s All-American game. Carter’s performance was one of the best I’ve ever seen from a big man at the prep level in a decade and a half of watching the best of the best.

All Carter did was score 30 points on 13-17 shooting from the floor. He scored 24 points in the paint against two five-star players. Carter grabbed 16 rebounds and, by my count, had seven blocked shots.

It was a dominating performance on the court and in the mental game.

Carter then went on to play for the USA U17 team. He helped the US win a gold medal all the while averaging 10.1 points and 7.4 rebounds a game in just 15.3 minutes a game in Spain at the FIBA U17 World Championships. This was his second summer with a gold medal around his neck.

Sure, Ayton is a prospect with plenty of examples of production. Sure, he’s a 6-foot-10 multi-positional big man. Sure, he’s a dynamic talent with tons of upside. Carter may have some athletic limitations. He’s not as fluid laterally. He’s not a go-to threat as a pick and pop big man that seem to have prime real estate at the top.

I get all of that. I really do.

But, Carter is the most consistent elite big man there is in prep basketball. His best games come against the best players. And he delivers when the stage demands such a performance. Because of that, I can’t move Carter out of my number one spot.

Garret Tucker: The battle for the No. 1 spot in the 2017 class has been as good as any recent rankings for the top dog. After the summer travel season, I think three guys have distanced themselves and are in contention for the top overall spot in the class: DeAndre Ayton, Wendell Carter, and Michael Porter, Jr.

It’s a tough call, but I’m going with DeAndre Ayton as the top dog in the 2017 class. At 7-feet tall, Ayton has all the physical abilities and intangibles needed to be a successful player at the pro level. Better yet, he has everything needed to be a potential All-Star in the NBA. Some people have knocked Ayton’s lack of engagement and consistency, but it’s hard to deny his natural ability, especially after some Peach Jam performances. Wendell Carter is as solid a prospect as it comes and he will have a successful pro career, too, but I’m taking Ayton’s ceiling and upside in this one.

Carter Wilson: For me, the number one player in the 2017 class is unchanged from our previous HoopSeen national rankings, and that is Wendell Carter. Carter is coming off of a monster spring and summer period playing with CP3 as well as winning gold with the U17 United States team in Spain and a putting together good showing at adidas Nations in July. The Pace Academy (GA) big man has an elite combination of size and skill set and, out of the players grouped together at the top of the 2017 rankings, he has been the most consistent of the bunch this summer. I like how he projects to the next level, being able to fit in a variety of roles due to his diverse set of skills. Look for him to continue his good play during the high school season and further in his career at higher levels.

Corey Evans: Man, this may be the debate for the years to come. For as difficult as it was last year in arguing who was best between Harry Giles, Jayson Tatum, and Josh Jackson, we are in a similar spot again between the likes of Wendell Carter, DeAndre Ayton, Michael Porter, and Mohammed Bamba. For me, it comes down to a battle between the former two. Both are so similar, yet also so different. They dominate the floor and have a presence to them that exudes over onto the rest of their teammates.

I have been able to see Carter and Ayton play on the same squad whenever they laced it up in Anaheim last month at the adidias Nations, but have also seen both got at it twice on the Nike circuit. The first matchup had Carter dominate Ayton to a tune of 30 points and 16 rebounds. The second contest had Ayton win the battle with ease, though, not to create excuses, but the Carter defeat came on the heels of a cross the world excursion coming back from Spain following a gold medal victory at the U17s.

When it comes down to it, I give the final nod to Ayton. His motor has been questioned in the past but maybe the Bahamian native has turned the corner with his game and has matured further where all summer long, he ran the floor with a purpose and showed some alpha-dog traits that makes him such a unique prospect. While comparisons are very, very close, and honestly, we are just splitting hairs here as both should be tremendous college players and NBA pros, I do nudge my bets on the side of Ayton for the time being.