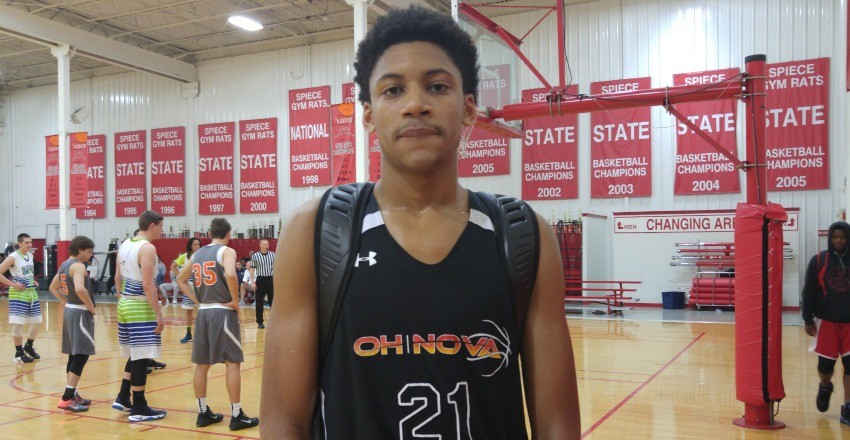 The Spiece Run ‘N Slam is always a go-to on the travel season schedule and this past weekend’s event lived up to expectations. Some of the top stars from the best programs out of the Midwest showed out but it was also a few others that firmly stamped their names onto the scene as break out candidates this summer.

STORM MURPHY, PG, MAC IRVIN FIRE, 2017: It is a bit criminal the fact that the only divison-1 programs involved with Murphy thus far, are those within the military realm. Making his debut with the Windy City bunch over the weekend, the 5-foot-11 floor general was superb and it seemed that any time that he had the ball in his hands, Murphy made the right decision. His feel and pace for the game allows for him to find the open man without getting sped up by ball pressure and it is his play making skills from off the ball screen that helped Mac Irvin make a run in bracket play even without two of its top prospects on Sunday. The Wisconsin native made it impossible for his coach to keep him off the floor and while his standing stature might hurt him from the highest level of play, his IQ, toughness, shot making, and abilities in making his teammates better defines Murphy as a major stock booster and break out from the weekend that was.

CHRIS VOGT, C, LOUISVILLE MAGIC, 2017: While a few more well-known names take up most of the pub for the Louisville Magic 17-under bunch, Chris Vogt showed major upside and production during his short stint in Fort Wayne. A mobile and hard playing 6-foot-10 big man with good length and hands inside, while his body is far from complete in filling out, the mobile junior displayed a lot of value moving ahead. He can struggle with physicality within the interior yet Vogt doesn’t back down from any sort of opponent that he faces and has deceptive skills with his back to the basket. He worked hard for his spot on the block and showed off a smooth hook that he can convert over either shoulder. Throw in the fact that Vogt scored a 30 on the ACT exam and it looks like the Kentucky native’s stock can only go up from here after a solid showing at the Spiece Run ‘N Slam.

AYO DOSUNMU, PG, MAC IRVIN FIRE, 2018: Nothing defines more of a break out from the weekend than Dosunmu, who came to Fort Wayne with a lone offer in his hand, and left the state of Indiana with one from the SMU basketball program. Having grown over three inches since last July, the Windy City native was impressive with his finishing skills at the basket, competitive edge on both sides of the floor, and take over abilities on the scoreboard. While Dosunmu still has some filling out to do, it is his willingness to lead his team and his energy within the miscellaenous that really displayed just how good the Mac Irvin product can be down the road. Dosunmu is just scratching the surface of where he can be and this weekend may be the springboard to a high-level recruitment in the nearby future.

STEVEN FITZGERALD, SG, LOUISVILLE MAGIC, 2018: How can we not include Steven Fitzgerald within our break out performers after putting up a 44-spot on the scoreboard. While he didn’t come close to that mark again throughout the remainder of the weekend, the fact that the 6-foot-4 guard was face-guarded in travel ball play says enough. Just three offers and limited interest have been received thus far by Fitzgerald though he used the large platform that was the Run ‘N Slam to loudly announce his name as high-level recruit within the 2018 class. His decision-making skills and scoring prowess are top of the line stuff and so is his toughness on the attack to the basket. Gear up because Fitzgerald is about to go from no-name status and into a prioritized recruitment once the college coaches get out again in July.

JEROME HUNTER, F, OHIO NOVA-TILLMAN, 2018: One of the major break out performers this past weekend that was not playing on a shoe sponsored team, Hunter was quite the watch as the mobile and smooth forward has all of the tools to be a high-major recruit. Very active for the loose ball and rebound chance, Hunter is a three-level scorer of the ball who brings great length and athleticism to the frontcourt. More of an undersized power forward at the moment, Hunter has the chance to develop into someone that can play either forward position down the road. He hit jumpers in rhythm all weekend long, posted up and sealed his man prior to receiving the entry where he then followed it with strong conversions in traffic, along with displaying good lateral skills in defending various spots throughout the half-court setting. Stony Brook became the first to offer the central Ohio native where things should really ramp up for the Ohio Nova star in the coming months because of his giant basketball ceiling and versatility on the hardwood.

KESHAWN JUSTICE, SG/SF, WISCONSIN PLAYGROUND WARRIORS, 2018: He doesn’t get all of the dues for his Playground Warriors crew, yet Justice showed off major developments within his skillset and a bigger, taller physique this past weekend in Indiana. The 6-foot-6 wing can play make some and in either direction and has become much better in hitting the open jump shot whenever presented with the opportunity. Bringing good size to his spot on the floor along with a consistent mindset, Justice is due to see his stock improve in July. Tyler Herro and Jordan McCabe take up most of the talk around the WPW 16-under team, yet don’t forget about Keshawn Justice as a slew of higher-level programs are beginning to show attention to the Wisconsin native.

JAKE HILMER, PG, IOWA BARNSTORMERS, 2019: While he doesn’t look the part just yet, a lot can occur over the next few years before college play begins for Jake Hilmer. At the time being, the intellect, passing skills, and utter toughness out of the Barnstormers guard presents major issues for the opposing bunch that the 5-foot-10 guard faces off with it. He can convert from off the catch and on crafty runners in the lane but it is Hilmer’s ball possession skills and ability to find the open man nearly every time down the floor that really impressed throughout the course of the weekend. A complete gamer with a tremendous feel and control of the floor at the lead guard spot, Hilmer is a primary reason for his team’s success and should be a well-talked of recruit in the future.