UNC and Duke make their pitch to Jairus Hamilton 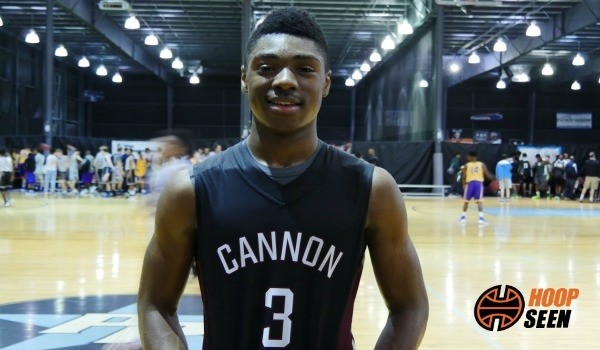 Very rarely does a program like North Carolina offer a sophomore in the high school ranks. This past winter, not only did UNC offer one sophomore, but three in all from within the state’s borders. Rechon Black, a 6-foot-7 point-wing type, accepted the offer, while two others, Devon Dotson and Jairus Hamilton, have continued to sift through the process. Hamilton, a 6-foot-7, do-it-all type with the body to boot, has continued to develop his game, prospering in the meantime, yet also sort through his early, blueblood recruitment.

A native of Charlotte, North Carolina, Jairus Hamilton has the ideal size and premier upside at the small forward position. He isn’t the greatest of shooters in the world yet but he does exhibit an excellent motor, defensive versatility in guarding the shooting guard spot on down to the power forward position, and displays immense play making abilities off of the attack to the basket. Toughness is never a holdup of his and neither is his ability to rebound the ball from in and out of his area.

A product of the Cannon School, while his squad’s season did end as he might have liked, Hamilton has remained upbeat about the past few months. “It went really well,” the sophomore stated. “We lost in the first round of states but we did well besides that.”

Planning on running with the Team Loaded travel bunch this spring and summer, schools have already begun to make Hamilton a priority recruit and outside of his UNC offer, others such as Virginia Tech, Tennessee, and Wake Forest have joined the fray.

While Danny Manning has also hosted the Concord School star, Hamilton made a visit to two blueblood programs recently.

North Carolina hosted the 6-foot-7 forward the day after offering him at the end of January and then again for the first UNC-Duke meeting in Chapel Hill a few weeks later. “It was amazing,” Hamilton told HoopSeen. “I liked the school a lot and the players and coaches were great. It’s an amazing place.”

Not to be outdone by UNC, its arch-enemy, the Duke Blue Devils, hosted Hamilton this past weekend for the meeting between the two winning programs. "I thought it went great," the Team Loaded product said. "It is an amazing place and the atmosphere was great."

While no offer was given out on the visit, Coach K and his staff remain high only the elite sophomore. "They are highly interested in me and are coming down soon to see me work out," Hamilton added.

Entering the summer with offers from three ACC programs will immediately make the Carolina native a must-watch for the best of programs on the national level as Kentucky, Kansas, Michigan State, UCLA, NC State, and Maryland have already laid down the groundwork with him. However, it would seem that those within the state of Carolina may have the best shot at landing Hamilton, whenever that day might be.