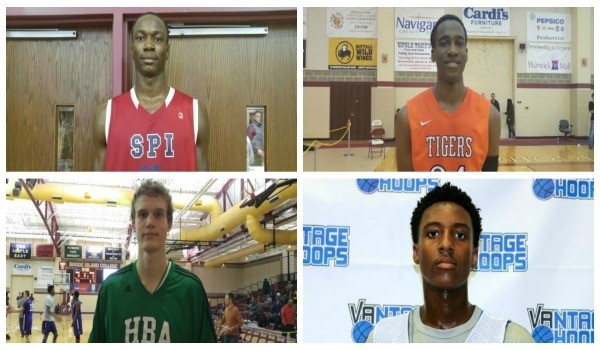 While the month of February may be the shortest of any of the months on the calendar, it sure did treat me to a few lessons along the way. The roads led to various gyms throughout the northeast and the New England area and in doing so, Cheickna Dembele showed his face as a high-major recruit, Arizona has one of the most underrated prospects within the 2016 class, and the talent headed to the Ivy League continues to hit next level status.

With many programs striking out on some of their top targets within the 2016 class, the higher level rung can oftentimes step down a level in grasping for a prospect that might be better off competing at the mid-major level. However, Cheickna Dembele, a 6-foot-10 center at Scotland Performance Institute in Pennsylvania, is no mid-level recruit. The native of Mali first entered the scene at the National Prep School Invitational and ever since, his stock has continued to escalate.

Entering the month with one offer, that coming from Phil Martelli and the St. Joe’s Hawks, things changed and in a rapid fashion where Iowa State, NC State, Charlotte, Missouri, Providence, and LaSalle all joined the fray in the pursuit of the big man with an offer of their own. It was earlier this month that I made the three hour drive to SPI to see the big fella in the middle of rural Pennsylvania and while finding the school may not be the easiest, it still brought in head coaches from Providence, Penn State, and NC State, along with assistants from St. Joe’s and Syracuse for Dembele. Very rarely do head coaches go out of their way in the middle of conference play to go and watch a prospect. However, the active and hard playing big man is not just any prospect. Dembele is one of the best available big men left on the board within the 2016 class and a top-150 recruit nationally. Buckle up because things are far from over and as more programs get a look at him and desire another big for next college basketball, the SPI senior’s recruitment will only continue to hit new heights this spring.

SEAN MILLER HAS HIMSELF QUITE THE OFFENSIVE WEAPON

While this year’s class headed to Arizona isn’t quite complete just yet as Sean Miller and his staff are heavily in the mix for five-star prospects Josh Jackson and Rawle Alkins, the Pac 12 bunch hasn’t received a ton of praise for its 2016 class. With two commits in tow, the latest coming from its only American born recruit in 6-foot-4 play making guard Kobi Simmons, the prospect that is getting swept under the rug some is Lauri Markkanen, a 6-foot-9 big man out of Finland.

A few years back, Arizona landed an early commitment out of TJ Leaf, a very skilled face-up forward within the 2016 class who decided to part ways with the Wildcats and is now headed to Westwood in the fall. However, Markkanen should more than suffice and if he would be playing out his high school ball in America, the skilled and offensively potent forward would be seen as a McDonald’s All-American type. He can score the ball with either hand and over either shoulder from ten-feet and in and has a great feel for the game from the high post region in making the appropriate pass out of the double team. With the pending losses of Ryan Anderson, Mark Tollefsen, and Kaleb Tarczewski, the backcourt should be more than okay next year in Tucson but questions remain in the frontcourt. Hence, Markkanen, who could use a few more pounds of muscle gain in the coming years, should be a major weapon for Sean Miller straight out of the gates as a guy that can play either the power forward or center spot along with showing similar versatility on the defensive side of the floor.

Much has been made about the talent that Harvard has had on tap these past few years along with its incredibly deep and talented 2016 class. However, with Yale, Princeton, and Columbia all fighting it out this year for the automatic bid for the NCAA Tournament, it is not just the Crimson that will continue to make noise in the years ahead. While the group headed to Cambridge in the fall is a special crop, let’s not forget that some of the others in the conference are also bringing in some special prospects.

Yale, currently in first place with Princeton in the Ivy standings, has a guy in Miye Oni headed to campus that can absolutely light up the scoreboard. Earlier this month, the 6-foot-6 wing finished with 52 points off of 11 made 3-point jumpers. Throw in his high level athleticism and James Jones’ bunch will continue to remain in the hunt for future titles.

Brown has continued to build, bit by bit, and bringing in David Erebor should bring even further success for Mike Martin’s bunch. Far from a finished product, the Maryland native is super long and plays with a quality motor. While he isn’t the most skilled of guys just yet, his energy levels and versatility should allow for the 6-foot-8 forward acting as a major nuisance on either side of the ball.

With Steven Donahue back in the Ivy League, the class headed to Penn next year is a solid bunch. However, no one signed by any member of the conference seems to be more ready to compete and produce at his future home than AJ Brodeur. The 6-foot-8 forward is a walking double-double for the super talented Northfield Mount Hermon crew. An excellent high-post asset, Brodeur has the makings of a potential all-conference guy and for multiple seasons, at that.

Princeton, still fighting it out with a few others for the automatic bid, have a solid three-man class headed to Jersey led by two solid perimeter shooters in Vittorio Reynoso-Avila and Will Gladson. Both can hit on consecutive jumpers with their feet set and should slide right in line along with their future lead guard in 2016 commit Jose Morales.

While he was nursing a minor injury this earlier this month, there aren’t as many as tough and as confident in all that they do as Bryce Aiken. While he may not look the part, the top-100 guard, who is headed to Harvard, can make shots with the best of them but is even better at running his team’s offense. With Siyani Chambers back in the fix next season along with current starting lead guard Tommy McCarthy entering his sophomore campaign in the fall, Tommy Amaker’s crew might have one of the more talented cupboards of lead guards in all of America.

PROGRAMS WILLING TO GET AHEAD

While there are still a good amount of programs hoping to solidify its 2016 class in the coming days, a few others have been able to get ahead these past few weeks in February. High-major or not, there were quite a few nice nabs this past month which should pay major dividends in getting ahead in the future classes.

Creighton struck to get the month kicked off on Super Bowl Sunday and in a major way. While many believed that Mitchell Ballock, a 6-foot-5 wing out of Kansas, would remain in state and commit to the Kansas Jayhawks, the Blue Jays swept in and landed the sharp shooting wing. An ideal fit for Greg McDermott’s system in Omaha, Ballock to the Big East bunch should be quite an asset in the years ahead.

Providence surprised quite a few, just as well, when they picked up a verbal commitment out of Dajour Dickens. The 6-foot-10, mobile and high ceiling center, was thought to be a guy that would remain within his region and possibly his state that is Virginia. However, the Friars swooped in and landed its third 757-recruit in the past few years. With the need for size and length down low, Dickens should be a fine addition to the Big East bunch within the interior for the years ahead.

In finishing out the month, Illinois kept things close to home with DaMonte Williams. The 6-foot-2 combo guard is the epitome of a tough and hard-nosed prospect. He can score the ball in bunches and loves to get to the rim and finish off the and-1 opportunity. While the season hasn’t gone as planned for the Fighting Illini, Williams’ commitment definitely breathes some positive vibes into John Groce’s crew heading into March.

North Carolina went a step further in landing the best prospect of all those listed along with the youngest. Rechon Black, or Leaky, as some may know him, made the early call in committing to the ACC blueblood. Blessed with unbelievable length and major upside in the backcourt, the 6-foot-7 sophomore has some shades of Golden State Warrior guard Shaun Livingston to him and should be quite the weapon in a few years in Chapel Hill.

Sure, the future looks bright with the commitments to Creighton, Providence, Illinois, and UNC, but there were a few others mid-level commitments that should really help out each of the respective programs. Mount St. Mary’s absolutely stole one with Marvin Trotman, a 6-foot-5 wing out of Virginia. Capable of being recruited and competing within the higher levels, the NEC crew found a major two-way producer in the junior swingman. Along with him, Toledo snuck in and grabbed a verbal out of Marreon Jackson. The Ohio native plays alongside two high-major divison-1 signees yet Jackson has the ball in his hands for the majority of any given contest for his Garfield Heights crew. The rich get richer where the Rockets continue to add to their stable of quality talent.