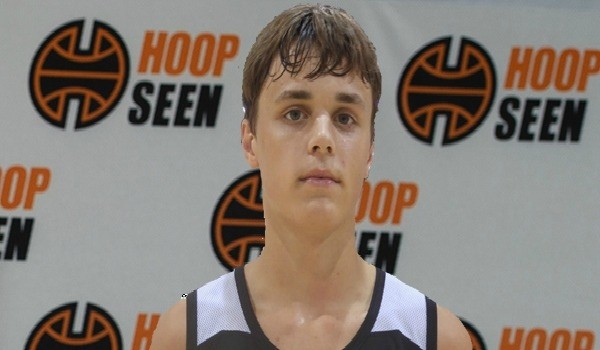 The past few weeks has been quite busy for Robby Carmody, a 6-foot-3 guard out of Mars High School, located 20-minutes north of downtown Pittsburgh. Already boasting a bevy of high-major offers and further attention, HoopSeen was able to catch up with the highly potent sophomore with where things stand with his recruitment and his ongoing high school season.

After finishing with 18 points in his team’s first round state tournament on Friday evening, Carmody was the catalyst for his bunch in reaching the district semi-finals. He has continued to add his overall skillset as a more consistent jump shooter of the ball but has also developed an impressive array of distributing abilities at the basket. A hard playing guard who has a great feel and intellect for the game, the Mars standout has quality amounts of athleticism at the basket and has become much more productive on the defensive end of the floor.

Attention has been heating up since running with the Ohio Basketball Club this past summer. Offers have rolled in from the likes of Duquesne, Purdue, Penn State, Cincinnati, and Xavier, along with a mixture of others showing interest. “All of the schools and coaches involved are just terrific,” Rob Carmody stated, the father and high school coach of the 6-foot-3 guard. “I can’t tell you how truly blessed our family feels and how humbling it is to have these coaches take time to get to know our son and our family.”

For as blessed as the family feels, the attention is warranted. One of the more promising prospects in all of America within the 2018 class, the elder Carmody was able to recap some of the more recent visits that the family took.

“The Notre Dame, Louisville game was crazy! When Pat Connaughton walked by and said hello, that was pretty cool,” the Mars High coach said about their time in South Bend. “It is a fantastic school and Coach Brey and his staff are great guys.”

“It was a great trip and it is just a fantastic, academic school,” Rob Carmody noted about their quick venture to the University of Michigan. “Coach Beilein was terrific and getting to spend time with the staff was really great.”

“The atmosphere at Purdue was just insane,” Carmody said when the Boilermakers knocked off Maryland last weekend. “It is a top notch school with great people. Coach Painter and the entire staff are terrific.”

Following the Purdue win, the families make the quick turnaround and were able to get home for a nationally televised contest between the hometown Pittsburgh Panthers and the Duke Blue Devils. “The atmosphere was terrific. Having the Zoo riled up is a unique setting,” Carmody told HoopSeen.

In all, the sophomore guard’s stock continues to soar and after being seen by Penn State last night in his team’s first round state win, Carmody continues to track as one of the more highly sought after shooting guards on the east coast within the 2018 class.