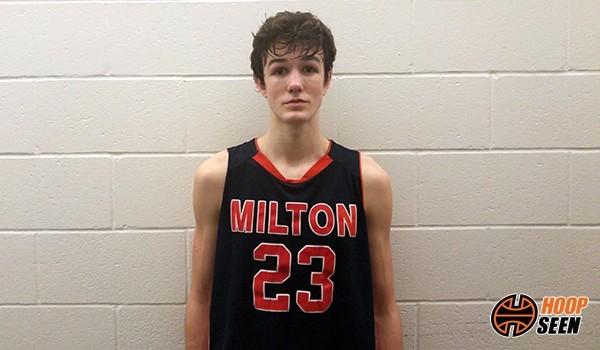 The New England basketball scene is always one filled with high-level college basketball prospects. Whether it is the terrain or the fact that many of the top powerhouse prep programs are located within it, the talent never seems to stop. On Wednesday evening, Milton Academy guard Cormac Ryan displayed everything that a college program might wish for in a prospect and he was able to give insight on his recent past and current recruitment.

Standing at over 6-foot-4 and with long, wiry arms, Ryan’s current physique isn’t quite ready for college play just yet. He doesn’t need to be though as he is just a sophomore at this time but the way that he goes about playing the game is much more mature compared to others. His instincts are top of the line and play making skills are not lacking either.

Capable of being played at all three spots on the perimeter, Ryan immediately hurts you with his long-range jumper, a shot that he wields with precise accuracy from out to 23-feet, where he can convert coming off screens, in spot-up situations, and off the drive moves. Throw in the Milton Academy sophomore’s defensive rebounding prowess, major breakdown abilities on the perimeter, and his willingness to defend on and off the basketball, and what you have is a very promising college basketball recruit.

Reclassing this past fall as a sophomore for the second straight year, Ryan is a native New Yorker and recently moved to Chestnut Hill, Massachusetts in August.

Running with the Middlesex Magic on the travel circuit, Ryan is beginning to see his recruitment pick up a little bit of steam. “Penn offered me last summer and I am getting interest from some of the other Ivy League schools,” the sophomore guard noted. “It was crazy,” Ryan said about his first offer. “I didn’t really expect it but it really boosted my confidence.”

With time now to put on the proper weight and continue to polish off his fundamentals in the backcourt, while programs like Brewster Academy and St. Thomas More may hog some of the headlines, expect to hear much more about the Milton basketball program and its future star in Cormac Ryan.