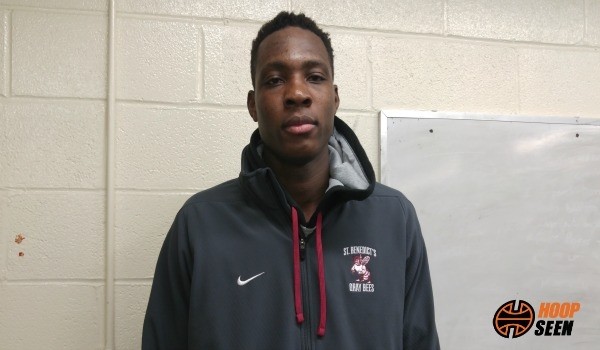 The Primetime Shootout is the last major high school event of the year before the playoffs and tournaments begin throughout the nation. On Saturday, things got kicked off at the gym at Roselle Catholic High School in New Jersey where some of the best teams throughout the state and a few outside of it hit the hardwood. Signed seniors like Omari Spellman and Arnaldo Toro each showed why they are valuable recruits but it was the play of Bourama Sidibe that stood out the most.

BOURAMA SIDIBE, C, ST. BENEDICT’S, 2016: With it getting later and later in the year, more and more college programs are in the hunt for a big man that can do something worthwhile on the playing floor. On Thursday, it was Sidibe, a 6-foot-9 center, which showed some long-term value as a rim altering, high motor center down low. While things are still in question whether Sidibe will come out this spring or take another year to get his grades in order before heading to college, what isn’t up for debate is Sidibe’s two way production. He runs the floor with a purpose as he can make great track down shot blocks on one end, yet also finish in transition on the other with the one-handed jam. A pogo stick at the basket on the rebound snatch, Sidibe is a lot more polished than originally thought as he converted on hooks over either shoulder and even hit a face-up jumper. Planning on sitting down and setting up visits next week, Sidibe showed that he is well worth a heavy recruitment late in the 2016 recruiting cycle.

OMARI SPELLMAN, PF, ST. THOMAS MORE, 2016: It wasn’t the best out of Spellman during his first half against the pesky and tough-nosed Patrick School bunch. However, that all changed in the second stanza as the 6-foot-8 big man showed off his confident and smooth outside jumper as he hit on three 3-pointers within two minutes of each other, bringing his team all of the way back into the lead, a lead that they would eventually hold onto. What makes Spellman so good is just how unique he really is. While he doesn’t look the part of an outside threat with his thick, strong body, the St. Thomas More star can get it going from off the catch. He can also post up some on the block and has a nice turnaround jumper from the mid-range area. Headed to Villanova next fall, Spellman continues to redefine his body which has allowed for a few easier looks and finishes at the basket. He competed all game long, produced on the offensive end, and worked on the glass; Spellman is going to be fun to watch in the guard heavy lineups in the coming years within the Big East and allow for various lineups placed onto the floor by Jay Wright and his staff.

ARNALDO TORO, PF, ST. BENEDICT’S, 2016: It was the best that I had seen Toro play all year long as the 6-foot-8 big man finished with 25 points and 13 rebounds in the win on Saturday evening. He set the tone down low with physical play as he finished off a number of put backs and one or two dribble back downs that led to easy baby hook shots. Throw in the fact that Toro can step out and hit the deep jumper, something that he did on two separate occasions, and the George Washington signee is going to be a solid, four-year guy for Mike Lonergan and his staff in DC. He competes with a solid motor, has fine hands, and is getting much better laterally in defending away from the basket. Add it all up and the St. Benedict’s big man should be a fine asset on either end and a scoring threat on any given night within the Atlantic 10 Conference.

JAGAN MOSELY, G, ST. ANTHONY’S, 2016: Another Big East signee, Mosely is headed to the Hilltop and already shows off a college ready body and an egoless mentality that should allow for immediate buy-in come next college basketball season. The Georgetown commit has been nitpicked for his shaky shooting numbers but what shouldn’t be swept under the rug is the consistent mindset that the Jersey native always has on tap. Standing at 6-foot-2 but with a 6-foot-9 wingspan, Mosely can practically lock up every spot on the floor besides the center position. On Saturday, Mosely didn’t do a ton of scoring but it was his pressure on the basketball that he exerted, victories within the 50-50 plays, and quality dribble drive and passing skills that really stood out. Mark it down, Mosely might not have the glitziest of games, but he is a winner and could become an All-Big East type defender in the coming years.

RICHMOND ARIRIGUZOH, C, TRENTON CATHOLIC, 2016: Another quality, late-year big man that is still available, the Trenton Catholic product had a good go of it to get the day off and running on Saturday. Aririguzoh, who hails from the Italy, sports a long but developing body that he uses well in getting his spot down low. He never takes a play off and as the game goes on, it seems that the big man’s motor and energy levels actually get better and better. Whichever the case, the intriguing big man has great hands and some deceptive ball skills as he can use either hand around on the basket on finishes, rebounds, and shot blocks, the latter being something that he did greatly on Saturday. He can also face-up and hit the mid-range jumper and also pass the ball accurately from the low post region. Several of the Ivy League programs are involved for him thus far, a league that Aririguzoh would really shine at in college.

MAKHI MITCHELL, C, BISHOP MCNAMARA, 2019: The loaded backcourt at St. Anthony’s jumped all over Bishop McNamara early on where, at one point, the scoreboard read 19-to-2 in favor of the Jersey based program. However, the DMV program fought back in the second half, primarily due to the play of a Makhi Mitchell. With his twin brother sitting out due to a lower leg injury, Mitchell attempted to dominate the paint. Built with a quality physique that should allow for much further physical development within the strength category, Mitchell is already pretty well developed near the basket. He can convert on counters moves while heavily guarded and even attempted a lefty hook, a shot that he was fouled on. He has great hands that allow for him to rebound his area on the glass, is a fairly physical shot changer in the lane, and exchanges ends well whenever the game picks up. Though he boasts no offers to date, Mitchell has the makings of a priority recruit for those throughout the eastern seaboard.

Brown seems to be the most talked about program in pursuit of Trenton Catholic big man Richmond Aririguzoh.

One of the better big men in the 2019 class nationally, Makhi Mitchell doesn’t hold an offer just yet, though Maryland, Georgetown, Villanova, and Xavier are showing early interest.

With a full docket of college basketball games taking place throughout America on Saturday, there weren’t a lot of coaches out and about but those that were seen included assistants from VMI, Saint Peter’s, Monmouth, and Canisius.