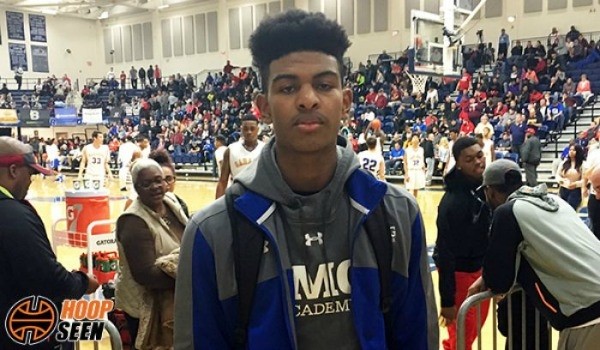 Much was said over the weekend pertaining to a product of the IMG basketball program. Jon Isaac, a 6-foot-10 forward, brought to light that fact that he could forgo his career at Florida State and enter his name into the NBA Draft. However, Aleem Ford, a 6-foot-7 forward and a teammate of Isaac’s, also displayed what makes him a well-prioritized recruit during his time in Providence at the National Prep School Invitational.

The Georgia native is an intriguing prospect as he is very durable and mobile in getting up and down the floor along with playing various spots in the frontcourt. He can be used as a 3-man in due time because of his quality outside jumper and developing ball skills, yet also slide over into the small ball 4-position in attacking slower big men off the face-up and remaining active and engaged on the glass.

Sporting a frame that should continue to fill out an even further at the next level, Ford has seen his stock really pick up during his final year of prep play this winter. Travelling across the nation and competing against the best alongside his talented IMG teammates, several schools have come calling on him. “I have offers from Richmond, Marist, American, and Rutgers,” Ford said. Following his contest on Thursday, St. Louis joined the fray by dishing one of their own out to him.

Others such as San Diego, Georgia, Georgia Southern, and Hofstra have also begun to bring more interest to the table for the versatile 6-foot-7 forward.

While he has not taken an official visit thus far, there are two schools that stand a good shot at landing the first chance to bring the IMG senior to campus. “Rutgers and Richmond are two schools that I might want to visit at the end of the season,” Ford told HoopSeen.

Being able to play the small forward position and stretch the floor in the half-court setting appeals greatly to Ford. While the interest and offers are more than satisfactory for Ford at the moment, it would appear that before things come to an end, that many more programs from the higher levels will get involved with the productive rebounder and shot-making forward out of IMG Academy.