Aaron Thompson zeroes in on recruitment 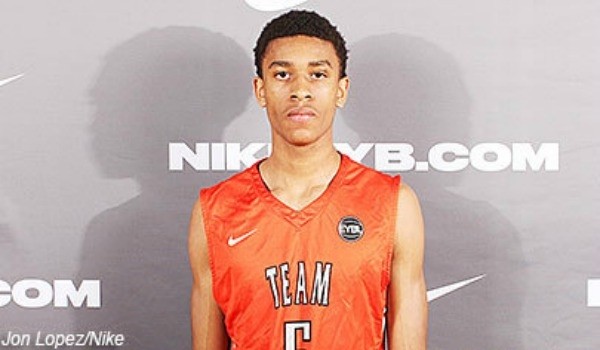 While his numbers and playing style may never wow you, Aaron Thompson is one of the steadiest lead guards within the 2017 class that one might find. After running the show again at the talented and always successful Paul VI basketball program in Virginia, the 6-foot-1 floor general is ready to immerse himself within the recruiting process.

The lefty, who has deceptive athleticism at the basket, finds comfort in setting the floor for his team within the half-court setting. He is a ball mover who creates for others and really buys into making others better from off the first few dribbles. His feel and pace to the game are second to none and while many have nitpicked his ability, or lack thereof, in scoring the ball, what one must admire in the Paul VI junior is Thompson’s dribble-drive skills and premier, on-ball defense.

Lacing up the sneaks again with the Team Takeover 17-under bunch this summer, Thompson has a few days off before his state tournament begins and will put it to good use. Instead of hanging around the DMV this weekend, the play maker will head off to Vanderbilt on Saturday. “Coach (Adam) Cohen has done a great job of recruiting me,” the junior said. “I like them a lot. I love their style of play and it’s also a great academic school.”

While it does seem like the SEC bunch may be in a good spot for him, there are a few others in heavy pursuit. “Temple is talking to me a lot, and is so SMU, Georgia Tech, and Nebraska,” Thompson told HoopSeen. All programs mentioned have already offered, joining such others as Virginia Tech, Miami, Penn State, Rice, and VCU.

Entering his senior summer in several weeks, Thompson fits the mold of what a head coach may want in its starting point guard: a guy that can his team without turning it over, creates for others, and defends the basketball. Add it all up and it looks like the Paul VI star has the makings of a priority recruit in the coming months.