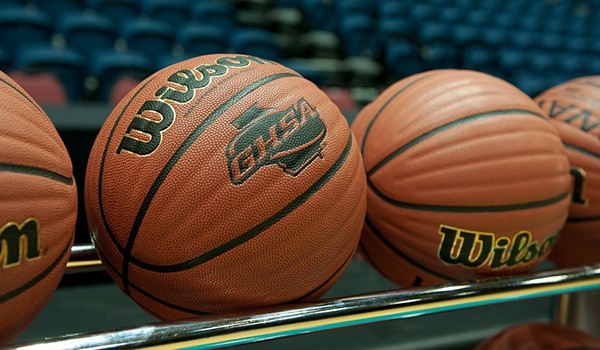 As the regular season gets closer and closer to completion, we want to get out to as many big match-ups as possible. We spent Saturday bouncing around Atlanta and caught two important games. Here are six takeaways on a doubleheader Saturday. We saw Sandy Creek defeat Fayette County 76-64 and Pebblebrook beat Langston Hughes 72-48.

1. Pebblebrook’s defense. “I told our guys in the locker room just now that was our best defensive game we’ve played this season,” Pebblebrook head coach George Washington said. Washington is right. The Falcons got right into the guard-heavy Langston Hughes team. Shots didn’t want to fall for LH and Pebblebrook took advantage. Sophomore guard Dwight Murray was the beneficiary of quality passing from Jared Harper (see below) and how much the Langston Hughes defense looked to super scorer Collin Sexton. The Falcons sit atop Region 3-AAAAAA, the state’s best region, with a 10-1 record.

2. We see this all too often in high school hoops. After the junior season is completed, the file is closed on college-bound players. Whatever the opinion is after July, it stops there. That seems to be the case more times than not. Because of that, Pebblebrook guard Jared Harper has been called “a shooter” and the conversation moves along fast after that. He is a shooter. A darn good one at that. But he’s getting better and better as point guard. He played very well against Langston Hughes, going for eight assists in the victory. He’s becoming a much better floor general. Defensively, he moved his feet quite well, too, and played a role in Langston Hughes’s offensive struggles. Harper is even better than he was at the end of July. And that’s great news for Pebblebrook.

3. Collin Sexton is one of the top scorers in the South. The junior can shoot, power his way to the rim and get to the foul line. The common thread between all three levels of scoring is his effort. Sexton goes max effort all the time. Hard to find players that go full bore all the time anymore. That will serve him well moving forward.

4. Christian Turner shined on Senior Night for Sandy Creek to the tune of 20 points, seven assists, four steals and four rebounds. Turner has logged serious minutes over the years as the go-to guy for the Patriots and pilots a very good team. Teams that go deep into the playoffs usually have an experienced floor general that calms the waters in late February and early March. Turner is an important piece to the Sandy Creek post-season puzzle.

5. If Sandy Creek plays like they did on Saturday evening, the team can do some good things in the post-season. Collectively, the Patriots were good where it matters. Junior Elias Harden scored all over the floor. Keith Heard blocked shots, scored at the rim and took Turner’s passes to the iron. Duke football commit Javan Jackson gives the lineup experienced toughness. Evan Hester came off the bench and played well, too. Steady point guard + length on the wing + rebounding/shot-blocking in the post + depth = really difficult team in the post-season to play.

6. Fayette County is no stranger to college basketball players. Coach Andre Flynn has had his share of high-level prospects over the years at the south suburb school and it looks like 6-foot-7 forward Noah Gurley could be next. Because the team - like most teams in Georgia - lacks size inside, the thin junior mans the five spot and did a pretty good job against a Sandy Creek double team all night long. Gurley is a thin forward that can shoot the face-up shot with ease.