Player of the year comparisons within the 2016 class 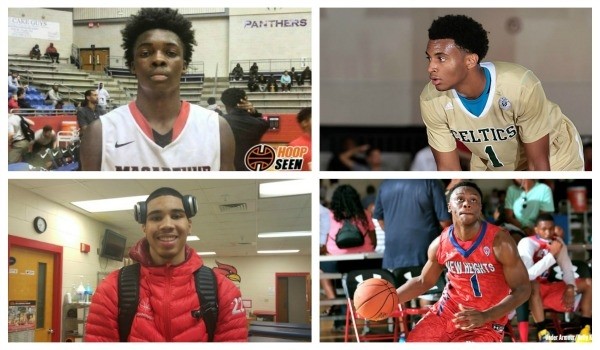 The national player of the year race is speeding up quickly as some of the top college ballplayers are throwing up quite the performances and on some of the biggest of stages. Entering the meat of conference play, this is where the cream of the crop separates themselves from the rest of the pack. Just the same, most seniors within the high school realm are beginning to see the end of their prep careers which brought us to the idea of, who compares to and could give a similar punch to a respective program that each of the top college player of the year candidates are showcasing this season?

The Oklahoma Sooner guard has had quite the senior campaign. After coming to the United States halfway through his high school career by way of the Bahamas, the Big 12 standout has gradually gotten better each and every year in Norman. Standing at 6-foot-4 and with a penchant for making timely shots and with a quality motor in the backcourt, the questions coming from the next level pertain to whether Hield is more of a primary guy on the ball, or more of a scoring type off the ball. The same can be said for Andrew Jones, a quickly developing and high ceiling guard headed to Texas in the fall.

Jones and Hield have very comparable physiques and both tend to base their game surrounding their jump shots from the 15-21 foot range. Each enjoys having the ball in their hands along with making jumpers from off the bounce. Hield is shooting a crazy 50-percent from beyond the arc but entered his senior campaign making a respectable 38-percent of his long distance tries. While Jones isn’t a 50-percent three-point shooter just yet, he can develop nicely into one and the shooting mechanics on each of their jumpers is eerily similar, just as well. Jones competes with a solid motor and is capable of becoming a versatile and physical defender at the next level. Chances are that he might not last four whole years in Austin but he could be the guy that, just like Hield, puts the Longhorns back on fertile ground as a possible national champion contender in the coming years.

Kris Dunn was a big time get for Ed Cooley and company in taking over at Providence a few years back and the same can be said for Pat Chambers and crew in Happy Valley whenever they landed Tone Carr back in the fall. Both have great size at the lead guard spot standing over 6-foot-4 and their playmaking skills are just the same. Dunn has always had the talent in the cupboard but staying healthy, cutting down on turnovers, and showing that he can hit the outside jump shot were some of the holdups with the All-American. Now in his senior campaign at the Big East program, Dunn has shown the ability to limit his lackluster passes along with hitting more consistently from beyond the arc.

Carr runs with the talented Roman Catholic bunch on the high school circuit and both the Philly native and Dunn are products of the northeast. A smooth playmaker with the basketball in his hands, the future Nittany Lion already is a solid decision-maker with the basketball in his hands and while his ceiling might not be as high as Dunn’s, Carr’s impact for the Big 10 program could be just as good. Sure, there is talent headed to Penn State with the 6-foot-4 playmaker, but Carr’s ability to create for others, defend various spots, but also now take over when needed, shows some comparable bullet points between himself and the Providence standout.

The transformation that Valentine has gone through the previous few years is quite commendable. Now the go-to guy for Tom Izzo in East Lansing, the 6-foot-5 forward has really developed his ball skills where his team relies upon him in creating for others within the half-court setting and fending off ball pressure whenever it is more evident. His 3-point shooting has always been a negative of the Michigan State senior as he made just 28-percent from deep as a freshman, but now in his final campaign within the Big 10 program, Valentine is making over 40-percent of his tries. Throw in his unbelievable versatility where he is averaging over eight rebounds and seven assists in any given contest, and it might be quite difficult to find a solid comparable counterpart for him. Future Michigan State wing Josh Langford could be that guy but a senior that fits the mold even better is Sacred Heart High standout Mustapha Heron.

Unlike Valentine, Heron has been a commodity recruit ever since he suited up as a freshman for Wilbraham & Monson alongside current Portland Trail Blazer forward Luis Montero and one-time UNLV big man Goodluck Okonoboh. Now a senior at Sacred Heart High School in Connecticut, Heron has become known for his playmaking abilities along with his great size standing at 6-foot-4. Best with the ball in his hands, it will be difficult for anyone to match the numbers that Valentine is putting up at the current moment but heading to Auburn in the fall, the New Englander will definitely have the appropriate chances to go to work early on. Plus, the cupboard isn’t that bare at War Eagle as Bruce Pearl will put such others as sharpshooting guard Jared Harper, big man Horace Spencer, and nice scoring piece in Bryce Brown alongside him and in two years, will have the likes of speedster Davion Mitchell and five-star big man Austin Wiley next to him. Thus, the lefty has the chance, if he can just like the Spartan senior, develop his perimeter jumper further, pull his own Denzel Valentine within the SEC program.

Okay, okay. The eye popping numbers that Simmons is putting up in the bayou is crazy. Hence, it is difficult to foresee anyone doing what the LSU star is showcasing for Johnny Jones and his program. Furthermore, for a program that doesn’t rely on having one guy do the majority of the work, the chances of a blueblood recruit exemplifying Simmons’ game next college basketball season might not be in the cards. I mean, Simmons is averaging nearly 20 points, 14 rebounds, and six assists per game for the Tigers who are making a giant move during the early portion of SEC play this winter. However, if there is one guy within the 2016 class that personifies the elite skillset that the Aussie does, all signs point back to Duke signee Jayson Tatum.

Unlike Simmons, Tatum was born and bred in the United States. Just as well, the one hold up with Tatum is in his ability to pass the ball, or lack thereof, the primary trait of the current freshman standout. It isn’t that Tatum doesn’t create for others but it is more so about his unbelievable skillset and the variety of ways that he puts the ball in the basket. Standing at 6-foot-8, Tatum is tremendous in high elbow post-ups and his use of the jab step in creating separation off his defender prior to the usual conversion is NBA-worthy, already. Just like Simmons, Tatum is a high volume defensive rebounder of the basketball who can wear many hats for his squad. Heading into his final year of high school play at Chaminade College Prep, many questioned the Missouri native’s ability to consistently hit the outside jumper, which seems to be the lone discrepancy with the LSU freshman’s game at the current moment. While all signs point towards Tatum not posting comparable numbers to Simmons next year in Durham, he definitely passes the eyeball test in comparing the elite skill levels of both of these capable one-and-done guys within the college realm.

Georges Niang hit the college basketball scene by storm with his impeccable mixture of ball skills, passing abilities, and not your typical body type. The forward is quite difficult in quarantining at a particular position on the hardwood; rather, he can be specified as just a ballplayer. The 6-foot-7 forward is having another high level season for Iowa State this winter posting averages of over 19 points, seven boards, and three assists per game in the frontcourt for the Big 12 program. Never to be known for his athleticism, the skillset out of Niang is quite difficult to come by. He has stuck around in Ames developing his overall game but has been ‘the guy’ for the past three years now. In the 2016 class, it is difficult once again in finding a comparison for him but it looks as if it is another skilled and versatile forward that fits the mold: Braxton Key seems to be the right guy for the job.

Just like Niang, Key will head off to a basketball program in Tuscaloosa that is dying to receive a breath of fresh air like Iowa State received a few years back. In the same manner, Key will begin his career under the tutelage of a former NBA standout in Avery Johnson, just as Niang did under now Chicago Bulls head coach Fred Hoiberg. While Key is a much better athlete at the basket, he is currently suiting up for one of the best prep programs nationally with the Oak Hill Academy bunch, similar to Niang when he spent his time at Tilton Academy before heading off to Ames. Key will be given the keys from the get-go and while he will have the chance to play alongside five-star wing Terrance Ferguson as both will be freshmen together next year at Alabama, the ball skills, passing abilities, and defensive versatility that Key brings to the hardwood should allow for immediate production within SEC play next winter. Where Niang made nearly 40-percent of his perimeter tries during his first season at ISU, Key will have to get better from deep but he more than makes up for this minor hold back in his game with his toughness and athleticism on the hardwood, thus he could one day post comparable numbers that Niang has done so within the Big 12 program.