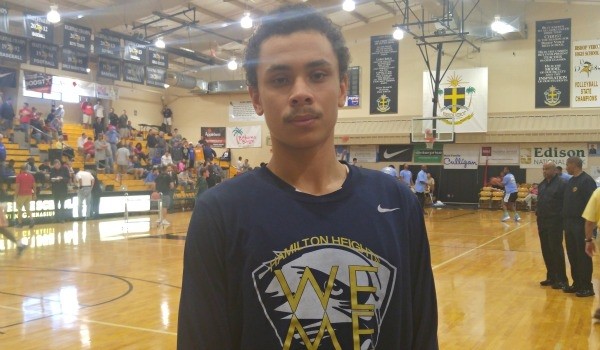 Shot makers are always a premium and one of the better junior recruits that has begun to solidify his name and stock as a quality scorer off the ball is beginning to see his recruitment pick up steam. Therren Shelton-Szmidt, a 6-foot-4 guard out of Hamilton Heights Christian Academy, has had a few break through moments during his first year at the Tennessee-based program and is seeing the hard work pay off.

Playing alongside two of his fellow Canadian junior guards in the backcourt for the talented Hamilton Heights crew, Szmidt might not get all of the pub that he rightfully deserves. Whether it is Abdul Ado, a Mississippi State signee this past fall, or Shai Alexander, who has already committed to Florida as a junior, or Nickeil Alexander-Walker, a 6-foot-4 junior who boasts several high-major offers, what the junior guard does can get swept under the rug. Not for long though where the solid presence out top is becoming a valued recruit within the 2017 class.

While guys that can put the ball in the basket will always be sought after, Szmidt could gain even greater precedence due to his perimeter shooting stroke and efficiency in finding its prescribed goal. Whether it is off the catch from deep or on the mid-range pull-up, Szmidt is someone that can be relied upon for making shots in any given affair while he can also defend various spots on the floor on the other end.

Running with the UPlay-Stackhouse Elite bunch on the travel circuit this past summer, the 6-foot-4 shot maker rattled off offers to HoopSeen recently, some of which he gathered during the summer and others that he brought in during the high school season. “I have offers from St. Bonaventure’s, Duquesne, Middle Tennessee State, and Appalachian State,” Szmidt said. On Tuesday, another Conference USA program joined MTSU in the pursuit of the Canadian as Old Dominion dished out an offer to him.

With a variety of schools now on board with Szmidt, there are a few things that he is looking for in a school. “I want a good coach that is going to develop my game, good people that will push each other to get better, and just a good program that wants to improve each day,” the junior stated.

Still with some time before any sort of condensed list is created, expect for further programs to get involved with him as he enters the always important senior summer.