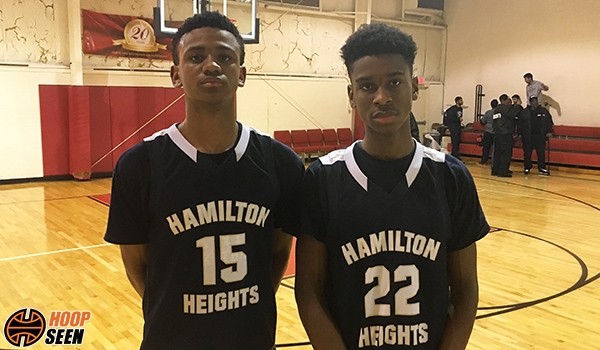 MARIETTA, GA — Tucked away in one of the most intimate gym in the Peach State, Hamilton Heights (TN) and Covenant Christian (GA) locked horns on a quiet Monday night. The result was a physical contest that featured no less than six Division I players. Here were the three biggest takeaways from the action at Covenant Christian.

The two played off of each other very well. One was always in the point guard role. The other was always ready to score.

Shai, who is headed to Florida, was the offensive force in the Monday night win. When the game was close and a push was needed, Nickeil took over from deep, hitting three straight three-pointers from the left wing.

Both are top 100 national level players in the loaded 2017 class. Both could be better than that, too.

Covenant Christian big man Chris Agbo has unmatched size and physicality in the high school game. His size rivals those at the professional level and he uses his brute strength very well. His game is all about intimidation and

I’ve had to rack my brain on a player that possesses such size and power like him. Glen “Big Baby” Davis comes to mind. So does Udoka Azubuike. Agbo punishes people in the low blocks. Hamilton Heights, anchored by Mississippi State bound Abdul Ado, is a big team and they had no answer for Agbo in the middle.

Florida recently called on Agbo and his recruitment runs the gauntlet from high-majors to NAIA schools.

Shooters always shine. Our Corey Evans has long been a proponent of Therren Shelton-Shmidt and his value as a college prospect. The 6-foot-5 junior from Canada was impressive in Hamilton Heights’s win on Monday night.

He “only” hit two three-pointers but his skill set will allow him for more in other games. He’s fundamentally strong with technique and knows how to free himself up for shots. Shooters are a dying breed at all levels of hoops. Guys like Shelton-Shmidt have value for all levels. Because of his perimeter weapons, paired with his attention on the glass, don’t be surprised to see his recruitment skyrocket after the spring.