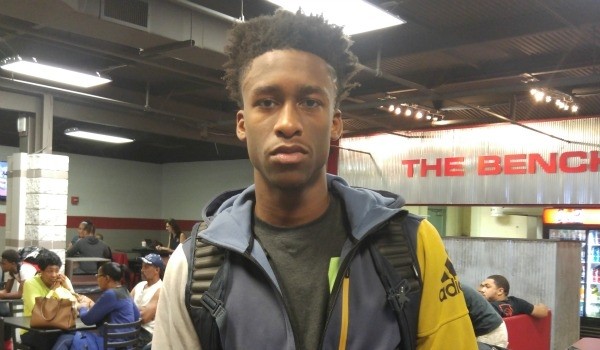 The Hoop Hall Classic got kicked off on Saturday morning with some of the best prospects and high school teams hitting the floor at Blake Arena on the campus of Springfield College. It was decision day for top-50 guard Kobi Simmons and all the attention was geared towards where he might be suiting up at next year. However, the St. Francis High product gave the fans some room for excitement with his time on the hardwood with a near triple-double in his team’s double-overtime win.

KOBI SIMMONS, G, ST. FRANCIS, 2016: In the evening, Simmons called his recruitment off by committing to the University of Arizona. Beforehand, the Peach State native had one of his most complete outings as he was one assist shy of a triple-double finishing with 34 points, 11 boards, and nine assists. He hit the glass with a purpose, converted on difficult step back and jab-step moves out to 22-feet, and attacked the basket and found his big men around the rim on the dump off pass. Now, Simmons can still take questionable shots but when in attack mode, the future Arizona Wildcat is pretty special. He kept his emotions intact throughout and while he fouled out before the second overtime session could begin, his squad was still able to keep their heads and defeat the Lone Peak bunch out of Utah.

MUSTAPHA HERON, SG, SACRED HEART HIGH SCHOOL, 2016: Wow. Heron showed some heroics on Saturday as the 6-foot-5, play making wing, did it all. While his outside jumper has been a downfall of his up until this point, Heron nailed two long distance jumpers that brought his team back before they fell to Foothills Christian. The lefty is a very tough and physical aggressor who loves to attack the creases within the half-court defense. He can explode through the contact at the rim and while he isn’t the most athletic of guys, Heron doesn’t fail to convert many and-1 chances. A guy that can fill up the stat sheet in any given night, the future Auburn Tiger did just that in the two-point defeat to a total of 31 points, 10 rebounds, four assists, and three steals. It was a win-win for the Bruce Pearl on Saturday as his squad knocked off Kentucky on the hardwood and had his elite recruit produce yet again on the grandiose of stages.

FRANK JACKSON, G, LONE PEAK, 2016: Headed to Duke next year, Frank Jackson threw up a 49-spot on the scoreboard in the double-overtime loss to St. Francis on Saturday morning. The 6-foot-3 guard is far from a polished product on the offensive end when it comes to his shot selection as he attempted 40 shots and 18 3-pointers in all. St. Francis did do a commendable job on him in clogging the lane and denying driving lanes and the work that Jackson can do out of the high ball screen is on-point. There still are questions pertaining to whether Jackson is a lead guard or a combo and in Springfield, the Lone Peak star seemed more like the latter. Regardless, Jackson is a high-character kid with two-way production at his fingertips as he defends with the best of them on the perimeter, has a strong body, and can be relied upon straight out of gates due to his potent scoring punch with the rock in his hands.

VJ KING, SF, PAUL VI CATHOLIC HIGH SCHOOL, 2016: The future of Louisville basketball continues to improve as VJ King, a 6-foot-7 small forward, has thrown more consistency and toughness within his repertoire. With the perfect physique to add more and more muscle mass onto, King has shown the ability to score the ball in traffic and also rebound it, just the same. The long and wiry playmaker can put up 20-points with rather ease and while that isn’t the name of the game with the Paul VI standout, he is capable of doing whatever it takes to secure the W for his bunch. Finishing with 23 points and eight rebounds in the win on Saturday, a Louisville assistant was on hand for his future star who only cemented himself as an elite wing recruit with the current senior crop.

TJ LEAF, PF, FOOTHILLS CHRISTIAN SCHOOL, 2016: Quite possibly the standout of the day, while Simmons, Jackson, and Leaf all lived up to the billing, it is the continued progressions that the future UCLA ballplayer has shown that intrigues the most. With arguably the best passing guard in high school ball headed to Westwood in the fall with Chino Hills standout Lonzo Ball, could the Bruins also have the best passing big man in TJ Leaf? On Saturday, the 6-foot-9 forward definitely looked the part. He constantly hit the open teammate before the double team arrived as he racked up seven assists displaying inept vision and awareness. However, the west coast recruit isn’t a slouch in the scoring category where he hit on several intermediate to long distance attempts, displayed a nice set of counters in the post, and has a great use of the upfake and gather before finishing through contact near the lid. In a complete effort, Leaf led his team with 30 points and 10 rebounds along with his several dimes displaying immediate production in the frontcourt during his stay within the Pac-12 program beginning next winter.

THON MAKER, PF, ATHLETE INSTITUTE, 2016: His team went down in defeat but it wasn’t due to Maker’s activities on the playing floor, or lack thereof. A guy that hangs his hat on how hard his play and his motor on either end, the Sudanese big man missed a triple-double by just two blocks. Finishing with 14 points, 10 boards, and eight blocks, Maker owned the middle against the Findlay Prep squad as he repeatedly threw shots away from the basket with a vengeance. Offensively, Maker still played a bit too fast and his decision-making needs further work. Best out of the high-post setting who can knock down the intermediate jumper or slash and score off his right hand, the ceiling is there with Maker. Polishing is needed but the 7-footer had another productive contest in Springfield and gave reason for excitement with where he can be five years from now.

SIMI SHITTU, PF, MONTVERDE ACADEMY, 2018: We profiled Shittu earlier in the week and even in our in-depth introduction to the Canadian, we still may have sold the 6-foot-8 forward a bit short. A giant motor guy who loves to run the floor and finish at the basket with athleticism, Shittu displayed a lot more ball skills and quality footwork in the lane on Saturday that we originally had seen. He converted on a face-up, spin, and finish through contact at the basket and even hit the big man on the block on the hard drive and dish. While he didn’t shoot it a ton, the sophomore does have great touch around the basket and is a solid rebounder of the ball who flourishes whenever the game speeds up. Shittu had it all working at the Hoop Hall Classic and should begin to see his recruitment heat up in the coming months as a prioritized, top-50 recruit within the 2018 class.

While we expect to see a lot more coaches out and about on Sunday where there was a loaded slate of college games on the docket on Saturday, we still spotted UMass head coach Derek Kellogg along with two of his assistants, and others from Kentucky, Purdue, USC, Rutgers, Seton Hall, Binghamton, and Florida State in the gym at Blake Arena.