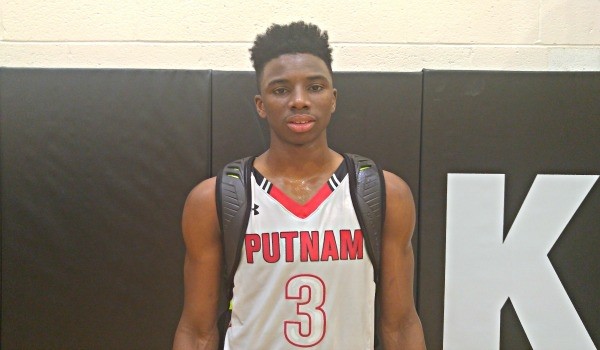 The second day of the Hoop Hall Classic took place on Sunday and some of the stars of the prep ranks hit the floor in Springfield, Massachusetts. While Bruce Brown and Taurean Thompson, two stars of the college game next year, each put together quality performances to get the day off to a solid start but it was Hamidou Diallo that showcased the entire arsenal in his dominant second half to finish off the evening at Blake Arena.

HAMIDOU DIALLO, SG, PUTNAM SCIENCE ACADEMY, 2017: At the half, the box score read three points off of 1-of-7 shooting from the field, seven rebounds, two turnovers, and two fouls. With his team nearly knotted up, Diallo took over and quickly. He played with aggressiveness, showed off his elite athleticism at the basket, knocked down mid-range jumper near the baseline region, and was a menace out atop of the half-court press defense. Before it was all over with, Diallo saw his stat line read 30 points off of 10-of-17 shooting from the field, 11 rebounds, and three assists. Passion and intensity is never an issue with the New Yorker and with a 28-point second half in front of Kentucky head coach John Calipari, the 6-foot-6 wing continues to show that he is on the upward trajectory with his game who compares favorably to Toronto Raptors star guard DeMar DeRozan.

BRUCE BROWN, G, VERMONT ACADEMY, 2016: One of the most consistent producers in all of high school and prep basketball, Bruce Brown was at it again. In a major tilt between his Vermont Academy crew and the always loaded Brewster Academy bunch, a game that featured nearly a dozen division-1 prospects, it was Brown that was dominant for spurts throughout. The 6-foot-3 maverick of a guard is one of the most explosive guys around as he has an elite burst on the blow-by, uses his college ready physique in absorbing the contact near the basket, and then can finish with consistency within the taller trees in the lane. Throw in the fact that the downfall with the Bostonian has always surrounded his outside jumper and the fact that he hit three deep jumpers from off the bounce and the future and development in the future Miami star really excites. Despite the loss, Brown dabbled in every category on the box score for a total of 37 points and 11 rebounds along with a few steals, dimes, and blocks to finish things off.

TAUREAN THOMPSON, PF, BREWSTER ACADEMY, 2016: One of the best big men still left on the board within the current crop of senior prospects, Thompson hasn’t stopped developing his game or his physique. A physical presence straight out of the gates, the 6-foot-10 big man is capable of taking the ball off the glass and leading the break where he can then make the appropriate pass thereafter. He is excellent out of the high-post setting and can attack the basket off his right hand. Fairly athletic off of two feet within the painted area, the Brewster product has developed a back to the rim skillset where the big man can convert over either shoulder and with good touch, regardless of the physicality of the defense that he is seeing. With Kansas, Seton Hall, Xavier, Georgetown, and Providence on hand for him, Thompson finished with totals of 23 points, 16 rebounds, six blocks, and four assists in the close win.

JORDY TSHIMANGA, C, MACDUFFIE SCHOOL, 2016: Just like Thompson, Tshimanga showed that he deserves some priority attention late in the game where he is one of the better 5-men still available within the 2016 class. The lefty, by way of Montreal, was the most active that we have seen him on Sunday where he ran the floor from rim to rim with a purpose, changed every shot in the lane, and absolutely pummeled the opposing bunch with his love for contact near the tin. With a soft, go-to hook over his right shoulder and a guy that does a commendable job of getting positioning on the block and sealing before the entry catch, Tshimanga is more in your throwback variety down low. Now, he does still have to get in shape further but sporting a giant wingspan, the 6-foot-9 center was the primary reason his squad pulled out the W as he finished with 13 points, 19 rebounds, and had numerous blocks and shot changes in the lane.

MOHAMED BAMBA, C, WESTTOWN SCHOOL, 2017: Fire and a motor: two things that Mohamed Bamba has sometimes lacked in consistent affairs. It seems that the New Yorker has turned the corner with his game and on Sunday, despite a lackluster first-half, the 6-foot-10 junior proved himself as an elite recruit within the 2017 class. Facing off against Udoka Azubuike, a five-star center within the 2016 ranks, Bamba did a great job of changing the Nigerian’s shots near the basket, beating the big man down the floor for the catch and finish, and sweeping board after board within traffic due to his elite length and quick leaping skills. While Bamba didn’t display much of the back to the basket game and his lacking frame furthered showed the need to gain a bit more muscle, the fact that he didn’t have the best of first halves, yet still finished with a triple-double, just shows how immense his upside really is. With some of the best programs in attendance on Sunday, Bamba had it all going during the stretch moments of his lone outing in Springfield as he finished with 13 points, 18 rebounds, 10 blocks, five assists, and five steals, and most importantly, the hard fought win.

BRIAN BOWEN, SF, LA LUMIERE SCHOOL, 2017: Bringing great size and a massive scoring punch to the floor, Brian Bowen did it all for his squad where he was the catalyst in his team’s win on Sunday evening. The 6-foot-7 junior loves to attack the basket off his right hand as he understands how to use angles and his body appropriately in getting the line on the attack. He can then convert on nifty running lay-ins off the glass which can oftentimes come in the and-1 variety. A versatile scorer of the rock, Bowen can convert from each level as he can nail the elbow jumper off the pull-up and hit off the catch on spot-up looks from deep. The Michigan native does have to create a bit more for others but it was his willingness to defend the 2-4 on one end, rebound the ball on each side of the glass, and carry his team efficiently on the scoreboard to a tune of 29 points off of 18 shot attempts, that really impressed in Springfield.

Pitt and Nebraska seem to be in good spots in landing the first two official visits out of Jordy Tshimanga while such others as Virginia Tech, Baylor, Providence, and SMU continue to pursue.

Udoka Azubuike, the big man from Potters House who was supposedly committing on Sunday evening, pushed the date back some but is still undecided on when it might be; UNC, Kansas, and Florida State are the three that stand the best shot at landing him.

Oshae Brissett, a 6-foot-8 junior forward with Findlay Prep, will take his first official visit to USC on the weekend of February 19; the developing prospect could reclass into the 2016 class this spring.

Though not suiting up at the event, Miami High junior center Zach Brown told HoopSeen that he will take an unofficial visit to UConn on Tuesday; NC State and Miami are the two other programs hastily recruiting the 7-footer.