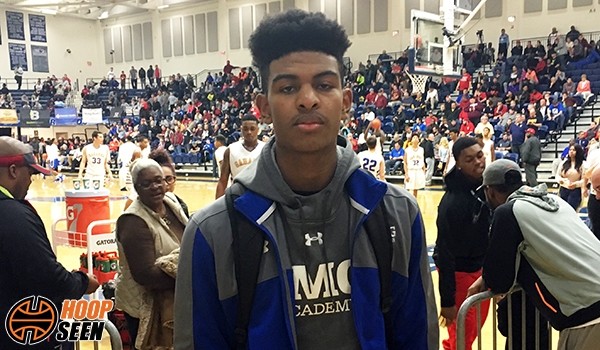 A year ago there were a host of Division II coaches wondering if Lawrenceville (GA) Archer forward Aleem Ford was a player their program needed to have. Some did but not a lot.

So, a post-grad year to the famed IMG Academy in Florida was in the works for the 6-foot-7 forward. Now Ford is considering offers from a handful of Division I schools. And his list keeps on growing.

Ford played well at the Flyin’ to the Hoop and has played well on big stages this season at IMG. When Florida State bound forward Jonathan Isaac is on the shelf with a foot injury, Ford fills the production void. He’s a skilled passer and a player with ever-growing confidence.

Already a full-qualifier, don’t be surprised to see Ford’s recruitment surge down the home stretch.

American, Marist and Rutgers have offered, Ford says, and he’s heard from Richmond, Hofstra, Georgia Southern and Texas State. Since the Flyin’ to the Hoops, he’s heard from Georgia.

Ford doesn’t have any visits in his short term plans and would like to play out the season and evaluate his options when the year is complete.

“I’m going to wait until after the season and see who is coming in. I don’t want to rush into anything,” Ford said. “I still think I have so much more potential.”

He’s right. Rewind back to his high school days in Atlanta’s sports-centric Gwinnett County. Ford was good but not a name that was tossed around in recruiting or coaching circles. Ford knew he still had work to finish.

“Playing at Archer I didn’t get as much exposure as I hoped I would get and then I graduated young, Ford said. (He turned 17 in December of his senior year.)

“I felt like I had a lot of potential and I could develop even more,” Ford said. “Throughout my high school career, I just kept developing. I started at 5-foot-10, 6-feet tall. I knew I could still develop. I didn’t really have anywhere to go after I was graduated (from high school). I knew I was better than the D2 level.”