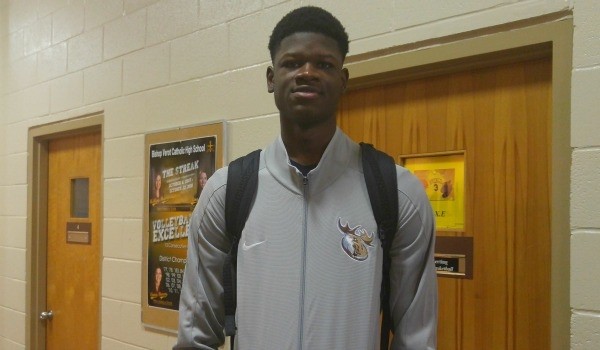 The Cancer Research Classic is always a must stop along the way during the high school season and definitely the best way to kick off the calendar year. Wheeling Jesuit University plays host to some of the top prospects and high school teams throughout the land and this year was no different. After taking a few days to decompress what I had seen on Saturday in West Virginia, there were three poignant items that stuck out to me the most during my day in the gym.

I have been watching Mohamed Bamba now for a year and a half. Not too long but compared to some others, a good amount. Upside and long term potential has always been spoken about when touching on the topic of the 6-foot-10 center. However, the more and more you watch the Westtown star, the more you begin to realize how special the elite prospect is.

Whenever one of the more respected analysts in the business remarked that Bamba may have the greatest upside out of anyone within high school basketball, I balked at the idea. However, as I have watched the junior in three separate events within the past month, the more I begin to realize that he may be right. Sporting a 7-foot-8 wingspan and a 9-foot-4 standing reach, Bamba is an elite prospect who is becoming a lot more productive in any given affair. He cleans his area on the glass with the best of them and has turned into a premier shot blocker of the basketball from in and out of his area. A hold-up of the New Yorker’s has been surrounding his motor but it seems even that has gotten much better as Bamba throws up double-doubles on the stat sheet without even having a play called for him. Sure, he must get add some strength and counters in the post, but the skill level is already laid down with him where he can finish with a go-to hook over his left shoulder, make the proper decisions out of the high post, and also convert the 3-point jumper with time given. Is Bamba the new age, more skilled version of NBA great Dikembe Mutombo? That is definitely up for debate but you’re going to need a pricey pair of binoculars to see the basketball ceiling on the improving and versatile big man out of the Westtown School.

JAYSOM TATUM: THE MOST SKILLED PROSPECT WITHIN THE PAST 10 YEARS?

Granted that I have only been in the scouting and evaluating business for five or six years now, but in my time within the game, no one within the high school realm has been more skilled and more polished than Jayson Tatum. Better yet, he is in how own, entire ballpark as the only other ballplayer that I have gotten the chance to watch multiple times that could put up and argument for this label is current freshman standout and LSU star Ben Simmons. That brings me back to the question as to who is the most skilled amateur ballplayer over the past several years?

Pondering this question for some time now, I asked someone in the ‘know’ who has been a part of high school and grassroots basketball for the past twenty or so years. His remarks were that outside of LeBron James and Kobe Bryant, that Tatum would be within the elite group of unbelievably skilled prospects during their high school days. Now, in no way was this analyst confirming that Tatum would go on to have the same NBA careers of James or Bryant, yet the work that the Chaminade senior has done up until this point is unbelievable. Many thought that Tatum had hit his ceiling last year where he couldn’t hit a perimeter shot to save his life, lacked ideal athleticism, and was more of a ball-dominant, face-up 4-man. Now, Tatum has shown the ability to hit outside jumpers with consistency, is capable of putting his opponent on a poster with the highlight dunk, and has gained quickness and furthered his ball skills in handling the rock as a wing. In all, Tatum is special to watch just as he was during his overtime win this past weekend at the CRC where he led his team once again with a somewhat easy and efficient 46 points on the scoreboard.

BRUNO FERNANDO IS A BAD DUDE

Like always, some of the more acclaimed seniors are playing the waiting game and won’t make a verbal commitment until they see who goes and stays within the college basketball realm this spring. Guys like Marques Bolden, Udoka Azubuike, and Jarrett Allen have taken up most of the attention as viable 5-men options that could immediately turn a contender into a national champion frontrunner next college basketball season. It is about that time that we start talking about Bruno Fernando as one of those select few that could change the outcome of the 2016-2017 college basketball season.

It is almost a year on the dot that Fernando came to the United States by way of his native Angola. Setting foot on the floor at the Hoop Hall Classic last January, Fernando intrigued many with his NBA-like body, toughness, and impact in the lane. Primarily just a physical punisher at the time, Fernando has come quite a ways within the past 12 months on the playing floor. Over the past few weeks, the 6-foot-9 center displayed the ability to hit a go-to hook over his left shoulder on the block, make the proper pass down low, and also convert once he gets to the foul line, a place that he has made a living at during his senior campaign. The Montverde star could pick wherever he wants to go practically, outside of some of the bluebloods that have yet to get involved with him, but the consistent production, killer mindset, and prospering skillset from 15-feet and in shows a high ceiling on the court and a maverick of a big man who should impact a college program immediately next season.