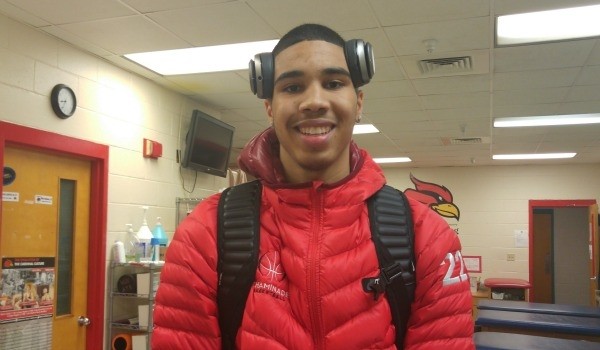 As always, the Cancer Research Classic brings in some of the best high school talent from across the nation and into the gym at Wheeling Jesuit University. This year was no different as a few of the top prospects within the coming classes suited up in Wheeling and it seemed that all of the elite talents brought their best to the floor but no one shined brighter than Chaminade five-star wing Jayson Tatum.

JAYSON TATUM, SF, CHAMINADE COLLEGE PREP, 2016: This is getting ridiculous. The senior campaign out of the Missouri native has been nothing short of remarkable. After torching the nets in Florida a few weeks back at the City of Palms Classic, Tatum was at it again on Saturday. Against the talented Huntington Prep bunch and facing off with five-star Michigan State signee Miles Bridges, the future Duke star did it every which way possible. While he failed to make any long distance tries missing on all five of his attempts, Tatum’s production out of the high post is absurdly good. Whether it is on the jab step into the stepback jumper, quick first steps on the attack and finish at the basket, or fadeaway jumpers going to his off-hand side, the Chaminade product can do it all. With the win in overtime after his own made conversion with less than three seconds remaining, Tatum continues to solidify his stock in my mind as the most polished high school prospect that I have ever covered where he finished with 46 points and eight rebounds and missed just one of his 13 foul shot attempts.

MARKELLE FULTZ, G, DEMATHA CATHOLIC, 2016: The product of the famed DeMatha Catholic program did everything that he could to keep his team in it until the very end with the deep Montverde bunch out of Florida. Fultz’s stock continues to soar as his feel and decision-making is hard to touch. Always an unbelievable shot maker of the ball from out of the mid-range area, Fultz had it going again in West Virginia as he nailed pull-up after pull-up and showed the ability to convert with a hand in his face. The DMV recruit’s ball skills have also continued to develop as he can make the right read and pass off the bounce and while I struggle believing the final stats that account for just one assist, I can more than believe his 31 points off of 12-of-15 shooting from the floor. Just like Tatum, Fultz failed to convert on just one long distance attempt but headed to the University of Washington next fall, expect for the 6-foot-4 guard to immediately make a large imprint on the Pac 12 program right out of the gates.

BRUNO FERNANDO, C, MONTVERDE ACADEMY, 2016: One of the best unsigned seniors at this time, Fernando was a one-time questionable decision in involving the big man within top-100 rankings. Now, after seeing him several times over the past two months, it would be hard to keep him out of the top-50 of most national rankings. The physical and bruising big man by way of Angola finishes everything at the basket and is a volume rebounder of the ball from within his area. However, the presence within the interior is more than just a bully where he has a balanced, soft hook over his left shoulder near the block and is comfortable hitting the foul shot once he gets to the stripe, something he did well on Saturday making nine of his 13 tries. With a motor that doesn’t stop and the ability to get out and guard the high ball screen without much of an issue, Fernando solidified himself as an immediate producer at the next level and in the win over DeMatha, chipped in with 21 points and 13 rebounds in just 18 minutes of action.

CHASE HARLER, SG, WHEELING CENTRAL, 2016: With tons of supporters in attendance for the first session of the day at the Cancer Research Classic, the hometown boy from Wheeling delivered in a major way. Chase Harler, a 6-foot-4 guard, got the event going with a cool 38 points as the future West Virginia Mountaineer did it every which way on the scoreboard. Whether it was by nailing the deep ball as he made three of his five attempts, slicing and finishing at the basket with the athletic conversion, or getting to his spots as he scores with efficiency at all three levels, Harler showcased the entire package. He even showed the willingness to get up and defend the opposing bunch’s best scoring weapon on the other end of the floor which would have made his future head coach proud. On the final stat sheet, Harler miss just three of his 15 shot attempts while failing to convert on just two of his 13 charity stripe looks. Some may question the ceiling with Harler but what you can’t question his intensity, competitive desire, and hard playing nature, which should make him a fan favorite in the coming years down in Morgantown.

QUADE GREEN, G, NEUMANN-GORETTI, 2017: Sure, his team went down in defeat but even the CRC committee had to give Green co-MVP honors in his game against the Gonzaga College High bunch out of the DC area. Where the Philly guard can oftentimes hunt his shots, Green was fabulous on Saturday in creating for his teammates on drive and kick dishes and with the swing pass out on the perimeter within the half-court offense. Now, he did struggle in finding his scoring touch were he made just three shots from the field, but it was his willingness to make others better with the ball in his hands that really impressed many in Wheeling. In just the third quarter alone, Green tallied seven assists where he ended up with 13 in all, making him the record setter for assists at the famed event. Throw in his seven points and nine rebounds and if the tough and active junior can find ways to efficiently score the ball while also creating for others, then his stock should soar as a top-50 recruit within the 2017 class.

MOHAMED BAMBA, C, WESTTOWN SCHOOL, 2017: While his team didn’t have much of a chance five minutes into its contest with the loaded and star filled API bunch out of Texas, Mohamed Bamba more than showed off his immense upside down low. Sporting a 7-foot-8 wingspan while standing at 6-foot-10, Bamba is a lethal rebounder of the basketball, especially on the offensive end of the floor. He cleans up everything in and out of his area due to his excellent instincts, elite length, and super soft hands and touch. The New York native is more than just a garbage guy where he can hit the cutter off the high elbow, has a go-to hook over his left shoulder in the lane, and also hit the perimeter jumper off the ball reversal. Throw in Bamba’s motor that has gotten better and better and his premier shot blocking skills on the defensive end of the court and the ceiling with the junior is mind-boggling. Further pruning of his game and more weight added onto his super long physique would be nice as it is difficult to project just how great the big man can be down the road, something that was in Louisville’s mind on Saturday as they offered the Westtown star immediately after his game in Wheeling.

TREVON DUVAL, PG, API, 2017: Duval is coveted as one of the best guard prospects in all of high school basketball and on Saturday back on the east coast, the Delaware native displayed everything that makes him special. The soft spoken junior throws shades of Derrick Rose at you with his quick twitch abilities from off the bounce as he is nearly impossible to contain off the first step and it his explosiveness in the lane that tops everything off. Where Duval primarily does his work from off the bounce, he did display a better looking jumper and much more confidence in it during his outing against Westtown. His feel, pace, and awareness on the hardwood is top of the line stuff and the talent base that Duval has built his game upon is no joke. The beginning of the high school season for the API crew hasn’t been the best but on Saturday, the star junior guard showed just why he is so important for any squad where, when the ball is entrusted into his hands, he can take over at any given time, whether it be by scoring at the basket, facilitating in the half-court setting, or defending on the other end of the floor.

As mentioned, Mohamed Bamba, a five-star big man in the 2017 class, landed a scholarship offer from the Louisville Cardinals program.

After visiting Maryland and Arizona in recent weeks, elite junior guard Trevon Duval spoke on condensing his list sometime soon and noted that he is hearing the most from Arizona, Baylor, Louisville, and Maryland.

Albeit out for the season with a torn ACL that he suffered back in October, 2018 Montverde Academy guard Marcus Carr spoke highly on Baylor and Vanderbilt.

In helping his Montverde bunch secure the win over DeMatha on Saturday, 2018 big man Simi Shittu spoke on recent interest from Alabama and LSU.

After hitting the game winning runner in defeating the Neumann-Goretti bunch out of Philadelphia, Gonzaga College High guard and sophomore playmaker Prentiss Hubb listed offers from Xavier, NC State, Cincinnati, Maryland, George Mason, and Penn State; his most recent visit was to Maryland back in June.