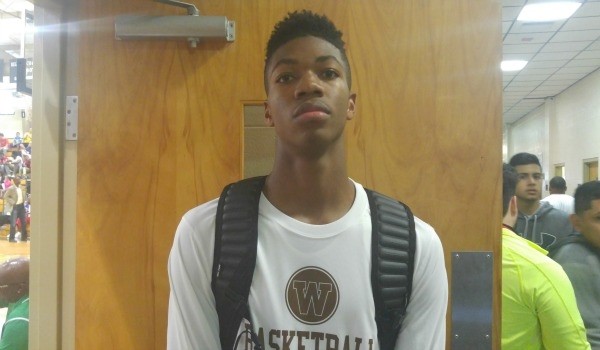 There definitely is no shortage of talent at the Westtown School this winter where it boasts a handful of high-level prospects in the coming classes. While guys like Mohamed Bamba, Cameron Reddish, Najja Hunter, and George Washington signee Jair Bolden receiving much of the attention, it is a new addition to the roster that has made giant strides in recent months. Brandon Randolph, a 6-foot-6 wing by way of the Bronx, New York, has quickly solidified himself as a high-major recruit within the junior class.

Making the transfer into Westtown this past fall, there was little known about the New Yorker. Sitting out the entire spring and summer months because of a knee injury that he suffered during the first day of the first open period in April, Randolph has shown a variety of capabilities that he already has in tow within his game and skillset.

A hard playing wing that competes with toughness, Randolph has already turned into a solid scoring weapon off the perimeter where he scored 20 points against the loaded API bunch out of Texas over the weekend at the Cancer Research Classic. Known primarily for being a shooter of the basketball from deep, the junior can really fill it up from off the catch. However, he has also shown the ability to put the ball on the floor and attack the basket where he finishes through contact off his right hand. His willingness to defend on the other end is there as he has the length and motor in containing and shutting down various positions on the perimeter.

Due to his higher ceiling on the basketball floor compared to most others along with his quality grades in the classroom, the consistent scoring weapon has a recruitment that is about to blow up. “Right now, I have offers from George Washington, Hofstra, and Quinnipiac,” the intriguing junior stated.

With many of the high-majors throughout the region showing more and more interest by the day, the well-spoken and intellectual Westtown wing spoke on what the things are that he has in mind when looking for a future home. “Academics are definitely number one for me. I am also looking to go to a school that is more of a run and gun type but I am open to anything,” Randolph told HoopSeen.

Developing by the day and becoming a lot more efficient within the same manner, expect for many more of the programs throughout the east coast to get involved with Randolph as he enters his senior summer this spring running with the PSA Cardinals bunch on the Nike circuit.