Three takeaways from opening night at City of Palms 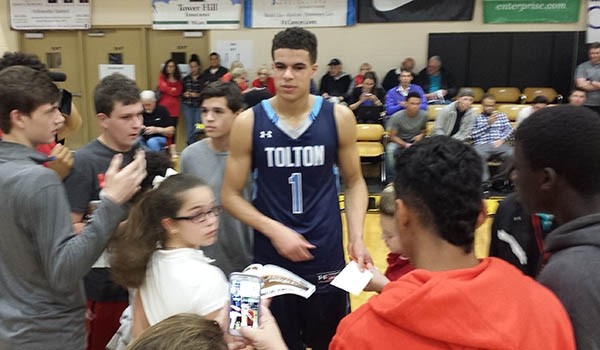 FORT MYERS, FL – Day One of action from the 2015 City of Palms Classic is in the books and there was plenty to talk about. Here’s the three biggest takeaways from the action.

One of the greatest measures of success at the City of Palms Classic is the amount of people that flood the court and the narrow hallways, looking for the previous game’s top stars. Using this metric, no one had a bigger buzz than the Ball brothers of Chino Hills High School from California.

Paired against Thomas Jefferson in a terrific first round battle, the two teams from different sides of America entertained in the nightcap. Back and forth. Up and down. It was breakneck basketball at it’s finest.

The lead changed 10 times. The scored was tied 14 times. Neither team lead more than eight points throughout the match-up. The pace was faster than the cars on nearby Highway 41.

In a game with a combined 181 points, it came down to back-to-back defensive plays from UCLA bound point guard Lonzo Ball that proved to be the difference maker. Thomas Jefferson guard Malachi Faison bounced the in-bounds baseline pass off a defender’s rear end and tried to score the game winner. Lonzo Ball came over and blocked the shot. Faison rebounded and threw up a second shot, only to have it blocked by Ball again.

We saw the full arsenal from the eldest Ball brother. Lonzo Ball played like the likely McDonald’s All-American that he is. We saw the majority of the weapons deep into the fourth quarter.

Ball made a 70-foot touchdown pass with his left hand late in the fourth quarter. It was a thing of beauty. His ball-handling and ability to create with either hand was flawless. Defensively, Ball was quick off his feet, moved well in unison with his opposing player and scored efficiently and patiently.

For Thomas Jefferson, future St. John’s guard Shamorie Ponds was brilliant in defeat, scoring 40 points on 14 of 25 shooting. He was dazzling.

2. Kevin Knox and Michael Porter could be playing for the same scholarships.

The two played very similar games – above the rim on both sides of the ball. Both are ranked in our top 10 for the class of 2017. Both will be recruited by the best of the best. The one common offer between the two? Duke.

3. The gap between the power conference teams and the rest of the college basketball pack is always closing. If there was a theme to the first round of the games at the City of Palms it is this – the non-majors have locked up some impressive players in this high school season class. A number of players that have signed with non BCS conference teams showed their worth on a rainy Friday in Southwest Florida.

Al-Wajid Aminu of Marietta (GA) Wheeler was the energy and production needed for an opening round win for the defending tournament champions. Aminu got a lot done against Wesleyan Christian with effort and determination. The future North Florid forward has the tools to step right into the role that Chris Davenport currently plays for the Osprey.

Southeast Louisiana scored a good one in Brandon Gonzalez of Charlotte (FL). We saw his production value all spring and summer long when he was one of the key players for the talented Team Speights. The 6-foot-5 wing can get buckets and did so on Friday night.