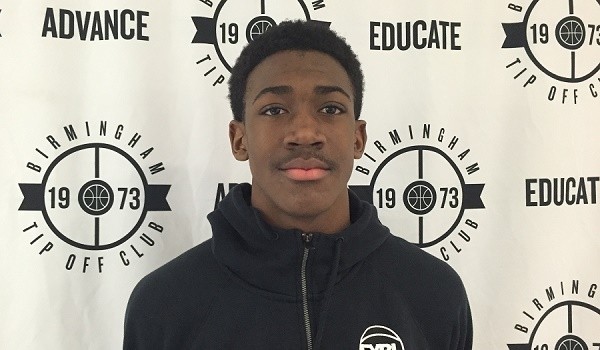 The second day of the Steel City Invitational brought plenty of exciting games to the table. With four teams looking to earn their spot in Tuesday night’s championship game, Monday’s semi-finals matchups were intense.

Here are the storylines and standouts from Monday’s action…

Last February, J.O. Johnson defeated Ramsay in the 5A state championship game to give the Jaguars a state title. The two 5A state powerhouses met once again Monday in another classic tilt.

Ramsay soared out to a commanding 22-9 lead at the end of the first quarter behind solid play from their backcourt, senior Brandon Wright and junior Justin Wiley. However, in this game, J.O. Johnson wing John Petty rose to the occasion and showcased his elite talent, as he put together one of the most complete games I have ever seen from him.

Petty, a 6-foot-6 scorer, caught fire at the conclusion of the first half. The junior hit back-to-back 3’s in rhythm off the dribble to tie the game at 34 heading to the locker room. Then, in the third quarter, he scored 14 points of his own, including a couple of 3’s and some three-point plays at the rim. He put his entire offensive arsenal on display, whether it was his shooting from the perimeter, gliding to the rim, or knocking down mid-range shots.

Behind Petty’s impressive performance, J.O. Johnson claimed a 7-point lead of their own to begin the fourth quarter. Behind some tough defense and timely shooting from Wright and Wiley, the Rams tied the game. Eventually, the game would move to overtime and Johnson would prevail in the state championship rematch, as they won 83-78.

Despite the disappointing loss for Ramsay, their senior-led squad proved one thing: they are amongst the state’s best teams this season, regardless of classification. Johnson is too, of course, and if I had to make the call today, I would say both teams will meet each other again in the state finals come February.

Monday’s matchup at the Steel City Invitational was a good one, and I sure hope we see it again this season. It will go down as one of the best games I’ve seen this season.

When Homewood takes the floor for any game, it’s hard to miss 2018 power forward Trey Jemison. The 6-foot-8 big man is by far the biggest player on his team, and at the end of their semi-final game against Sacred Heart Monday evening, he made the most of that height.

Homewood held a consistent lead throughout the game, but the Cardinals made their run in the fourth quarter. Sacred Heart’s talented backcourt duo of DJ Heath and Kevion Nolan heated up and chipped away at Homewood’s lead. With under two minutes to go, Sacred Heart made their biggest push as they trailed by 5.

Behind his length and defense, the talented sophomore protected the rim and sealed a big win for the Homewood Patriots. While he is still young, Jemison has quite the future ahead of him. He has a great frame and showed he was capable of making some moves around the rim. His defense is noted, and he plays with the ball strong above his chest. It’s easy to see why UAB and Samford have extended early offers, and they definitely won’t be the last for the talented prospect. Jemison finished with 15 points and 9 rebounds.

With his defense and blocking spree, Jemison propelled the Patriots into Tuesday night’s championship game against J.O. Johnson at 8:00 P.M.

MOUNTAIN BROOK GETS BACK ON TRACK

Frankly put, Mountain Brook didn’t have their best showing against Sacred Heart Saturday evening. So, when the next opportunity came, the Spartans rebounded, to say the least.

Bucky McMillan’s squad put together an outstanding defensive game-plan against the state’s top player, Josh Langford, and Madison Academy. Mountain Brook was everywhere on the floor and made things difficult for Langford and the Mustangs. Ultimately, Langford finished with 23 points in the loss.

Mountain Brook’s star freshman, Trendon Watford, finished the game with 33 points and 12 rebounds. He did a magnificent job of showing his offensive skill-set, scoring from 15-feet and in and excelling at the free-throw line. But the most impressive part of Watford’s stat-line? According to the official stats, he did all of his damage – 33 points and 12 rebounds – in 14 minutes. That’s not a typo, either – fourteen minutes. Talk about impressive and efficient. The talented 2019 prospect is both of those and continues to get better each time out.

A.J. Luke, 2016 PF, Ramsay: No one has done more to help themselves in the first two days of action than Luke, as well as his teammate, Brandon Wright. The 6-foot-5 power forward is terrific around the rim. He can score with his back to the basket with a wide array of moves, as well as face-up and make plays toward the basket. Luke does a great job of getting fouled and has a great shooting stroke from the charity stripe. Coming into the event, he held an offer from Montevallo. In three games, it’s safe to say his value has increased exponentially, as several Division II and NAIA schools are now showing interest.

Micah Fuller, 2016 CG, Bessemer City: There are shot-takers and then there are shot-makers. Fuller is definitely a shot-maker, and he may be one of the best the state of Alabama has to offer. The unsigned senior can fill it up from deep, and while he faced some tough defense on Monday, the quick guard manufactured ways to score. He did a nice job of attacking the rim and showing his crafty nature around the goal. Fuller also did a great job of enhancing his stock.