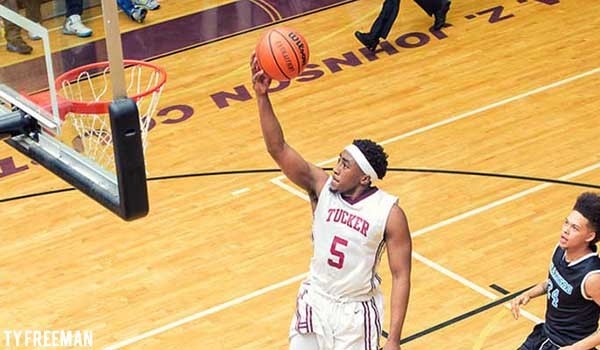 TUCKER, GA – The Chick-Fil-A Invitational has become a staple in the post-Christmas holiday basketball schedule for us at HoopSeen.com. Dekalb County does a terrific job of hosting this event every year and the competition never disappoints. We spent Tuesday in the gym and took in a number of terrific games. Here’s the lessons learned from Justin Young.

Miller Grove’s defense. Okay, okay. I didn’t learn anything new about it. Sharman White’s crew defends as well as anyone in America.

Alterique Gilbert is as good of an on-the-ball defender I’ve ever covered in a decade and a half of Georgia high school hoops. Aaron Augustin, Josh Jackmon and Colin Young just came in waves all night long. If the guards slipped into the paint, Raylon Richardson was the safety net as a shot-blocker and rebounder.

Eskridge answers the call. In a back and forth game against North Clayton, Tucker saw it’s three quarter lead fall apart in the closing minutes of regulation. And, at times, it looked like NCHS was going to end the day as the victors.

Down three with 10 seconds left to play, Kenton Eskridge answered the call. The junior drilled a corner three and tied the game. In the two overtimes he put on his leadership hat and commanded his team to the victory to advance to the championship game.

Eskridge’s three-pointer had some déjà vu to it.

“Last year against Miller Grove, I sank the same shot in overtime (in the same tournament),” Eskridge said.

Mr. Clutch and his Tucker teammates will play Miller Grove in the championship game tonight.

Hello, Ahsan Asadullah. The North Clayton big man had a monster performance in a tough double overtime loss to Tucker. The 6-foot-8 junior put on a show in the low blocks. He finished with 20 points, 16 rebounds, 7 assists, 3 blocks and a steal. Asadullah has made significant improvements over the last year and is primed for a big season in region play. Truth be told, he may be the second best passing big man in the state behind Wendell Carter. That’s high company. Asadullah’s value is reminiscent of current Georgia Southern big man Montae Glenn. One more note on the big fella: he’s an elite student.

Meridan has a stable of prospects. The Mississippi squad was impressive in a 65-38 win over Cedar Grove.

Point guard Miles Miller played with smarts and speed. He passed it well and scored from the wing and at the rim. The Brewer brothers – Ledarius and Tyron – both had their moments. Ledarius led the way with 16 points in the paint while Tyron is a live wire and versatile wing forward. Unsigned big man Don'taidrae Scott grabbed everything off the rim and finished with 11 rebounds off the big bench.

Miller and the Brewers should be on mid-major watch lists going into the spring. Scott is an intriguing big man project for non Division I schools.