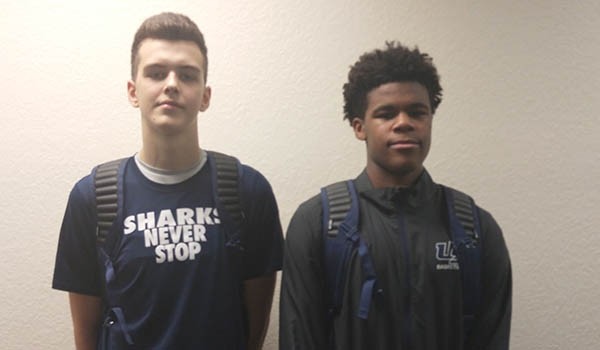 The Kreul Classic kicked off on Friday afternoon within the gym at Coral Springs City Gymnasium bringing together some of the top high school programs throughout the Sunshine State along with a few others from the northeast corridor. There were a few surprises and some others performances that were expected but none more than the duo out of the University School.

VERNON CAREY, PF, UNIVERSITY SCHOOL, 2019: To stand the size of Carey and to move the way that the lefty can at his age is just crazy! The freshman big man is a smooth southpaw who can put the ball on the floor a little but is really good out of the high post. He can hit the mid-range jumper off the catch, is an efficient passer of the ball facing the rim, and is very explosive in the lane as he converted on a few dunks regardless of if there was someone between him and the basket. At 6-foot-8, it is easy to understand how a program like Baylor has already offered the University School star. An excellent two-handed rebounder of the ball within traffic who is great out in the open floor, mark Carey down as an easy top-25 guy within his class nationally where he has the chance to be as good as he might want to be moving forward.

BALSA KOPRIVICA, C, UNIVERSITY SCHOOL, 2019: Koprivica and Carey create a tandem that is going to be a daunting task for most opponents to stop. You sometimes see older elite talent playing together at some of the top prep programs but at such a young age and at a local school in Florida? Good luck! Also holding an offer from Baylor along with those from Murray State and Georgia State, the Serbian born center has gotten lighter in traversing throughout the floor and because of it, his production whenever the game picks up has also increased. The 7-footer threw down a few two-handed dunks over opposing big men on his win Friday while he showed the uncanny abilities to score over either shoulder in the lane. A high volume rebounder of the ball who can play facing the basket and with his back to it, Koprivica joins Carey as an elite option early on in the 2019 class with just as good of upside ahead.

ANTHONY POLITE, G, ST. ANDREW’S SCHOOL, 2017: Born in Switzerland and having come over to the United States two years ago, what Polite did on Friday was quite impressive. The 6-foot-4 lefty is one of the better distributors that you’re going to find around. With a sculpted physique and a great control of his speeds on the blow-by, Polite takes the bump well en route to the basket and makes others better on drive and kick out passes. While he didn’t shoot it as well as he might have liked, Polite did score the ball at the basket on crafty finishes but also defended the living hell out of the basketball on the defensive end. He is a two-way producer on the hardwood with a fine feel for the game and after being seen by Florida State head coach Leonard Hamilton, the Seminoles decided it was worth it in offering the import to the state.

LOU KING, SF, POPE JOHN XXIII, 2018: Taking his talents to south Florida for the weekend along with his Jersey squad, while they failed to escape with the win, King was a quality producer off the bench for his group. He continues to grow some standing nearly 6-foot-7 and with great length and fluid movements, King gets up and down the floor with ease. The sophomore forward uses his long stride in getting the angle on his man off the first step and is capable of scoring at the basket with athleticism. He didn’t shoot the ball all that great but what he did show was his ability and willingness to create for others off of his first few dribbles on the attack. A skilled passer of the ball, King threw excellent dishes near the basket creating for tons of problems whenever the ball was in his hands. A very versatile defensive piece on the other end of the floor that can guard the 2-4, King showed why he holds such a cupboard full of scholarship offers at this time as he looks to be a top-50 guy within his 2018 class.

DARIUS ALLEN, SG/SF, CHAMINADE-MADONNA COLLEGE PREP, 2016: Making his way to Chaminade for his final year of play, Allen might just be the most explosive athlete within the high school ranks nationally. The things that he can do in the open floor have your mouth drop at times as on several of his open floor dunks on Friday, you could have spotted his forehead above the rim. He is more than just an athlete though as the 6-foot-5 wing has really developed his set of handles on the breakdown and is a high volume rebounder of the ball off of the perimeter. His jumper seemed to be coming up a bit short in his team’s close win but he created well for others off the bounce, scored at the basket, and defended on the other end, making him one of the best available seniors on the east coast.

MICHAEL AKUCHIE, SF, ST. THOMAS AQUINAS, 2017: There was literally nothing known of Akuchie until we spotted him on Friday evening in the opposing court. The 6-foot-7, well-sized forward is more perimeter based and he has the fluid movements and ball skills to be a well-rounded 3-man at the next level. He can create for himself off the bounce and can use the high ball screen appropriately out atop of the key. His shot wasn’t finding the mark but he did rebound the ball on the defensive end and even distributed some as a jumbo facilitator type within the half-court setting. Sporting high level grades in the classroom and even higher level upside out of either forward spot at the next level, while there hasn’t been any offers received just yet, expect for Akuchie’s name to blow up this summer as he develops his quickness and better decision-making with the ball in his hands.

Darius Allen recently picked up an offer from FIU joining Florida Atlantic in pursuit of the Chaminade star; Murray State and Minnesota are also keeping tabs on him.

With no offers in hand just yet, Michael Akuchie has recently made visits to Cornell, Stanford, Bowling Green, and USF; the majority of the Ivy League schools have been in touch with him lately.

After receiving an offer from Florida State on Friday evening, the Seminoles joined the likes of Alabama, Boston College (visited last month), Rutgers, Yale, Princeton, Virginia Tech, FAU, FIU, and Utah in dishing out a scholarship offer to Anthony Polite; he is expected to be seen by Marquette and Gonzaga on Saturday.