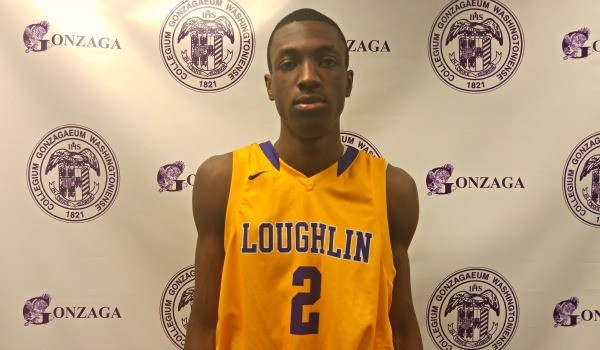 The first day of our three-day run throughout the Washington DC area brought us to the Gonzaga DC Classic, an eight-team event run at Gonzaga College High School, located in the heart of the capital city. With a few top-100 commits lacing up their shoes and a few others that are attempting to solidify their status within their own right, it was Keith Williams, a 6-foot-5 wing out of the New York City region that shined the brightest.

KEITH WILLIAMS, SG/SF, BISHOP LOUGHLIN HIGH SCHOOL, 2017: You love to see guys that develop and put time in following the long and arduous summer months. Keith Williams is one of those guys. After getting my last glance at him on the second to last day out in Las Vegas back in July, the progressions that the New Yorker has made is quite impressive. He was the catalyst for his group securing a lopsided win on Friday evening as hit two 3-point jumpers, showed further quickness on the first step and attack to the basket where he exploded to the rim for highlight jams, and even facilitated and distributed within the half-court setting. Add it all up and Williams looks to be a cusp, top-100 recruit in 2017, someone that dwarfs his minimal five scholarship offers at this time.

NAZEER BOSTICK, SF, ROMAN CATHOLIC HIGH SCHOOL, 2016: Playing alongside two of his future Penn State teammates with Tone Carr and Lamar Stevens at Roman Catholic, Nazeer Bostick sometimes doesn’t get the pub that he rightfully deserves. We are here to change that. The 6-foot-4 wing has always been an explosive athlete at the basket but what he hasn’t been is a dependable secondary ball handler who can pass the ball on the go and also score it from the mid-range regions on out, all things he showed on Friday. After putting up a very efficient 25 points on the scoreboard, the tide is turning in favor for the tough wing as instant contributor next year in Happy Valley. A willing defender who is at his best in the open floor, the Philly wing should be an energy giver early on but could morph into a quality, productive asset as a complimentary scoring piece in the coming years.

CHRIS LYKES, PG, GONZAGA COLLEGE HIGH SCHOOL, 2O17: I dare you to find a more entertaining ballplayer at the lead guard spot within the 2017 class. Go ahead, try it! Chris Lykes always brings the fire and grit to the hardwood and absolutely flourishes in speeding the game up. He has impeccable elevation on his 15-feet and out jumpers, of which he can rise up at any time and convert over the taller defender. His size may hurt him as he stands at 5-foot-7 on a good day, yet he more than makes up for it by way of his on-ball defense, passing skills within the early offense, and unbelievable speed and quickness with the basketball in his hands.

SIDNEY WILSON, F, ST. RAYMOND’S, 2017: One of the more tantalizing prospects throughout the east coast, Wilson sure doesn’t lack for talent. The 6-foot-7 forward is more of a face-up, perimeter based guy who has deceptive ball skills from off the bounce. He is a high volume defensive rebounder as he tends to enjoy taking the ball off the glass and leading the break, where he then can make the appropriate decision within the open floor. The New Yorker doesn’t have a ton of strength but the upside out of him is off the charts. By adding more consistency to his production as his numbers can taper off as the game goes on, the recruitment of the high-upside St. Raymond’s junior should skyrocket due to the length, ball skills, and quickness out of the junior forward.

CAM NORMAN, PG, GOOD COUNSEL HIGH SCHOOL, 2017: The little guy can go. While Norman stands just around 5-foot-10, the Maryland native has quite the feel for the game. He tends to make all of the proper decisions with the basketball in his hands and is great at slowing things down or speeding the game up, displaying the ability to have a pulse on any given possession. With a sturdy set of handles and very difficult to stay in front of on the attack to the basket, Norman is capable of scoring through the trees at the basket but also in getting past the first line defender before hitting an open teammate out on the perimeter with an accurate pass. A very valuable commodity anymore is a point guard who takes care of the ball, can defend, and can make his teammates better; Cam Norman is all of that and some more.

MARKQUIS NOWELL, PG, BISHOP LOUGHLIN HIGH SCJOOL, 2018: Again, here we go again with the smaller point guard. However, it is hard to not give our dues to Markquis Nowell. The 5-foot-8 point guard out of the New York City area is one, tough bugger with the basketball as he is relentless anytime he has it within his possession. Since he plays lower to the floor and has already a pretty sturdy, strong physical mold, Nowell is tough to deter from getting where he wants as he can score on pull-up jumpers out to the three-point line, distribute off the high ball screen, and also get to the rack and cause some damage, though he must finish better within the taller trees in the lane. A major nuisance for the opposing group as an on-ball defender, Nowell came up with a handful of deflections and steals and while his standing stature may hurt his ceiling, it doesn’t take away from just how productive he really is in controlling things at the point guard position.

The standout of the day, Keith Williams lists offers from Hofstra, Bowling Green, Saint Peter’s, Dayton, and VCU, while the Flyers and Minnesota are the most recent schools that have come in to see him.

Williams’ teammate, Markquis Nowell, lists three programs on him at the moment, which includes Western Kentucky, which he stated as an offer, along with Morehead State and LSU.

Eddie Scott, a 6-foot-5 junior wing at Gonzaga, had a productive day off the bench as he lists hard, priority attention and an offer from Princeton, to go along with others offers coming from Rice, James Madison, Hofstra, George Mason, and Longwood.

One of the better big man on the east coast still available in the 2016 class, Paul Newman, a 6-foot-8 center at Roman Catholic, is primarily being recruited by Brown, of which head man Mike Martin was in attendance for him on Friday evening.

WHO’S IN THE CROWD?