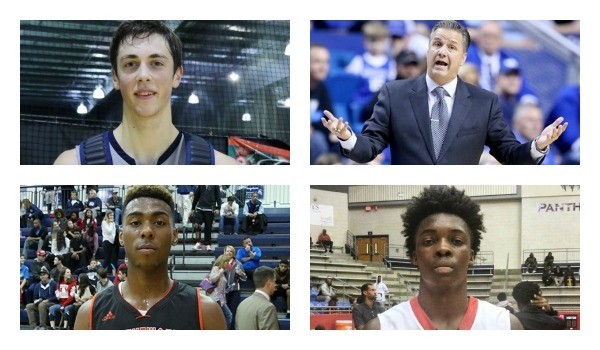 Man, what a month it was. What were the five things that stood out from the rest of the fray? We indulge on further.

De’Aaron Fox, Malik Monk, Lonzo Ball, Dennis Smith, Markelle Fultz, and Frank Jackson, the list could go on and on. The talent sure isn’t lacking in the backcourt within the 2016 ranks but what Andrew Jones displayed at the Thanksgiving Hoopsfest last weekend in Dallas, was nothing short of remarkable.

Granted, I must keep things in perspective but I was lucky enough to get the opportunity to see Jones before most others dating back to the summer of 2014. At the time, the Texas native was just barely over 6-foot and was more of a facilitator and hard-nosed defender. Now, the senior guard stands over 6-foot-4 and is capable of still running things in the backcourt, but also scoring the ball efficiently from each level, finishing with athleticism at the basket, and defending with a vengeance. The MacArthur guard has remained steadfast with his physical and ball skill development and in each of my viewings over the past year and a half, Jones has surpassed each of my expectations for him. Could what I am saying be nullified entirely and not live up the heightened hopes? Sure. But with what I have seen with Jones and how he brings a worker’s approach, a table full of intangibles, and versatility in the backcourt, we could be looking at one of the next best jumbo lead guards at the next level come five years from now.

There has been a lot of debate about how John Calipari recruits and the way that he runs things at Lexington. There are some that believe it is not healthy for the game but regardless of which side you are on, it is hard to deny the reach and lure that the head man at UK has on each recruiting class.

Heading into the early signing period earlier this month, Kentucky sat at the third spot within our rankings. Wow, imagine that! A top-three class would suffice for most, but the fact that the Wildcats have never finished outside of the top two of most class rankings since taking over at the SEC blueblood speaks volumes. Now entering December, Big Blue Nation should be excited once again as the 2016 class looks to be one of the best, if not the very best, collective group of prospects that will suit up on the floor at Rupp Arena next college basketball season. A five-man class including Wenyen Gabriel, Sacha Killeya-Jones, De’Aaron Fox, Malik Monk, and Bam Adebayo is as good as it gets. Many have talked about the resurgence at Duke and how Coach K has outdone Calipari on the recruiting front, but as far as I can see, things still begin and end with Kentucky when it comes to locking up elite, blue-chip recruits in any given year.

The high school basketball season is just beginning but luckily, I have been able to get out and already get a glimpse at some of the top prospects nationally. The early signing period brought a few surprises but if you would have told me back in April that Mississippi State would be sitting at the fourth overall spot within the HoopSeen class rankings, I would have told you that you were crazy.

Here we are now and while MSU hasn’t started out the season as good as it would have liked during Ben Howland’s inaugural campaign in Starkville, the future looks mighty bright. While I haven’t been able to see Lamar Peters, Abdul Ado, or Tyson Carter this month, I was able to get a look at Schnider Herard, Mario Kegler, and Eli Wright. Together, the six-man class brings a quality amount of ball skills, talent, versatility, and toughness. What has stood out even further is the fact that its least heralded recruit in the 2016 class, Eli Wright, might be the most productive and effective ballplayer during his stay at the SEC program. Consistent effort and jump shooting has been an issue for the Kentucky native in the past but it seems that the 6-foot-4 playmaker has turned the corner and hence, is more than capable of sliding in at either guard spot next year, which may be needed if freshman star guard Malik Newman heads to the NBA after his lone year at Mississippi State.

Just like at Mississippi State, the class headed to Virginia next fall is quite impressive. Hands down the most talented and lauded group of prospects during Tony Bennett’s tenure in Charlottesville, it seems like sustainability for the ACC program won’t be much of an issue as long as the former Wisconsin-Green Bay standout remains at the helm. With a top-10 class already in hand, Ty Jerome, Kyle Guy, and DeAndre Hunter should provide an immediate but also long-term production to the floor at John Paul Jones Arena. The one guy not mentioned here but who might have the greatest upside out of them all is none other than Jay Huff, a 6-foot-10 center out of Voyager Academy.

Where the four-man class is full of toughness and intangibles, Huff has continued to rework his body and develop more of a versatile scoring game within the half-court setting. Many have been unable to catch sight of the North Carolina native as he played for a lesser known travel program and at a smaller high school. That still doesn’t take away from what he does and what he can be. He may be one of the top-ten shooters nationally and that is coming from a guy that stands over 6-foot-10. While he vastly needs to improve his strength in order to handle contact at the next level, the fact that Huff has remained open to redshirting next year at UVA speaks volumes about the kid’s willingness to buy into the long-term picture of things. Although Huff is the least heralded and lowest rated prospect within the 2016 class headed to Virginia, the deceptively tough and intellectual big man may not just be the most talented of the bunch, but also have the opportunity to play his way into the professional ranks down the road.

While I have only been able to get the chance to cover the recruiting world for over five years now, this is hands down, the best class that I have seen, when speaking on depth from one to fifty, to the elite talent atop of the charts.

The 2015 class brought us a few elite prospects along the lines of Skal Labissiere, Jaylen Brown, and Ben Simmons, but place any of those three into the 2016 class, and quite honestly, I am not too sure that they would crack the top three. That is no disrespect to any of the current freshmen stars but more geared towards just how special the top of this year’s group is. Guys like Harry Giles, Josh Jackson, and De’Aaron Fox are one every 20 years types of talents. What is even more impressive is just how talented the rest of the class is as you continue to descend down the rankings. The fact that a guy like Alterique Gilbert might not have a chance to compete in the McDonald’s All-American Game, is staggering. In any other year, the Peach State native might be one of the best, if not the very best, point guard prospect in a class. However, with the special crop of seniors, Gilbert may be sweating it out for the burger game. Regardless, this class is top of the line stuff and the shockwaves will continue to be felt ten years from now as some of those within it make major strides within the professional ranks.