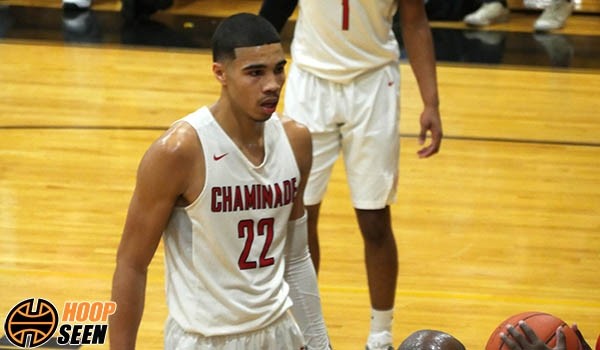 FORT MYERS, FL – The City of Palms is the premiere high school basketball tournament in the country. The stars play like stars here in Southwest Florida. Here’s part two of our COP Standouts.

Jayson Tatum, SF, Chaminade (MO), 2016: The future Duke player showed off all of the tools – every single one of them. During his first game, Tatum unleashed a barrage of three-pointers from the top left spot of the arc. Bang, bang, bang. Tatum finished with five made triples and 36 total points in his first game at the City of Palms. The next game, the future McDonald’s All-American was a Swiss Army Knife. He was a do-everything force. Tatum finished with 33 points, nine rebounds and four assists against Wheeler. Imagining him alongside Harry Giles, one of the toughest players to defend in the class of 2016 and potentially even in all of college basketball next year, is a scary proposition. Duke has one of the best recruiting classes over the last 15 years. Good enough to win a national championship? After seeing Tatum and projecting him with the rest of the class, the answer is an emphatic “absolutely”.

Lonzo Ball, PG, Chino Hills (CA), 2016: If you’ve read anything I’ve ever written over the last decade I’ve covered hoops, I’m very high on uniqueness. Ball is right there with some of the most unique players I’ve ever covered. He plays in the most unique style of play that I’ve seen at the high school level. He’s one of the most unique passers I’ve seen at any level. Ball threw 70 foot lasers with the perfect velocity and precision. He plays with speed, freedom and creativity. My colleague Jerry Meyer called him the “conductor of a beautiful orchestra”. I like that description. The music that plays is different and it makes you stop and listen. Ball put on a show and recorded a massive win for his Chino Hills team over No. 1 Montverde.

Tony Bradley, C, Bartow (FL), 2016: The future North Carolina big man was one of the most consistent and polished big men in the field. Every game out he did what you want your bigs to do – score in the post, rebound against size and pose a threat on both sides of the ball. Bradley projects well under the tutelage of Roy Williams. The 6-foot-10 big man gets better at the areas he can grow and translate success immediately on the court. There’s so much value in that sort of development. North Carolina fans will be happy with the type of player they’re getting in the Floridian.

Kevin Knox, F, Tampa Catholic (FL), 2017: On the opening night of the City of Palms, Knox put on a show. The 6-foot-8 athlete set the bar high for the studs of the event. Knox scored 27 points on constant attacks to the rim and was the beneficiary of his team's end to end defense. Knox was on the glass and grabbed a dozen rebounds, too. Already at our No. 10 overall spot, we’re considering him for an even high bump in the rankings in the top-heavy 2017 class. Knox is quickly approaching head coach only status as a recruit.

Shamorie Ponds, PG, Thomas Jefferson (NY), 2016: Every great player from New York City has a nickname. Facts are facts. Ponds has been dubbed “Slick” and that’s just how he played in the humid December air in Fort Myers. Ponds slipped through defenses, scored in the paint, shot the rock well, ran with the Chino Hills horses and made it a game in opening round. Ponds, a future St. John’s point guard, ran the rock around the court and helped his guard-heavy team take care of business in big match-ups. All and all, Ponds justified his spot in our top 50 and should have a fine college career in his hometown.