City of Palms: The legend of Lonzo Ball grows 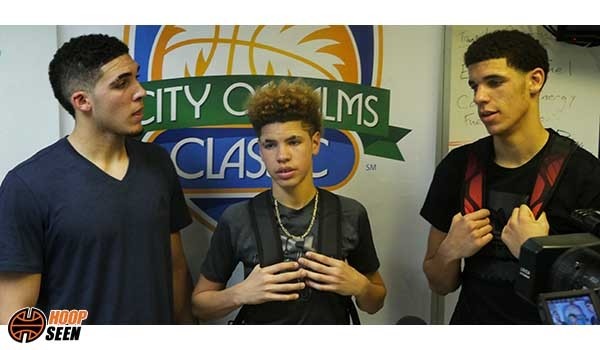 FORT MYERS, FL – Lonzo Ball is the most unique point guard on the most unique high school team in the country. He’s a set-shooter. His jumper comes from his off shoulder, across his face and he’ll pull from five to 10 feet from behind the foul line. From a traditional standpoint, it doesn’t really make a lot of sense.

But wins do. And you can’t argue with results. Chino Hills is now in the semifinals of the best high school tournament in America. They beat Montverde Academy, the No. 1 team in America with their frantic, shoot-from-wherever-you’d-like style of play 83-82.

Ball was the do-everything catalyst in the win. He was sensational in his own unique way. Stars deliver here. Over the 39 years of this tournament, there have been 99 players drafted in the NBA. There have been 126 McDonald’s All-Americans. There are 51 players currently in the league that have played at the City of Palms.

Elite players shine here. Ball was in line with that lineage on Monday night against Montverde.

“He made unbelievable shots. You could not double him because he’s going to make the right pass. I feel like I have the best player in the nation and I think he proved that tonight. I think there’s no question about it,” Chino Hills head coach Steve Biak said.

“It’s just so special that we get to coach a throwback type of kid. He’s so unselfish. All he wants to do is win. He could score 40 every night if he wanted to. He’s more driven by winning.”

The Ball Brothers and the Chino Hills offense has a flavor that resembles Oregon football at the peak of the Chip Kelly era – fast, hard to guard and unconventional.

“It’s almost disrespectful,” said one player from a team in the field that was watching the night game.

That sentiment was echoed about by the hoop heads that packed shoulder-to-shoulder in a camped Bishop Verot gym. It is a topic worth debating. Right or wrong – who knows, and truthfully, who cares – Chino Hills won.

The win wasn’t easy. It came down to the final seconds of a wild, back-and-forth game. Truthfully, it was one of the best games I’ve ever covered. It was exciting. Stars were trading punches. A capacity crowd was entertained and action was as present as Mad Max Fury Road. Every minute there was fireworks.

“The way we play forces you to make that transition,” Lonzo Ball said. “We’re a team that pressures the whole game and runs no plays, there’s not much you can really do. If we get into run battles, we feel like we’re going to win.”

Lonzo Ball, the eldest of the UCLA bound trio of brothers, finished with 29 points, six rebounds, eight assists, five steals and one blocks. LiAngelo Ball had a team-high 32 points, including the go-ahead three-pointer. Lamelo Ball, the youngest, tallied 16 points in the win. Collectively, the brothers Ball scored 77 of Chino Hills’ 82 points. That’s 93.9 percent of the offense.

Chino Hills, the No. 2 team in the nation according to USA Today at the time of the game, could be No. 1 in the next round of national rankings. A championship at the City of Palms would certainly cement that thought.

Few teams and even fewer national pundits have see the Huskies in action on the East Coast. This trip is the furthest Chino Hills and the Ball Brothers have ever traveled for a national event. Respect was certainly earned. The play certainly started conversations.

“We finally got out here on the East Coast and showed people what we can do,” Lonzo Ball said.  “We’re number one, we’re number two, it really doesn’t matter. Deep down inside we know we’re the best team.”

They certainly were on Monday night. Conversation over.