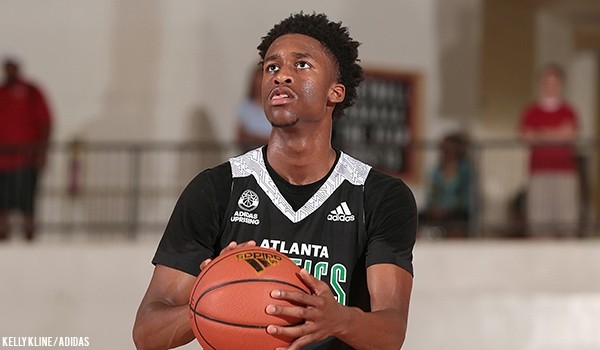 MARIETTA, GA – On a day where the big men match-ups were all of the buzz, the guard play shined through at the adidas Xplosion. We recap the Greenforest Christian/Pace Academy, St. Francis/Pebblebrook and Wheeler/Walton games.

The hype was all about Wendell Carter going against Ikey Obiagu going into the adidas Xplosion. You understood why. Two five-star big men going head-to-head? Yeah, people were talking. They had to talk. These types of games just don’t happen every day. Or year. Or even decade. This was a historical match-up. Hype was justified.

But the match-up never really materialized. And the reason why is probably the day’s biggest takeaway – Greenforest Christian is a major team and nearly impossible to break down on either side of the ball. Yes, the size matters. It has to matter when you roll out a lineup of a seven-footer, a couple of 6-foot-8 forwards in the starting five.

The Greenforest guards have been the story during the early part of the season for the Christian private school. New Hampshire bound guard John Ogwuche got hot from three to open the game. Then point guard Justin Forrest got rolling on the wing. The team’s guard play steadied the ship and set the pace for a methodical game.

There were some wow moments. Obiagu had a pair of gorgeous jump hooks over Carter. In the first half, Carter showed off his unique face-up game out to the three-point line. Obiagu had several of his signature blocked shots. Carter ripped down some amazing rebounds.

The match-up had it’s moments, no doubt, but the game wasn’t going to be about the giants. And that was exactly how Greenforest wanted it. Balance on both ends and neaturalizing one of the elite amateur basketball players in the world was the game plan. That won. And that win, coupled with the strong early season resume speaks volumes to just how good this team is.

We’ll discuss that train of thought more on the site later in the week.

In a game that averaged a six points for every minute played, the winner of the St. Francis-Pebblebrook tilt would have to

Jared Harper dribbled into the right corner of the free throw line, missed the shot and St. Francis ripped the rebound and pitched it forward to Kobi Simmons for the open floor dunk and walk-off score.

Kobi Simmons with the game winning walk off dunk for St Francis 96-94 win over Pebblebrook.

It was a track meet of epic proportions.  It was also as exciting of a game we’ve seen in the Peach State this young season.

Simmons finished with 33 points (five three-pointers), six rebounds and five assists. Harper scored 35 points and dropped nine assists and hit seven three-pointers in the game. Sexton finished everything around the rim and had a game-high 39 points.

This was an offensive slugfest and there wasn’t a spectator in the building that was disappointed in that. The guards delivered in a big way and entertained along the way.

Lost in the shuffle was the play of key members of both teams. Chance Anderson, a 6-foot-6 senior, scored 20 points and grabbed nine rebounds in the win before fouling out for St. Francis. JJ Smith, a move-in from North Carolina, was a highlight reel in action for Pebblebrook.

Every guard delivered in this game and it was as fun of a contest we will probably see this high school season.

The Wheeler-Walton tilt is one of Georgia’s best rivalry games in the state. The hoopheads of East Cobb pile Douglas Lipscomb Gymnasium and roll deep for the county clash. It took all of two seconds to see where this game was headed.

Al-Wajid Aminu took a pass from Makahi Eastmond off the opening tip and thundered it home with the dunk. The Wildcats never looked back. Wheeler went on to win 74-50.

Walton is young, with four players that were playing middle school basketball last year on the floor in big stretches at the varsity level. The Raiders knew they were physically overmatched.

Darius Perry drilled three first quarter three-pointers. Romello White owned the glass and blocked shots. Eastmond did a fine job of running the team and sewing the pieces together.

The takeaway here is this – The Wildcats are just as good as they were last year and in some regards may be a more balanced team then the group that won the AAAAAA state title.