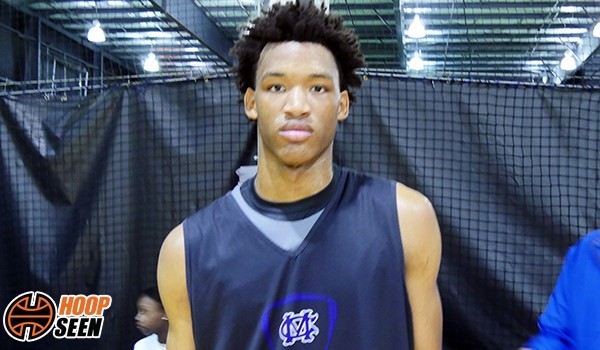 GREENSBORO, N.C. — We tipped off our high school season coverage this weekend at the Phenom Hoops Jamboree. The event featured 30 teams from North Carolina and Virginia. Here’s our Super Six from the day’s action.

JAY HUFF, C, VOYAGER ACADEMY, 2016: Huff may be the most under-appreciated senior recruit throughout America…and he is a part of a top-10 recruiting class! The Voyager Academy big man has a super unique skillset where the 7-footer can drill long distance jumpers without much of an issue and whether it is off of the standstill or on pick-and-pop look, consistency is always on point. A weight room away from being perceived as an elite recruit, Huff cemented himself as a legitimate threat as one of the toughest matchup issues throughout the land and upon taking a redshirt year next winter at the University of Virginia, the 2016 big man is going to be one, fine asset for the Wahoos thereafter.

JAYLEN MCMANUS, F, NORTH MECKLENBURG HIGH SCHOOL, 2016: Wow, that’s all you could really say after what the 6-foot-7 forward did on Saturday down in Greensboro. With a packed house of mid and high-major coaches in attendance, it wouldn’t be all that surprising to see the uncommitted senior have his name heat up as the winter months settle upon the country. Very skilled from 17-feet and in with a motor and toughness to him that has drastically improved these past few years, there really isn’t much that McManus didn’t do on Saturday. While he will be nagged by the ‘tweener’ label, what McManus does is produce in the frontcourt which should make one college program a happy group whenever the Carolina native decides to commit.

JAIRUS HAMILTON, SF, CANNON SCHOOL, 2018: When you think about the prototypical small forward in the Big 12, usually tough and strong with playmaking tangibles come to mind; these exact traits are shown within Jairus Hamilton’s skillset. The sophomore wing acts as a point-forward at times and is relentless on hard attacks to the basket and on the weakside glass. While he needs to gain further consistency with his outside jumper, the elevation on it is no joke and neither is the Charlotte native’s upside on the hardwood. Leaving with a brand new offer from Virginia Tech, Hamilton can be seen as a top-75 recruit and someone who has his best ball ahead of him.

WENDELL MOORE, SG/SF, COX MILL HIGH SCHOOL, 2019 (pictured above): The maturity that Wendell Moore shows on and off the floor is staggering. Though just a freshman and 14 years old at this time, the Cox Mill product is quite the entertaining and impressive watch. He rarely ever is left out of a play on either end and can fill up the stat sheet in various ways. With dimensions of former Duke star Justice Winslow within his game, Moore can act as a point-forward in facilitating within the half-court, rebounding the ball in and out of his area, and defending the opposing unit’s best scoring asset. Add it all up and what you have is an elite recruit and a phenomenal kid that the best of programs will soon be prioritizing.

JP MOORMAN, F, GREENSBORO DAY SCHOOL, 2017: The progressions that JP Moorman has made within his game are off the charts where the Carolina native has really done a great job of toning his body which has enabled for consistent production. This time last year, Moorman had a minimal college recruitment. On Saturday, Moorman showed off the entire package and in an efficient manner as he left the event with an offer from Virginia Tech, that being his first high-major offer. An ideal small-ball 4-man who can play the 3-spot without an issue, Moorman never takes a play off and is someone that will begin to pop up more frequently on ACC recruiting boards from here on out.

MARCUS WATSON, SF, WEST FORSYTH HIGH SCHOOL, 2019: While he didn’t start off the event the way that he would have liked, Marcus Watson ended it on a good note. Sitting out the past few weeks with a hip injury, it was the first live competition that the Carolina native has seen in over a month but boy, does Watson have a bright future ahead of him! With ideal length, a developing physique, and a quality motor, it is all about touching on the freshman’s skillset and working on his decision-making before Watson can become a high-major recruit. He can play the 2-4 already at this time and can get on a roll with the pull-up jumper from deep and due to the concoction of his quality size for his spot on the floor, expect to hear much more about the 6-foot-6 forward out of West Forsyth moving ahead.