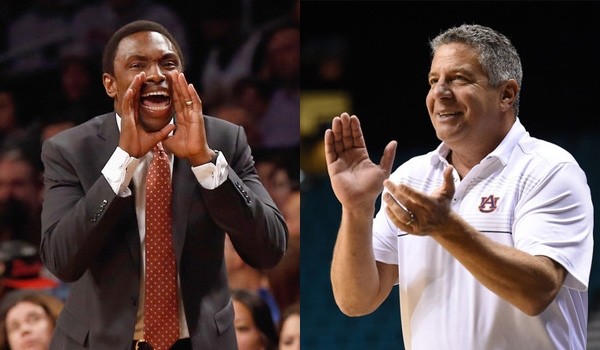 The weekend was a big one in the state of Alabama and it’s only August. No, we aren’t talking football here. Both Alabama and Auburn reeled in big-time national recruits for hoops.

On Sunday, Bruce Pearl and the basketball staff pulled in quite the coup as Mustapha Heron, a 6’5 wing out of Sacred Heart High School in Connecticut, decided to end things and make a commitment to the Tigers program during his visit. It being the biggest commitment to date for Bruce Pearl, we dive into what the commitment means, the implications that could follow suit for the Auburn program, and if some added heat might be felt a few hours away in Tuscaloosa.

On Monday, Terrance Ferguson popped for the University of Alabama. Avery Johnson has landed the biggest Bama basketball recruit since Gerald Wallace. You could argue Ferguson’s commitment is the biggest non in-state player since Antonio McDyess. The Prime Prep (TX) shooting guard was a key member on the U19 USA Basketball team that won a gold medal at the U19 FIBA World Championship.

Our Justin Young opens the panel up to Corey Evans, our managing editor, and Garrett Tucker, our Alabama resident and in-state expert with the Tigers and Tide.

With Monday’s news of Terrance Ferguson to Alabama and Mustapha Heron to Auburn from  Sunday, are we witnessing the next great recruiting rivalry in Alabama?

Corey Evans: I would definitely say so. Some questioned the hire of Avery Johnson whenever he was brought in from the TV booth after a brief hiatus from the NBA coaching scene but he quickly hired a great staff with a plethora of connections and roots across the nation. It isn’t by chance that Auburn landed their top recruit in years and just 24 hours later, Alabama followed a similar route. Auburn and Alabama basketball has been on the backburner for years compared to football. With an injection of top tier talent coming into the state, this is definitely a rivalry that might not ever touch what Bama-Auburn is on the gridiron, but it definitely raises the stakes as to who is the figurehead program within its borders.

Garrett Tucker: With these two commitments, it definitely looks like things are beginning to heat up on the basketball and recruiting side of things. From the coaches and players to friends and fans, this next-level recruiting is going to heat up the Auburn-Alabama rivalry - and that's a guarantee. Alabama's loaded 2017 class isn't going to hurt the cause, either. Both Avery Johnson and Bruce Pearl have expressed their dedication to owning the recruits within the state, but Heron and Ferguson show that both are ready to go beyond their borders to get big-time talent. Alabama isn't just a football state anymore. The tides are changing quickly.

What does it speak to the brand that is Bruce Pearl and his staff to be able to pull Mustapha Heron, a top tier wing out of the northeast, to Auburn?

Corey Evans: Heron, originally committed to Pitt before backing out of the verbal this past winter, is the definition of an alpha-dog. He fits the mold of what Bruce Pearl is all about…toughness and versatility. What does it mean that Pearl not only went out of his area to pull the senior wing out of Connecticut, but that he also beat the majority of the Big East and Kentucky for him? It means a ton, and then some. The SEC has been run by Kentucky and Florida over the past few years. Bruce Pearl made a megaphone loud statement Sunday morning announcing that the Auburn program is back on the national stage as one that will be fighting for and able to land the best of talent, regardless of demographics.

Garrett Tucker: Bruce Pearl has done a fantastic job of recruiting nationally since taking over at Auburn. Back in June, Josh Langford, the top prospect in the state of Alabama, committed to Michigan State. While it was a longshot for the Tigers to land him, Auburn fans aren’t accustomed to losing a five-star talent and replacing him with another five-star guy. This is a statement to the SEC and the rest of the country that Auburn is relevant and ready to be a competitive basketball program.

How surprised were you with the commitment of Heron and why?

Corey Evans: Surprised? That is an understatement. St. John’s was thought to be the clear front runner for Heron with others such as Kentucky, Mississippi State, and Alabama vying for his services, just as well. However, when Heron made a visit to Auburn over the weekend, there was always a chance that he might pop. Still, I was a bit flabbergasted whenever word began to spread that the Connecticut native decided to end his recruitment and give his word to Bruce Pearl and his staff. There weren’t a ton of connections between Heron and the staff/program; it is located in a different world when comparing Auburn, Alabama, and Waterbury, Connecticut, and there isn’t even a shoe brand affiliation between Heron’s New Rens (Adidas) squad, and the Auburn program, that is Under Armour.  However, the staff made quick strides with Heron and shook the recruiting scene up with the giant get.

What was the buzz in the state of Alabama with the Heron’s commitment?

Garrett Tucker: As noted above, I think everyone was shocked at Heron’s commitment. He had previously said he planned to take more visits then make his decision in November. Nevertheless, after the first wave of shock, Auburn basketball now has some buzz going into football season (and that has rarely happened). Bruce Pearl and his staff have Auburn fans optimistic of what there is to come in the next few years on the hardwood. For the first time in a long time, fans are excited about the future of Auburn’s basketball program. With new, state-of-the-art facilities and blue-chip prospects in the mix, big things are happening down on the Plains. And the next few years aren’t looking too bad, either.

What was the buzz in the state about Ferguson's commitment?

Garrett Tucker: Of course, Alabama fans are ecstatic about Ferguson's commitment. Not only is he a talented prospect, but, according to the national rankings, the scorer is regarded as a better player. That's all Alabama fans want to express now. They one-upped Auburn one day after the Tigers reeled in their biggest fish on the recruiting trail in who knows how long. Football season is still in the fore-front, but Ferguson's commitment shows Alabama fans and the rest of the state that he is dedicated to winning right now.

With Anfernee McLemore and Jared Harper on board, how important is it to have those type of commitments mixed in with a guy like Heron in the mold?

Corey Evans: Every team needs their star player during crunch time, but also the role, complementary pieces that can afford the team to have the chance to remain in the game whenever crunch time situations show its face. McLemore is one tough, energized big man while Harper is a shot-making assassin from out top as he can take over a game with the jump shot. Each of the two previous commits stand out with one or two of their assets. With Heron, the Connecticut senior can do a plethora of things. He can make up for others mistakes, brings an alpha-dog mentality to the floor, and can be the guy that takes the ball at end of game situations and makes the drive and kick to an open Harper out top, or the drive and dump for the emphatic dunk to McLemore. Nice get, Bruce!

How are these guys coming in going to complement the class that the staff put together in 2015?

Corey Evans: You know you’re in a pretty good situation whenever you’re when you have a class entails the likes of Danjel Purifoy, Horace Spencer, and Bryce Brown. A lot of programs have struck gold one year, but fail to back it up with another solid class. This leads to inconsistent production on the hardwood and a major fall off. With a well-rounded 2015 class that fits the mold of the past successful teams of Bruce Pearl during his time at Tennessee, and you throw in three quality gets that fit the culture and specific needs that the 2015 squad might display, the complementary pieces that the 2016 class brings in with shot making, rebounding, and playmaking, to the 2015 class that brings versatility, length, and facilitating, should make for some successful years for the War Eagle program and allow for the future classes to just be as good, especially with the bevy of talent within reach.

What does this mean with the SEC as a whole in basketball in comparison with the recent success of the SEC on the football gridiron? Does basketball follow a similar trajectory in being the talk of the national landscape as the go-to conference?

Corey Evans: The SEC has been the talk of the town, better yet, the nation as to what conference is the best in all of America. Why this matters? You got me but it is a great talking point. Basketball has been behind in recent years and while Kentucky and Florida have dominated the SEC, the infusion of talent to the likes of Texas A&M, LSU, and now Alabama and Auburn is showing that the sport of basketball might have a say as to who is the lead dog throughout the nation of the best of conferences in college basketball.

Taking it a step further, by looking ahead to the 2017 and 2018 classes, the amount of talent within the SEC states and those that border it, is off the charts. Florida, Georgia, and Texas are always loaded with ballplayers, but now Louisiana, Alabama, and Mississippi are right there with them in producing some of the most premier of talent that the nation has to find. Coming back to the state of Alabama, one recruitment that really excites me is of Garrison Brooks. The 6’9 center attends Auburn High School, had an uncle star at UAB, and his father is an assistant at Mississippi State. Throw in the recent surge of Alabama on the recruiting trail and Brooks is just another notch on the pole as to who might be able produce and excel in the SEC, but also be pursued quite heavily before coming to a final college decision.