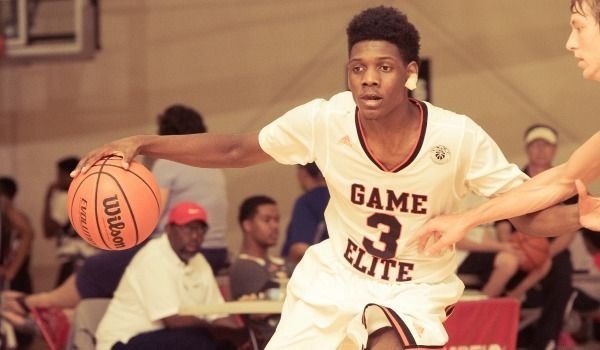 Friday at Best of the South means that teams are vying for spots to go to bracket play and play for a July championship. There were a ton of storylines from a long day of hoops, and here are a few players that caught my eye:

·      Darius Perry, Game Elite, 2017 (Pictured): The HoopSeen staff is more than familiar with Darius Perry. Today, he showed why he is one of the elite guards in the 2017 class. He scored the ball at will in a variety of ways: from three, in transition, and getting to the rim in the half court. He also did a good job of showing he can run the show and find teammates. He also played with the same tenacity and toughness he always has. High major coaches should be on the lookout.

·      Ephraim Tshimanga, Team Impact, 2016: Tshimanga has been a name that has become popular with some Division II and low major coaches in the area. Today, he proved that he can hoop with the best of them. He went off against Wisconsin Playground Elite, scoring the ball from three and taking the ball to the rim. He also rebounded the ball against bigger players and collected a handful of steals.

·      Trey Doomes, Game Elite, 2018: Like Tshimanga, Doomes is an Allatoona product who can do a little bit of everything from the guard position. In the nightcap tonight, he highlighted his scoring ability and athleticism. Doomes used some quick handles to get into the paint, where the lefty connected with both hands. He also got out into transition showing that he can finish well above the rim. Along with that, he tallied a few rebounds, assists, and even a couple blocked shots.

·      Darius Allen, Team MOAM, 2017: Allen has had a great weekend so far. A highly athletic wing with tremendous potential to be a blow-up guy this July, he is showing why coaches should be lined up to watch him play. He continues to make athletic plays while showing that he can put the ball on the floor and extend his range to knock down shots.

·      Danny Butt, Lousiville Magic, 2018: Butt is a young guard with good size and a high level of skill. He is strong with the basketball in his hands and, though flashy, is very efficient with his passing. He was the best passer that I saw today. However, he also showed that when shots come his way, he can knock them down consistently. He is a player I am curious to see more of as his career continues.

·      Balsa Koprivica, Florida Elite, 2019: It’s not everyday that you get the opportunity to see a 7-footer, with a solid skill set, who’s in the eighth grade. That’s exactly what Koprivica is. Though he is still getting used to his size, when he catches on the block or off of an offensive rebound, he is very efficient. He has the makings of being a very solid big man, and with his size, high major coaches should make themselves familiar with him.