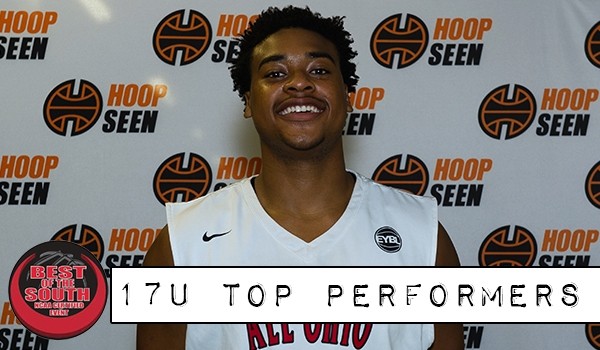 The 2015 Best of the South was loaded with talent and the 17 and under division was a dogfight from start to finish. There were a number of top performers and we’ll go through them this week here on HoopSeen.com. Here’s the third set of reports on our top players from the 17U division.

Charles Bain, PF/SF, Bahama Jaguars, 2016: I liked Bain a lot last year when I saw him play with Bahamas Jaguars. He projects as a Stretch-4 at 6'7" with good ball skills. He can put the ball on the floor and pass off the dribble for his size. As his jump shot develops, I won't be surprised to see him gain high-major interest. He's the type of intriguing prospect that could play both the 3 and 4 positions and yet still defend the 4 at the college level. - KK

Bradley Belt, SG, Atlanta Celtics, 2017: Belt has always been known for his high-volume scoring ability, and, as expected, he torched the nets this weekend at Suwanee Sports Academy. The 6-foot-2 lefty showed off his shooting touch each game with multiple three-pointers and mid-range jumpers. He also played hard on the defensive end of the floor and showed his potential as a lockdown defender at the next level. - GT

Kenny Cooper, SG, WACG, 2016: After seeing Cooper at Atlanta Jam in the spring, we knew that he would be a point guard to look out for at Best of the South. And he was exactly that: a true point guard. Cooper really pushed tempo and was looking to get his teammates involved. He was fantastic as a distributor but he also showed that he can be a solid scoring guard when opportunities come his way. Low and mid majors should have him on their radars. - CW

Quan Jackson, SG, Team Speights Elite, 2016: Jackson was one of the biggest offensive threats of the weekend, showing a very well rounded offensive game. At 6-foot-3 he has the ability to play both guard spots, and can be both a scorer and facilitator. He can also score it by shooting from the perimeter as well as getting to the rim and finishing in the paint. Mid majors should be knocking down his door. - CW

Connor Mannion, PF, Atlanta All-Stars, 2016: There were few guys who raised their stock like Mannion did. He proved that he can play with the big boys and be a solid Division I prospect. At 6-foot-7 he played tough down low, rebounding at a high level. But where he really excelled was shooting from the perimeter. He had one of the best shooting weekends out of anyone in the field, knocking down shots from three and in the midrange. - CW

Jordan Shepherd, CG, PSB Select Elite, 2016: After Sunday’s bracket play, the majority of college coaches in the building knew the name Jordan Shepherd. The 6-foot-3 combo guard capped off a tremendous week with a game winner at the buzzer to defeat the Travelers and advance to the Gold Bracket semifinals. The long, lanky guard has great size in the backcourt and he uses it to his advantage, as he can shoot over smaller defenders. His combination of size and skill will have mid-major coaches court side to see him over the next two weeks. - GT

Nick Ward, C, All Ohio Red, 2016: Simply put: Nick Ward is a monster. It's easy to see why high-majors across the board pursued Ward prior to his commitment to Michigan State. At 6'8", 240, Ward is increasingly agile for his size with good hands that allow him to rebound well out of his area. He bullies opponents around the rim with his strength. Ward was one of, if not the best post player at Best of the South. - KK