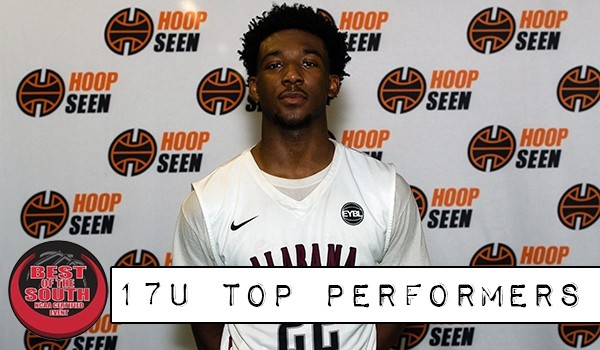 The 2015 Best of the South was loaded with talent and the 17 and under division was a dogfight from start to finish. There were a number of top performers and we’ll go through them this week here on HoopSeen.com. Here’s the second run of our top players from the 17U division.

Darius Allen, SF, Team MOAM, 2016: Talk about a guy with some blow-up potential. Having already had a great performance in our building at Bob Gibbons TOC, Allen was back showcasing new talents as well as the same bounce and athleticism he has in the past. The most impressive part of Allen’s weekend was that he showed he can be a true 2-guard, putting the ball on the floor and getting perimeter jump shots to fall. Combine that with his physical gifts, and you potentially have a very special player. - CW

Trent Frazier, CG, Wellington Wolves, 2017: Coming into April, Frazier was an unknown prospect from the Sunshine state. However, during the first July evaluation period, he was a hot candidate for many coaches to watch. It's safe to say the 6-foot-2 guard is now a known commodity. Frazier torched the nets again this weekend, as he scored at a high rate by getting to the rim and shooting the 3. He has also proved himself as a great passer, too. With mid-majors and some high-major schools taking a peek, it looks like he is ready to enter the national spotlight. - GT

Qyemah Gibson, PF/SF, Bahama Jaguars, 2016: I saw the Bahamas Jaguars 16U group a year ago and one of the players that stood out to me from that roster was Qyemah Gibson. Fast forward to this past weekend and I still think the same thing. Gibson is a really long, athletic guard. There's a perimeter stroke here too, but Gibson excels at getting to the rim in traffic, running in transition, and attacking the glass for put-backs. If Division I schools aren't already involved, well, they should be. - KK

Justin Hopkins, SF, Alabama Challenge, 2016 (pictured above): Hopkins isn't the top prospect on his team nor is he the best player, but he very well may be the most valuable guy on the roster. The 6-foot-4 forward brings consistency each time out with his all-around game. He is strong and physical enough to compete with post players down low, but he has the quickness and athleticism to play on the perimeter too. Hopkins’ warrior-like attitude has his name on the radar of several college programs, and his consistent production will bring more calling at the low and mid-major level. - GT

Darius Perry, CG, Game Elite, 2017: Perry always brings a tenacity and ruthlessness that anyone would love to watch. He was fantastic on both ends of the floor this weekend. As always, he locked in on defense, creating a lot of opportunities for him to showcase some high flying in transition. Another facet where Perry impressed was with the perimeter jump shot, drilling them from three and in the midrange. When he has that jump shot going, he is easily one of the elite guards nationally in the class of 2017. - CW

Ephraim Tshimanga, PG, Team Impact, 2016: Having seen Ephraim Tshimanga at so many of our HoopSeen events this spring, you shouldn't be surprised to see him making the BOTS standout list either. Tshimanga has a moxie about him that sets him apart from so many of his peers as a scoring guard. You can play Tshimanga off the ball, but he's best when the ball is in his hands, allowing him to facilitate. Low-major coaches should be kicking the tires here. - KK

Carson Williams, PF, The Travelers, 2016: High-energy, high-production, high-entertainment. That’s what the 6-foot-7 forward brought to the table at the Best of the South. He didn’t disappoint every time out. Williams is a great athlete and the beneficiary of great passes from his teammates all weekend long. He scored above the rim and ran the floor as well as any big in the tournament. College coaches from as high as the SEC were talking about Williams on coach’s row. He earned the conversation. His story added a significant chapter at the Best of the South. - JY