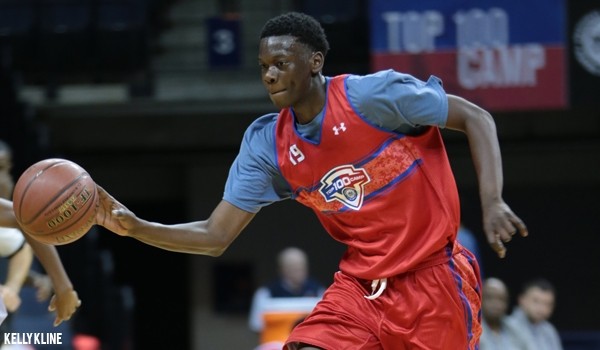 CHARLOTTESVILLE, VA - The wings were good at the NBA Top 100 Camp. Who was the best of the very best at the position? Justin Young and Mike Eddy deliberated on that question for quite a while and compared notes from watching three days of action. Here’s their picks for the top wings.

Miles Bridges, 2016, Huntington Prep (WV): Working with a frame that seasoned college players would like to have, Bridges basically asked the entire field of players to come at him with a challenge. The 6-foot-6 bullied the opposition and played like a pro - physical, confident and from the wing to the rim. He’s a composite top 25 guy nationally in the rising senior class. Though, I’m sure, has been given by the national pundits to make him a top 10 composite player. When we watch the NBA Draft on Thursday night, we’ll see guys with a similar game shake hands with Adam Silver. See Justice Winslow and Stanley Johnson - two power wings.

DeShawn Corprew, 2016, Quality Education (NC): We spent the time in Virginia looking for rankings outliers and no one jumped off the page more than him. Corprew played as well as any wing in the camp. He was consistently among the top scorers at the camp and made sure he involved himself with the offense every time out on the floor. As the No. 208 ranked player in the country (composite), Corprew played much better than the national opinion about his status as a prospect. When you look back and see those who started their summer with a bang, Corprew is at the top of that list.

DJ Harvey, 2017, DeMatha (MD): Quietly, at least from our view, the rising junior was one of the best players at the event and oozed superstar talent from start to finish. He has a smooth approach with effective and positive results. Sometimes when you are so good and so simple, expectation can be a blinder to great. Much like Jayson Tatum in the 2016 class, Harvey quietly goes about his business and delivers every time out and does it better than 95 percent of his peers. There’s not a lot of sexy to his approach - just effective. And that’s perfectly fine by me.

Jarred Vanderbilt, 2017, Victory Prep (TX): The more I watch the Houston wing, the more I’m seeing. Like a diamond being cleaned, the light continues to hit the different facets and a new wonder of his game becomes clearer for me. The part of his game that I drew to appreciate was his passing. Man, he can pass. At 6-foot-7, he’s good inside and out. Athletically, there aren’t a lot of guys like him at any position that can do the things he can do. I’ve got a short list of the most versatile players in America. Vanderbilt is sitting high on that list.

Mark Vital, 2016, Prime Prep (TX): The Texan went hard to the rim every time he touched the ball. He was like a linebacker exploding towards the quarterback the millisecond the ball was snapped. Vital was going in with a purpose and brought some muscle and strength behind the drive. He was bound and determined to try and dunk everything if he made it to the paint. While there was more left to be desired from seeing skill, Vital played to his strengths and just bullied people. If you are a Baylor fan, you’re going to love that. The future Bear did a fine job on the national stage.

DeRiante Jenkins, 2016, West Oaks (FL): He just made plays. Time and time again, he made plays. Jenkins was as good of a slasher there was in the field and was at his best when he was curling from the wing to the iron. The 6-foot-6 former wide receiver knows how to break through man coverage to get open and gets the ball high. When he gets it, he catches and finishes. He plays hard and active on both ends. Jenkins brings a lot of value to a team that likes to work end to end. Jenkins proved he belongs with the head of the class.

Brendan Bailey, 2016, American Fork (UT): My first impression was a good impression. The 6-foot-7 forward, and son of former NBAer Thurl Bailey, was one of the most intriguing players I saw in Virginia. He shot well from the wing but then dug in deep and rebounded in the paint. He was one of the best pick and pop forwards in the event. Is he a big? Is he a wing? Not sure on both. He’s a player. And a darn good one at that, too.