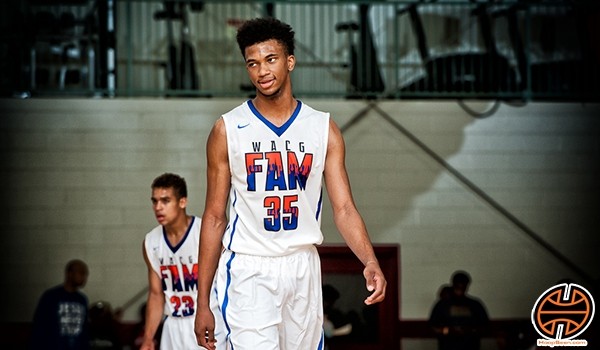 The 2015 Nike Memorial Day Classic was loaded with talent. Our staff spent two full days here at Suwanee Sports Academy and watched as much as we could from the Nike EYBL 16 and under teams. We’ll break down the top performers from the event over the next couple of days. here’s our first set of studs.

Marvin Bagley, PF, We All Can Go, 2018 (pictured above): Wherever Bagley and WACG went, the crowd was sure to follow. And when the lights were on, Bagley delivered. The 6-foot-10 post did everything you’d expect from a guy the pundits call No. 1 overall in the 2018 class. He delivered inside and out. The best part of Bagley’s game is his elite footwork. The Tempe, Arizona big man has a nice tempo to his game - never rushed and never slow. He found the moments to dominate on the blocks and was a constant 20 and 10 guy against the very best that was thrown his way. From a first impression standpoint, Bagley was fantastic. He’s the best player we’ve seen at Suwanee Sports Academy this year on the hardwood. - JY

Silvio de Sousa, PF, E1T1, 2018: After seeing him for the first time at Bob Gibbons TOC, the HoopSeen staff was excited to get another look at De Sousa. He is a very physical presence and it is hard to believe that he is just a rising sophomore. The Montverde Academy forward showed a complete offensive skillset that included a great face up game and mid range jump shot. Combine that offensive skillset with the ability to bully around other forwards and athleticism that allows him to finish well above the rim with great body control, De Sousa could end up a blue chip prospect in 2018’s class. - CW

Blake Hinson, SF, Showtime Ballers, 2019: Why make such a fuss over a rising 9th grader? Because the kid is that good. Size – Check. Athleticism – Check. Skill Set – Check. Basketball IQ – Check. The young man is dripping with talent but what stands out is his feel for the game and making the right play. After watching him play, it came as no surprise that his dad is a former Division I coach. The kid can play and you can expect other High Major programs to follow FSU’s lead in offering the youngster because he is that good. - WN

Davion Mitchell, CG, Georgia Stars, 2017: I’m not sure if there is a more ferocious player on the 16U EYBL circuit. This young man only knows how to play the game one way:  Hard.  Davion is always around the ball making his presence felt on both ends of the court with his play.   The best thing I can say about the young man is that he makes Winning Plays that will translate to the next level. His highlight of the weekend was making 5 3’s on his way to scoring 27 points in a big win over a very talented Southern Stampede team. The talented guard will have High Major college coaches from all over the country descending in droves on the sleepy South Georgia town of Hinesville with scholarship offers. - WN

Collin Sexton, PG, Southern Stampede, 2017: Sexton has been very impressive this spring, raising his stock considerably among guards in the 2017 class. At Nike MDC, he continued his scoring ways, showing that he is not afraid to mix it up among the trees in the middle. He had a variety of finishes in the paint, including getting into the bodies of shot blockers, absorbing contact and finishing. He also showed that he can just finish over bigger defenders as well, throwing down a couple of dunks in traffic. He just has a knack for scoring the ball and could be a riser in the July period. - CW

Connor Vanover, C, Arkansas Wings, 2018: I’m a big fan of uniqueness. If you’ve read anything of mine on this site or on Twitter, I express this often. At 7-foot-2, the freshman certainly fits the mold of being different. Now mix in the element of being a strong face-up shooter that is accurate, effective and consistent. That’s unique. Vanover showed off his three-point acumen at the Nike Memorial Day Classic. Defensively, as you’d expect, he changes shots because of his length at the rim. As he develops strength and confidence, Vanover will be an interesting player to watch develop into a no-brainer elite high-major guy. - JY