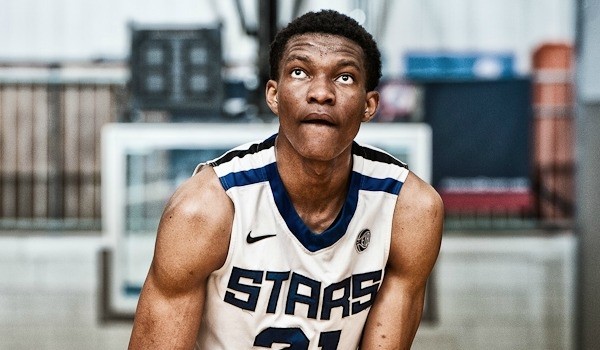 SUWANEE, GA - Two five-star big men, the nation’s top freshman, tons of highly competitive game and packed courts with peaked interest of fans and onlookers. Those were the storylines on a busy Saturday at the Nike Memorial Day Classic. Our Justin Young recaps his day at the loaded event.

Big men battles, good big men battles, are a rarity these days at the travel team level. Especially at the 16 and under level. So, when 7-footers like Ikey Obiagu and Zach Brown get together on the low blocks, you better believe people take notice.

The two five-star prospects (on our books), gave on-lookers everything they wanted in the best game we saw all day.

Brown scored at a better clip than Obiagu in the paint, finishing with 18 points.

Obiagu, the best shot-blocker in American amateur basketball, had a block against Brown that could go down as the most impressive one we’ve seen all year long. Brown, a long 7-footer has an awkward and difficult-to-block skyhook-like shot that he goes to. At its release, the ball is nearly 12 feet in the air. Obiagu blocked one of those.

Mentally picture that for a second.

Yep, that’s impressive. Obiagu lived up to his status as the best shot-blocker in the game. The Georgia Stars big man, by my count, had nine blocks in the match-up to go along with his eight points and eight rebounds.

Chuma Okeke made a steal on a South Beach in-bounds pass, stepped back and knocked down a three-pointer. The Stars went up a bucket. Okeke ran his long 6-foot-7 frame back on defense like nothing happened. Truth be told, that play was the game-changer in a terrific back-and-forth battle. And he acted like he had been there before.

The Atlanta (GA) Westlake forward had a fine game in this match-up and continues to live up to his billing as one of the top 100 players in the class of 2017.

Also playing well for the Stars was Davion Mitchell (2017/Liberty County GA HS) and Danny Lewis (2017/Atlanta Westlake). The two combined for 35 points in the win and continue to make up one of the best backcourts in the South’s 16 and under division.

Marvin Bagley was the best, and most productive, player of the day. The guy most believe to be the No. 1 player in the class of 2018 showed why he is held in such high regard. Bagley beat up the opposition with a terrific inside/outside combination. The 6-foot-10 lefty got better as games went on and was better in the second half of action of the games he played on Saturday.

Christian Popoola of the Utah Basketball Club played as well as any guard at the Nike MDC on Saturday. The 6-foot-2 backcourt stud did just about everything you want for your guard. He challenged WACG in a big way and had his way to the tune of 26 points.

Tyler Polley of E1T1 has one offer right now, according to our latest update. UAB is ahed of the curve. Truth be told, that’s about to change. The 6-foot-7 Floridian is one of the best wing forwards we’ve seen from the class of 2017. How good? I’d make a strong argument for top 40 overall in his class. Keep an eye on him in July. He could explode.

Devontae Shuler of the South Carolina Hornets has always been one of our favorite players around the HoopSeen offices. The 6-foot-2 athletic scorer was one of the most entertaining players in the building on Saturday. He can absolutely fly and keep a scorekeeper working so fast that an extra pencil on the table is necessary.