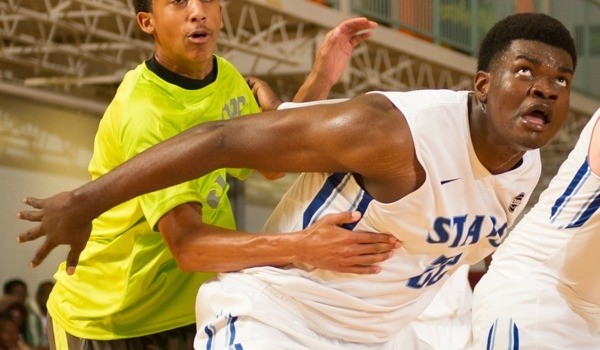 The 17 and under division of the 2015 Bob Gibbons Tournament of Champions was absolutely loaded with talent. We’ll spend the rest of the week looking at the top performers from the tournament. Here’s round 1:

Udoka Azubuike, C, Georgia Stars, 2016 (pictured above): With sheer power and intimidation, no one did more in the paint on the offensive end of the floor than Azubuike. He abused the iron with his 6-foot-10, 250-pound frame time and time again. Defenders just moved out of the way for fear of losing a limb as the big man from Potter’s House (FL) threw down dunk after dunk. I’m not sure if there is a player in high school that can slow him in the paint. He dominated the field all the way to the MVP award of the 17 and under division. - JY

Robert Baker, PF/SF, Game Elite, 2016: There aren’t many more unique prospects in the county than Game Elite’s Robert Baker. The 6-foot-10 forward has tons of upside and it’s easy to see why he received double-digit offers following the live evaluation periods. The skill level he possesses is unheard of for a player his size. He still needs to fill out his body and get tougher, but he is undoubtedly one of the most intriguing prospects in the country. - GT

Jordan Bruner, PF, Upward Stars, 2017: Upward Stars Southeast had a bevy of quality talent, but none impressed me more than Jordan Bruner. His length and athleticism were one thing. You expect that on the grassroots scene. But then he displayed a nice stroke from 15 feet and continually rebounded well. He's a high-major prospect out of the Palmetto State. - KK

Wendell Carter, PF, Georgia Stars, 2017: What's not to like? In terms of size and skill, the state of Georgia probably hasn't seen a player quite like him in some time. At roughly 6'10", Carter moves and plays like a player roughly 6'6" or 6'7" on the offensive end. Carter's skill level is ahead players his size at even the Division I level at this stage. There's a reason he's a Top-10 national prospect in his class. - KK

Keon Clergeot, SG, Florida Elite, 2016: One of the most exciting players of the weekend, Clergeot put on a fun show with his ability to handle the ball. The Florida Elite point guard keeps the ball on a string. Combine that with his elite level quickness, and you have a guard that is extremely difficult to stay in front of. Clergeot was a nightmare for defenses this weekend because of this and also proved that he should be respected shooting the ball too. You will also see him on any Bob Gibbons highlight videos as he put on a show in transition. This guy is an absolute bucket-getter. - CW