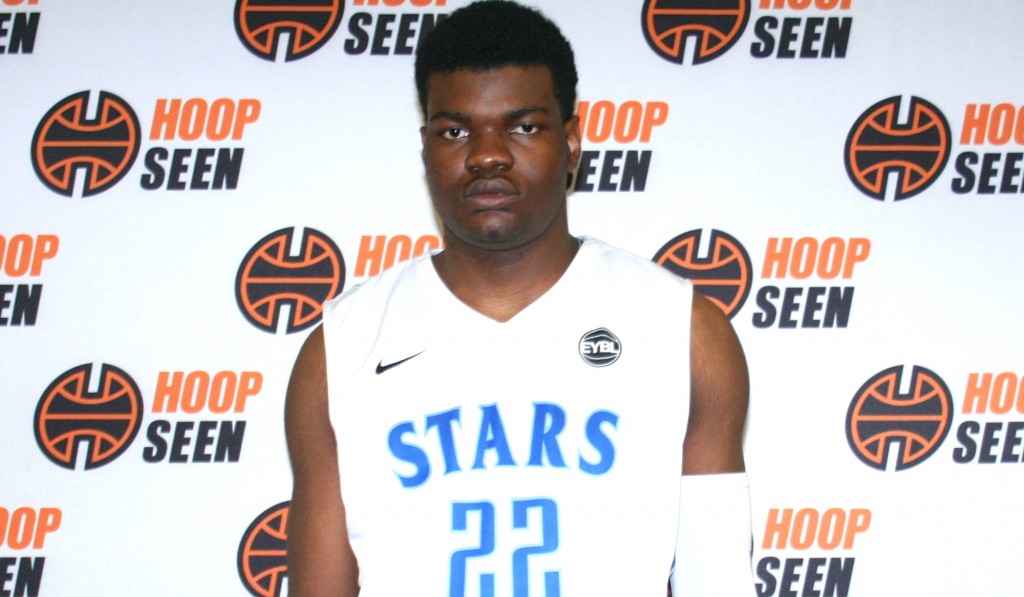 The 17 and under division of the Norman Parker Showcase was fantastic. There was talent all around and our staff of writers break down the best performers we saw from the weekend. Kory Keys, Carter Wilson and Justin Young take a look at the best of the 17U division.

Udoka Azibuke, C, Georgia Stars (pictured above): Sheer power. That’s what Azibuke plays with and he doesn’t discriminate when it comes to using his unique size and strength. He’ll muscle through anyone that lines up against him on the low blocks. Pound for pound, there wasn’t another player in the event that could match what Azibuke brought to the table. He was a man versus the field. - JY

Robert Baker, PF/SF, Game Elite: The singular word to describe Baker is "unique." He's 6'8" with guard skills. He carries his high school team and provided much of the same over the weekend. I definitely see why a few high-majors have already offered and wouldn't be shocked if more offer him after this April live period. There simply aren't many kids nationally with his size, length, and skill set. There are hundreds of long, raw, 6'8" post players. But there aren't many 6'8" wings. If Baker continues to score the ball, he's going to be a player that's ripe to blow up. - KK

Wendell Carter, PF, Georgia Stars EYBL: It's pretty easy to see why Wendell Carter has grabbed so much attention within the last year simply by looking at him. Then you watch him play and you see a kid with skill level and agility that very, very few have at his size and age. His face-up game is already advanced to go along with an elite game offensively and defensively around the rim. The lone thing I want to see out of the young big man is a better motor. If he can sustain his energy level over the course of a game, he's going to be a no-doubt Top-5 national prospect going forward. - KK

Tobias Howard, Jr., PG, Stackhouse Elite: After spending this past season at IMG Academy in Florida, the former North Gwinnett guard returned home and played like he always does at Suwanee Sports Academy - on fire. Howard, an available guard in the 2015 class, shot incredibly well and helped pilot his team to the 17U Blue Bracket championship game. His three-point shooting has been his calling card for years. He was consistently effective in that department at the NPS. - JY

Tyrie Jackson, SG, Georgia Stars South: I went into watching 16U Georgia Stars South not knowing much about the South Georgia prospects, but I came away extremely impressed with Tadric Jackson's little brother, Tyrie. He handled point guard duties as his team came away with a championship. The perimeter stroke is already there, but he's also a plus ball-handler with top flight quickness. College coaches need to have him on their radar going forward. - KK

Chris Lewis, C, Atlanta Xpress: Lewis was the main presence down low for the Atlanta Xpress, and he held his own and then some against some of the best post players in the nation. The Harvard commit showed a variety of moves in the post, finishing with both his right and left hands as well as a soft touch from the high post in the midrange. Lewis also shined in transition as he runs better than most big men and can finish with authority in transition. - CW

Jordan Lyons, SG, Heat Check: Admittedly, the first time I saw Jordan Lyons was at the Elite Preview and, frankly, I couldn't get a good feel for his game. He's built like a tank at 6'0" tall with broad shoulders. The thing that surprises you is his athleticism getting to the rim off the dribble. That's not necessarily a unique skill in today's grassroots scene, but sets Lyons apart is his quick release from the perimeter. The stroke is there and I see no reason why Lyons won't be a low-major-plus prospect. - KK

Ben Robertson, SG, PSB Select: Robertson is a wing that is a jack of all trades and does a little bit of everything on the floor. He opened some eyes right away in PSB Select’s first game when he had a tremendous dunk all over an Atlanta Xpress defender, one of the best highlight plays of the weekend. Robertson also showed the ability to shoot it from deep and put it on the floor, while also having the tenacity and toughness to get dirty on the interior and rebound and bang with bigger forwards and post players. - CW

Brandon Robinson, SG, Georgia Stars EYBL: Having watched this kid play since he was in middle school, you always kind of knew he'd eventually be a player, given he was raised by a former high school coach. What makes him unique now is he's 6'5" with lead/point guard skills. His length and athleticism obviously give him the strong ability to score off the dribble. But what he doesn't get enough credit for is his vision and passing ability. Robinson is playing on an AAU team full of elite bigs that demand the ball, so his shot attempts obviously decrease, but that's not indicative of Robinson's play. He's finding a way to display another element of his game while not having to shoot the ball every other possession. - KK

Kevon Tucker, SF, Atlanta Xpress: Tucker was in a zone all weekend. Arguably the best scorer of the event, Tucker was firing on all cylinders, scoring from deep and showing the ability to get to the rim and finish with contact. His 27 points against the Georgia Stars helped the Atlanta Xpress get a win in the biggest game of the weekend and helped Tucker boost his case as a mid-major or mid-major-plus recruit. - CW

Romello White, PF, Stackhouse Elite: White came into the event as one guy the HoopSeen staff wanted to have close eyes on. The big man showed why right out of the gate, playing with a lot of energy and giving Stackhouse Elite a great presence on the block. White also showed the ability to get out and run in transition and get to the rim and finish. The big men were fantastic all weekend at Norman Parker Showcase, and White was right up there among the elite players. - CW