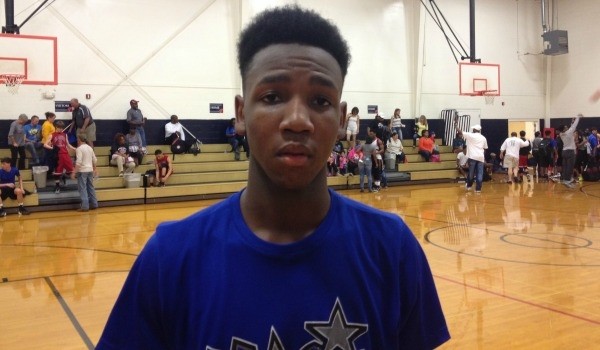 Alabama’s AAU season officially tipped off over the weekend, as some of the best programs in the state met in Montgomery for the AAU State Qualifier event.

With some of the top teams in attendance, some talented players also made their statements.

Here are the standouts from Saturday’s play:

Jason Landman, 2016 PF, Team SAC: Landman stole the show in Team SAC’s matchup against the Mobile Warriors Elite. The 6-foot-7 big man scored 26 points in the win, and he scored in a variety of ways. The junior displayed several post moves and post combinations. His skill-level is very high, as he can handle the basketball and his mobility stretches the floor. Landman can hit multiple 3s and hit mid-range shots. His ability to run the floor also gives him easy buckets. Low-major programs looking for a stretch-4 man, put Jason Landman on your radar.

Devin Whitfield, 2016 SG, Alabama Magic (pictured above): Whitfield and the Magic started out the weekend with a bang in a big win. On a team with some talented players, Whitfield stole the show with his shooting and scoring ability. In the first three minutes of play, the 6-foot-2 guard had two 3s and a finish at the rim with contact. When Whitfield gets hot, he is very tough to contain and stop. The junior finished the game with 17 points in three quarters of play. Samford, Lipscomb, Wofford, Alabama State, Texas Pan-American, and Arkansas are all showing interest in the scorer.

Trendon Watford, 2019 CF, Alabama Challenge 16s: Watford is the youngest player on the Alabama Challenge 16s team, but he may be the long-term prospect the state has to offer. At 6-foot-7, Watford has great length and is extremely versatile. However, his skill-level is the most impressive. The 8th grader is fundamentally sound and his shooting technique is picture-perfect. Watford can score from all three levels, too.

CJ Jones, 2016 SG, Birmingham Storm Elite: Jones will suit up with the Tennessee Tigers on the AAU circuit, but this weekend he played alongside scorer Javien Williams and the Birmingham Storm. Jones took advantage of his weekend with a 19-point performance on Saturday afternoon. The 6-foot-3 guard is wired to score the basketball and he can do it in a lot of ways. Jones is most effective scoring off the dribble and does most of his damage from 15-feet and in, but he can hit shots from behind the arch, too. With his length and athleticism, Jones will get some attention from mid-major and high-major programs. Clemson, TCU, UAB, La Salle, and Arkansas are some schools involved.

Javien Williams, 2016 WF, Birmingham Storm Elite: The best way to describe watching Williams is entertaining. The 6-foot-4 wing man continues to show his scoring ability and athleticism, and he is becoming a highlight reel to watch. The gym was buzzing about his poster dunk from Friday night’s opening game. Williams’ athleticism is ability to score several ways will earn him several looks in the next few weeks.

Bradley Belt, 2017 SG, Alabama Challenge 17s: On a team loaded with some of the most talented 2017 prospects in the state, Belt was able to shine with shooting and scoring ability on Saturday. The 6-foot-2 lefty is a streaky scorer and he made the gym aware of his scoring ability during the afternoon. Belt scored on four consecutive possessions, hitting a couple of 3s and attacking the rim and finishing.

Herb Jones, 2017 PG, Alabama Challenge 16s: There’s a lot of promise that comes with Herb Jones. The 6-foot-3 guard can play both guard positions, and his length and athleticism allow him to guard multiple positions on the floor. Jones didn’t do much scoring, but when he did, he did a nice job of slashing and getting to the rim. Instead of doing a lot of scoring, the sophomore showed his unselfishness with his passing ability. Some offensive skills probably need to be refined in the future, but Jones’ best basketball is ahead of him.

Reginald Todd, 2016 SG, Alabama Legends: Todd had to shake the rust off after missing the high school season because of a transfer rule, but it didn’t take him long. The 6-foot-4 athlete excels in transition with his athleticism and ability to get to the rim. Todd couldn’t get his shot to fall from the outside, but he was able to get to the rim with his quickness and explosiveness.

Austin Wiley, 2017 C, Alabama Challenge: The physical transformation Wiley has made in the past year is going to be a big part of his success this AAU season. The 6-foot-9 big man has added plenty of weight and strength to help him compete in the trenches at a high level. Wiley is a great finisher around the rim, as well as a good three throw shooter. He rebounds outside of his area and is fantastic at blocking shots.

Darian Adams, 2016 SG, Hoop Addicts: Adams had a hard time getting his shot to fall against the Challenge 17s on Saturday, but he was getting to the rim and making shot opportunities for himself. The 6-foot guard did exactly as he did at the Alabama Elite Preview, using his strong body to allow him to get easier shots. The junior is a gamer and will not turn down a challenge. He’s another prospect to keep an eye on.

Josh Hill, 2016 SF, Mobile Warriors Elite: Hill is going to play Division I basketball, it’s just a matter of time as to when he drops on college coaches’ radars. The 6-foot-4 forward can hit shots, but his strength is around the goal. He is physically built and battles around rim, but he is a matchup problem for bigs and wings.

Carleton Williams, 2016 C, Alabama Challenge 17s: Williams is on track to have a nice April on the AAU circuit. After a nice showing at the Alabama Elite Preview a few weeks ago, the 6-foot-9 big man had another successful day on Saturday. He looked better in structure where he knew his role, and that was defending the rim and getting trash baskets around the rim. Expect him to garner tons of mid-major attention in the next few weeks.

Kobe McClain, 2017 PF, Alabama Magic: McClain is really intriguing as a prospect. The 6-foot-7 big man is a po-go stick in the paint, as he blocks shots at a high rate and can defend the rim. His toughness and athleticism helps him be a high-level rebounder. McClain’s offensive game still needs to come along, but he can put the ball on the floor from 15-feet out, as well as score around the goal with his back to the basket.