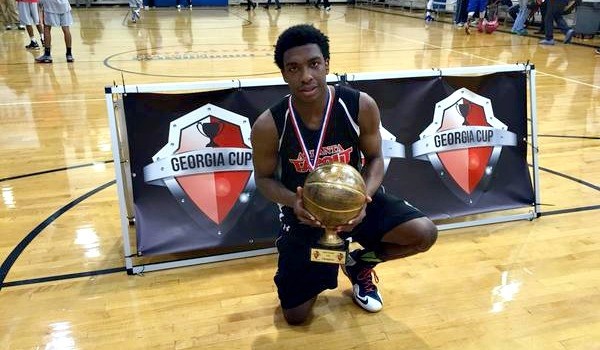 The second Georgia Cup of the circuit is in the books and we look back at the lessons learned from the high school division. Carter Wilson unloads the three biggest takeaways from the weekend.

There are a lot of good ones, and more than a couple of them were showcased this weekend. The 2015 Georgia Stars, who won the 16U division, have a couple of great prospects in Drue Drinnon (East Jackson) & Alex Jones (Alpharetta). Both are extremely quick off the bounce and can get to the rim at will. Along with them come the point guards from the 15U Atlanta Xpress, Kris Gardner (Lee County) & Tony Johnson (Eufaula (AL). They also left an impression this weekend with their play. All of these guys will be names that hoop heads will hear a lot from over the next three years.

Emergence of an unknown

The Georgia Cup is great for prospects trying to play their way onto the HoopSeen radar. The guy who did that this weekend was 17U North Atlanta Orangemen point guard Darrian Brown of Centennial. Brown is a tall guard at 6-foot-3 who is very high energy and can see the floor and distribute with the best of them. He could be a guy to play his way into the 2016 point guard conversation.

Atlanta TapOut won our 17U division, led by unsigned seniors Kareem Brewton and Jordan Thomas, both of Shiloh High School. JuCo’s should be all over these guys. Brewton was a grown man all weekend, punishing smaller defenders and playing a very physical brand of basketball. Thomas was the best shooter we had in the gym all weekend, ending his tournament with a barrage of threes on Sunday, including seven triples in the championship game.