Banks starts spring with a bang 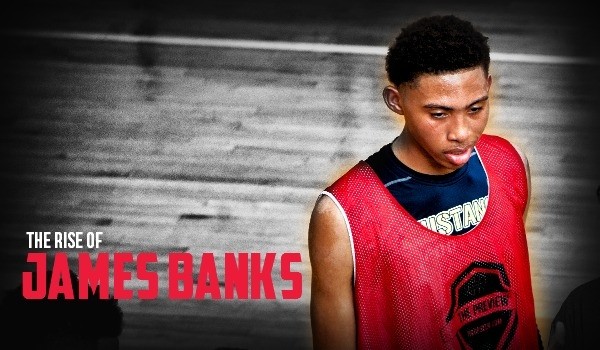 Banks starts spring with a bang

What a difference a year makes. Just ask James Banks. The 6-foot-10 center from Mount Vernon (GA) has quickly emerged as one of the hottest prospects in the Peach State.

Twelve months ago, Banks celebrated with his St. Francis teammates in Macon after winning a state championship in the Class A Private division. But shortly thereafter, he left the North Fulton private school for Mount Vernon. He played well for the Southern Stampede, at times, on the travel circuit and never moved past the "he's going to be good one day" category on recruiting reports.

However, that one day has come. Banks is good. In fact, he may be the most intriguing big man not just in Georgia but in the Southeast. He proved that much at the Elite Preview. The camp was loaded with quality size and talented post players. Banks was one of the very best. According to Evan Daniels of Scout.com, Banks was the breakout player from the Elite Preview.

Banks has already racked up a number of scholarship offers. He told HoopSeen.com at the Elite Preview that Clemson, Cornell, Harvard, George Mason (the old staff) Georgia, Georgia Southern, Mississippi State (the old staff), Nebraska, Tulsa, USC, Tennessee and Vanderbilt have all offered a scholarship.

Banks will play for the Atlanta Celtics on the travel circuit.

Don't be surprised to see head coaches, even elite head coaches, sitting courtside on opening night of the live recruiting period to see the fast-rising big man. We saw it coming two weeks ago at the Elite Preview.