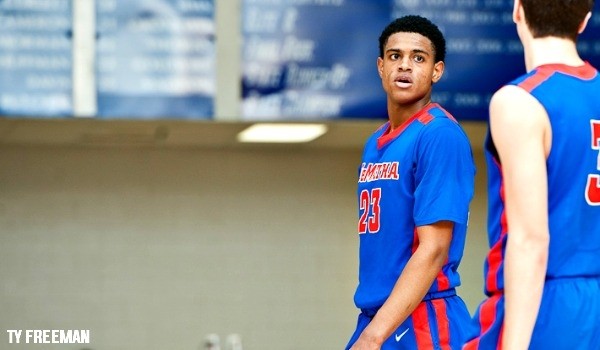 DJ Harvey is one of America's top basketball prospects in the class of 2017. That's not a big secret. The 6-foot-5 wing from Hyattsville (MD) DeMatha has been a name hoop heads are familiar with for quite some time.

Recently, the Alabama returned to his native South with the Stags for the Hilton Invitational and the sophomore put on a second half show against a very good Pebblebrook (GA) team. Harvey, the No. 12 overall prospect in the 247 Sports Composite Rankings for the class of 2017, said it felt great to be back a familiar setting.

"It was good to see a lot of people I haven't seen in a while. (The South) is my first home. It's a great feeling," he said. "It's going good at DeMatha. I've got friends, family, teammates that have all been helping me. We have a good sophomore class."

Harvey looks back to his experience with USA Basketball over the summer as a major jumping point with his game.

"It was pretty good to be recognized going out there and it was good to see where I stacked up with my fellow classmates. It was a great experience and it pushed me," Harvey said. "I felt like I got a lot better being at a camp like that."

Because he's just a sophomore, Harvey said he's not in a rush to jump into the recruiting race. He'll suit up for Team Takeover and play on the Nike EYBL circuit this spring and summer.