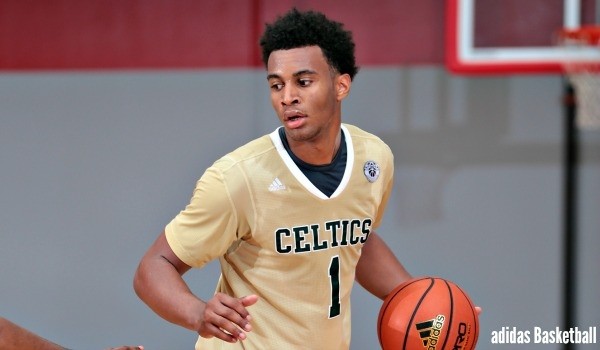 The post-Christmas high school tournaments tipped off this past week with a bang.  One of the top tournaments in the south called Nashville home as Christ Presbyterian Academy hosted teams from all over the country in the Next Level Tournament.

College coaches were also out in full force to see the talent as college coaches from all levels made the trip to the Music City to check out the talent assembled.  Coaches and fans were treated to good basketball throughout the tournament and saw Ballard High School (KY) pull an upset in the Championship game to steal the title from host CPA.

Jalen Perry, CG, Ballard (KY), 2015 – The strong, athletic combo saved his best for last blowing up for 41pts in Ballard’s 99-76 win over CPA in the Championship game.   The young man made 5 straight 3’s in the 3rd quarter to leave no doubt which team was taking home the Championship Trophy.   OVC, A-Sun, So-Con, and Big South schools are all starting to show heavy interest in the fiery competitor from Louisville.

Braxton Blackwell, SF, CPA (TN), 2016 – Blackwell was the biggest name of the Tournament and he did not disappoint averaging 26 points and 8 rebounds over the 3 games.   The high-major wing pulled in an offer from Louisville last week and had Head Coaches from Vanderbilt and North Carolina in to see him during the tournament along with assistants from Ohio State and Georgia.

Micah Potter, PF, Mentor (OH), 2016 – The young big fella showed that he has a knack for scoring and rebounding the ball in the paint.   He already has multiple mid-major offers and has high-major programs evaluating his play.   You can expect him to be a hot name in the spring and on the AAU circuit.

Maxwell Starwood, PF,  University Laboratory School (LA), 2015 – The Tulane commitment was a productive force in the paint and on the glass throughout the tournament.   He has a unique blend of size, athleticism, and tenacity that will help him be a productive big man in college.

Tyger Campbell, PG, CPA (TN), 2019 – The young eighth grader already boasts an offer from Mississippi State and the talent is evident.   The young point guard has the speed, quickness, and handles to turn college coach’s heads.   The future is bright for this young man from Nashville.

Anthony Eaves, CG, Ballard (KY), 2015 –  The combo from Kentucky was a steady hand at the Point for Ballard but was at his best scoring the ball.   OVC, A-Sun, So Con, and Big South schools have all inquired and as he continues to play well you can expect that interest to grow.

Corey Douglas , F, Ballard (KY), 2015 – The talented forward showcased his athleticism and versatility during the tournament on the offensive end finishing plays above the rim, defensively creating havoc guarding multiple positions, and on the glass rebounding above the rim.

Rayshaun Hammonds, PF, Norcross (GA), 2017 – The long and athletic forward is already a well-known name in the Peach State but he’s starting to make a name for himself outside the state.   He showed off his ability to block shots, rebound, and make shots all over the court.

Tim Cameron, SG, Norcross (GA), 2015  – The Georgia guard was a hot name for mid-major and low-major coaches at the Next Level Tournament.   There are a lot of coaches tracking his play and you can expect that trend to continue.

Ricky Madison, SF, Norcross, (GA), 2015 – The High Point commit was a steadying hand for a young but talented Norcross team.   He finished plays, rebounded his position, and helped Norcross to a 2-1 record at the Next Level Tournament with their only loss coming to the eventual champions of Ballard.

Mike Fofana, F, Memphis (TN) Mitchell, 2016 – The young forward came out firing and showed why he’s a hot name for Mid-Major coaches.   He’s got the length and athleticism to make pressing or defensive minded programs take notice.   Expect his recruitment to continue to grow as more coaches see him.

Skylar Mays, PG, University Laboratory School (LA), 2016 – The young PG has a unique blend of size and handles to go along with a knack for creating shots for himself and his teammates.   High-major programs already have him on their radars so you can expect him to be a hot name during the spring evaluation period.