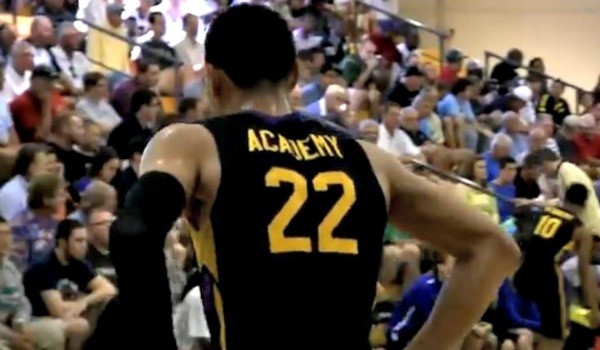 FORT MYERS, FL -- It was all about the stars on Saturday at the City of Palms. And the stars wrote a new chapter in the storied history of the COP. Ben Simmons had a performance that we'll be talking about for a long, long time.

With events like the City of Palms, the stage is there for the taking. There are national media members from every corner of the country. Eyes all over the world want to know what's happening. Future NBA stars play here. The who's who of college basketball show up.

For those considered to be the very best, playing at the very top can cement the storyline in the storied history for, well, forever. So, when a player like Ben Simmons steps on the court with his No. 1 Montverde Academy team all eyes are on him. When he's and his teammates are paired up with a team like St. Francis, an Atlanta group with some of the nation's top players, the pressure is heightened even more.

In a game that went back and forth all night long, Simmons was the guy that answered the call. The left-handed 6-foot-8 forward showed why many believe he's the best amateur player in the country. Simmons was, simply put, amazing.

The future LSU Tiger finished with 37 points on 13 of 24 shooting. He also hit 11 of 13 free throws. Moreover, Simmons had 18 rebounds, nine coming on the offensive end of the floor. His performance was one of the best in the history of the tournament.

Montverde won. But it wasn't easy. It was certainly fun to watch.

GILES MAKES HIS CASE FOR NO. 1

With energy still bumping around the Bishop Verot gym, the 10 p.m. tip-off didn't deter the excitement level for the match-up between Wesleyan Christian (NC) and Mater Dei (CA). In fact, this match-up had just as many storylines of note than the game before between Montverde and St. Francis.

There was Harry Giles, who on the night before played like the No. 1 player in the class of 2016. There was Mater Dei and a 49-game winning streak. There was Kwe Parker of Wesleyan Christian, who is as exciting of an athlete there is - amateur or professional - in the United States. There was Rex Pflueger, one of the best scoring guards in America.

Fans looking for a reason to pour a cup of coffee and watch the last game of an exciting night had plenty of reason to stick around.

The ones who sat in the bleachers until the midnight hour were treated to a fine contest.

As good as Simmons was in the game before, Giles made some plays that were just mind-blowing. To be that big, that skilled, that fast and that quick was a sight to see. Giles played the part of NBA lottery pick very well. Keep in mind, our media policy is to stay away from such statements. However, any reporting of anything outside of such a description would be insulting to the reader.

He finished with a loud 29 points and 15 rebounds in the well-earned and Mater Dei streak-snapping. Giles was simply amazing. He made his case in front of the national pundits for the top spot in the loaded and top-heavy class of 2016.

ANOTHER NIGHT, ANOTHER STRONG BROWN PERFORMANCE

For attendees of the City of Palms over the last two years, they've come to expect terrific performances from Jaylen Brown. On Saturday night, Brown didn't disappoint.

Paired against Paul VI, Brown and his Wheeler teammates were looking for a little redemption from last season. The two met up and the Virginia team put away Marietta team pretty easily. This year was a different story.

It started on defense for Wheeler.

Brown ran down the floor on a Paul VI break, grabbed the ball from stud junior VJ King and sprinted back down the floor for an assist that gave Wheeler a three-point lead that held on for the eventual victory.

The play may read as simple but it required intense effort, quick-thinking and determination. King would have likely scored in the open floor and given Paul VI a much needed shot in the arm. Brown stifled the attempt. This play was the example of what kind of night Brown was going to have.

As good as he is on offense, Brown sometimes gets overlooked on the defensive end. He blocked a couple of big shots and challenged Paul VI's big wings. Brown finished with 19 points in the victory.

The trickledown effect of a player like Brown is helping a guy like junior Cameron Jordan. The 6-foot-4 wing is relishing in his role as a quality sixth man for this Wheeler program. Jordan was terrific in the second half, scoring nine points, grabbing seven rebounds and blocking a couple of shots. While known in Georgia and here on HoopSeen.com, Jordan used the big stage here in Florida to play his way into the national conversation.

DON'T FORGET ABOUT US

As the best of the very best shined on Saturday, there were a number of others that shined on the grandest of stages, too.

St. Francis guards Kobi Simmons had his best of the 2014-2015 high school season in his team's nail-biting loss to Montverde. The five-star guard was good at a lot of things in this match but great at two things - defending well above the rim for blocked shots and, in return, scoring well above the rim and the out-stretched arms of the 7-footers Doral Moore (Wake Forest) and Jean Marc Christ Koumadje (Florida State). He finished with 25 points, five assists and four rebounds.

His running mate - Malik Beasley - was equally terrific in the victory. The future Florida State guard put in 25 points and corralled seven boards. Beasley's jump shot was on point in this game. We think he's a McDonald's All-American level player and performed at such a level on Saturday night.

Future Notre Dame guard Rex Pflueger was outstanding in defeat. The 6-foot-4 guard emptied the tank and finished with a very respectable 26 points, five rebounds and four assists. He's as good of a shooting guard we've seen this year in the class of 2015.

Future Florida big man Kevarrius Hayes was paired up against stud sophomore prospect Zach Brown of Miami Beach (FL) high school. It was one of the better big man match-ups in the event. Hayes didn't disappoint. He did a lot of everything on both sides of the ball in his match-up against the massive 7-foot-1 five-star center. The future Gator finished with 25 points, 11 rebounds, three blocks, three steals and made a number of athletic plays.

THE LIGHTS WENT OUT IN SW FLORIDA

No, really. They did. Florida Air Academy and Webster Groves (MO) locked horns in an early game and things were off to fairly normal start. Then Darius Allen, not your normal athlete, bounced off the floor and threw down a thundering dunk on the south end of the Bishop Verot floor. The freakish leaper must have shook an electrical wire or circuit, causing the lights to go out for 45 minutes.

Webster Groves won 65-54 thanks in large part to 21 points and 10 rebounds from Missouri bound wide receiver Cameron Hilton. Allen, one of the breakout prospects here at the City of Palms, finished with 17 points and a blacked out gym.

Louisville locked up local product Raymond Spalding after the summer because the Cardinals saw what everyone has seen this year - what the long 6-foot-10 big man can become down the road. There were flashes of good things from him in his team's win over Oak Ridge. Spalding finished with 12 points (on 4 of 15 shooting, however) and grabbed 10 rebounds. He blocked three shots and impacted the direction of several others. Spalding is very much a prospect than a player at this stage but that's the appeal.

Antonio Blakeney was eight of 28 from the floor, including four of 13 from three. He tallied 25 points in his team's loss to Trinity. The part of his game that may get overlooked - terrific rebounder. Blakeney grabbed 11 boards.

Wesleyan Christian (NC) will play Wheeler (GA) and Trinity (KY) will play Montverde (FL) on Monday in the semifinals.

This concludes our game coverage from the City of Palms. We will have more analysis and reports from the loaded event on Monday and Tuesday.