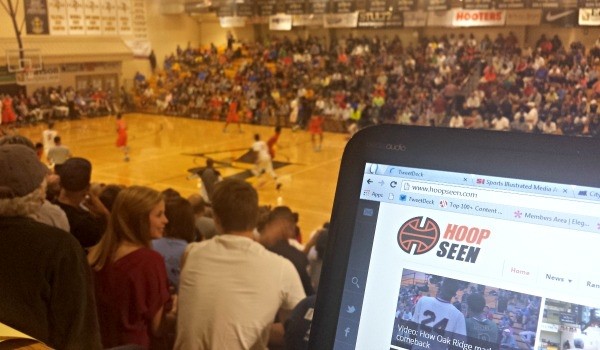 FORT MYERS, FL -- A close call for the nation's top team, a viral dunk, a viral team and five-stars play like five-stars. The action at the City of Palms was full of excitement on Friday.

Any time Montverde Academy steps on the court, the Florida powerhouse has a target the size of the Epcot Center on it's back. Every team, no matter the state, stage or skill will dig deep and try to dethrone the kings of high school basketball.

Wayne (OH) was the opponent on Friday at the City of Palms and had the Eagles against the ropes deep into the game and never let up with the kidney shots and relentless jabs. Suffice it to say, Wayne didn't go away easily.

Montverde held off the late run by relying on the player that gives every team in the country problems - Ben Simmons. The Aussie was efficient in the win, finishing with 24 points, 10 rebounds, five steals and four assists. The future LSU forward made some terrific passes that led to insurance buckets in the fourth quarter.

Wayne's D'Mitrik Trice scored 17 points in the win and always seemed to make a play when his team needed one. Whether it was forcing a turnover, hitting a shot or forcing a Montverde player to make a play they didn't intend on making, Trice found ways to make a difference. Trice is a nice unsigned option at the point guard spot.

Future Dayton forward Xeyrius Williams had a big second half against the monster frontline of Montverde. Williams faced up, shot it well and connected for a trio of triples. Williams finished with 12 points.

Wesleyan Christian won the opening tip against Whitney Young when point guard Brandon Childress, a Wake Forest commit, took the ball and threw it high in the air to Kwe Parker. Boom time.

And that's how it went time and time again for the North Carolina program. The rims were bent over and over. The aerial display of athleticism looked more like Cirque du Soleil than round ball and there wasn't a fan inside Bishop Verot's gym that cared otherwise.

Parker put on an absolute show for the packed house and didn't disappoint. Every time he touched the ball, fans came out of their seats in anticipation of what was next. Parker took care of the people, handing out gifts like a the rosy-cheeked fat man that lives at the top of the globe.

Parker finished with 20 points on eight of 11 shooting. And by shooting we mean dunks.

His running mate Harry Giles was impressive, too. And impressive may be an understatement. The 6-foot-10 versatile forward may have been the best overall performer on Friday at the City of Palms. He did just about everything in his team's win.

As we look at the class of 2016 nationally, Giles has our vote for the top spot in the loaded group. He's as tough of a player to prepare for as there is in the nation regardless of class.

Derrick Jones darn near made the internet break when he drove from the left wing, rose up, cocked back his shot and threw one down, literally, on sophomore stud Cody Riley.

You can see the play here. Watch it three or four times. Then share it with everyone you know. Crazy play. Unfortunately for Jones, his team lost to Sierra Canyon.

Cody Riley was terrific once again for Sierra Canyon (CA). The strong-bodied sophomore muscled his way through the Archbishop Carroll (PA) defense to the tune of 22 points and nine rebounds. The 6-foot-8 left-handed sophomore is one of the elite players in the class of 2017 nationally and didn't do anything to steer that opinion elsewhere so far with his play in Fort Myers.

WHAT CAN BROWN FOR YOU?

Like Parker and Wesleyan, Wheeler High School opened the game against Bentonville (AR) with an oop. To no one's surprise, it was Jaylen Brown that scored the first bucket of the game on the dunk. The Wildcats never looked back.

Brown was his typical self, scoring with aggressive end-to-end drives that defenders wanted zero part of. He's a man amongst teenagers and didn't shrink from his aggressive style of play. Our top pick for the nation's best player in the class of 2015 finished with 24 points (10-16 FG), eight rebounds, four steals, three blocks and three assists.

Brown was fantastic as he usually is. But the storyline here goes deeper than what Brown did. Bentonville stud Malik Monk, a consensus five-star guy finished with 13 points on five of 15 shooting from the floor. He was shut down by impressive sophomore Darius Perry.

Perry has been very impressive this high school season and continues to establish himself as one of the better guards in the South in the class of 2017.

GATES IS BACK AT IT

Two weeks ago, St. Francis (GA) forward Kaiser Gates collapsed in a game against Miller Grove, leaving a gym silent and stunned. It was a scary moment and cautionary tests and retests were ran to make sure the Xavier bound senior was fit to compete . He checked out on all accounts.

On Friday, Gates returned to the court with a full bill of health.

He looked as good as he ever has, showing off all of the attributes that he's capable of maximizing. Gates scored 16 points, grabbed nine rebounds, handed out six assists and collected two steals. It was the full box of tricks.