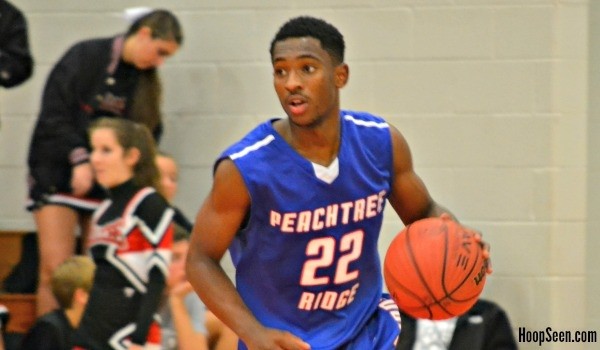 SUWANEE, GA -- The Jared Cook Tip-Off For The Cure rolls on at North Gwinnett High School and the action on Monday was historic, exciting and simplistic.

Two things happened on Monday night at the Jared Cook Classic that few people have ever seen - an incredible display of three-point shooting by Peachtree Ridge and a 52-game Greater Atlanta Christian win streak snapped.

Peachtree Ridge shot a mind-blowing 15 of 20 from three (75 percent) en route to an 80-66 win over GACS. The victory ended the longest active winning streak in the Peach State. Both feats are notable on so many levels.

Peachtree Ridge head coach Keith Arrington has coached a long time in the South and after the game the always quotable Deep South native struggled to find the words on what he witnessed from his team.

"I've been coaching for over 30 years and I've never seen that," Arrington said. "Fifteen three-pointers in one half? C'mon, man. That's crazy."

Indeed it was. The three-point barrage came from all angles. Aaron Augustin hit three. Jay Estime pumped in three. Milz Tatum and Connor Heyward hit each hit a pair. The triples came in triples. The byproduct of good passing and spacing allowed the Lions to find open looks, much to the dismay of GACS coaches.

The Spartans, winners of two straight Class AA state championships, made a strong second half comeback by letting it fly from three, too. GACS outscored Peachtree Ridge in the final 16 minutes of the game but the damage was already done.

Augustin finished with 24 points, seven assists, five rebounds and steal. The junior point guard was terrific in the victory. He was the overall MVP from our standpoint on Monday at the Jared Cook Classic. He didn't do it alone, though.

Heyward scored a dozen while Estime and Tatum each scored 11.

GACS was paced by Lee University signee Cam Boyd, who hit five three-pointers en route to a team high 18 points. Gardner-Webb signee Eric Jamison, who had 16 in the defeat. Brian Coffey and Garrett Covington each scored 10.

Peachtree Ridge will play Lee County at 3:45 p.m. on Tuesday to open the action at the JCC. GACS will follow with a game against Allatoona.

BUFORD GROWING UP IN CLOSE GAMES

Buford is trying to figure out who they are as a basketball team. On Monday evening at the Jared Cook Classic, they are a fortunate group. With less than three seconds left to play, sophomore forward Kyrin Galloway grabbed his team's third offensive rebound in less than a second, lightly threw it through the iron and helped Buford claim an 80-79 win.

Galloway helped save Tre Hansbrough's missed free throws in the closing seconds to steal the victory away. Ironically, Alpharetta was able to climb out of an 18-point halftime deficit by crashing the offensive glass.

Buford head coach Allen Whitehart could only shrug his shoulders at that factoid after the game.

"I told my coaches that the thing we got killed with all game is how we won the game," Whitehart said.

Hansbrough was terrific for three quarters, giving the Wolves a big cushion going into the second 16 minutes of the game. He finished with 26 points, five assists, and four rebounds. It was his second good game in a row at the Jared Cook Classic. Whitehart knows his senior will have to do a lot of that this season if Buford wants to be competitive in AAA.

"He's carrying our load," Whitehart said, "but we have to get him conditioned to being our leader into the fourth quarter."

Taylor Mills added 16 points in the win and made big shots for Buford when Hansbrough was struggling to find his way.

Alpharetta climbed back into it because of huge defensive plays from senior guard Afam Maduka and scrappy buckets from freshman Alex Jones. Maduka finished with 17 points while Jones pumped in 11. Senior forward Devontae Cacok put in 11 points, too.

A year ago, Kam Calhoun was an important glue guy on one of metro Atlanta's top high school basketball programs. Now as a senior, the 6-foot-3 wing is the do-it-all leader of the Bulldogs.

Another night, another versatile showing from Calhoun as he scored 17 points and handed out seven assists in a 71-33 win over Lee County.

Calhoun continues to show off the full arsenal of weapons. On Saturday, he was a rebounding machine and a shot-blocker extraordinaire. Calhoun said he's looking to provide a spark wherever he's needed the most.

Calhoun led the way with 17 points while Adam James pumped in 13 points. North Gwinnett will play host to Whitefield Academy on Tuesday night.