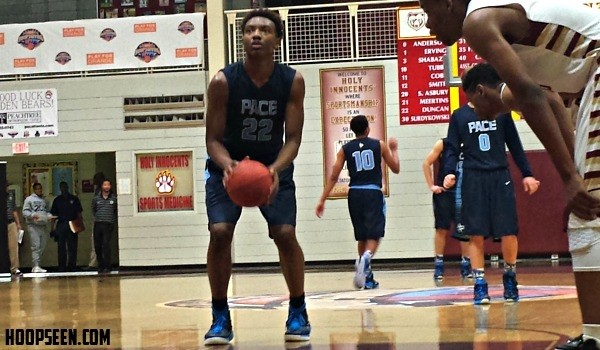 ATLANTA, GA -- The Holiday Hoopsgiving opened up in fine fashion on Friday at Holy Innocents' School as some of the best players in the South lived up to their billing.

In a game that was riddled with fouls, physical play and back-and-forth action, Atlanta (GA) Pace Academy big man Wendell Carter stood in the paint and shed the opposition to reel in 26 rebounds and helped his team beat Huntsville (AL) Columbia 69-55.

Georgia is a state that has long been known for having game-changing post players. This year, however, the state is all about the guards. Tone-setting post players are few and far between these days so when Carter, a long 6-foot-10 paint presence, comes into the game he's instantly the main focal point.

For some young players, that kind of spotlight and expectation may be difficult to handle. For Carter, he passed his first test on a big stage with his new Pace team. Columbia sent bodies - big, strong and athletic bodies - at him all game. Carter won nearly every battle. His work on the glass could go down as one of the best rebounding games not only this season but one of the best we've seen since launching HoopSeen.com.

Carter scored 23 points and did a fine job at the foul line, converting 13 of 20 from the charity stripe. Already considered a top 25 level player in his class, Carter proved himself as Georgia's top overall big man in the state.

LANGFORD LAYS IT ALL OUT

Josh Langford and his Huntsville (AL) Madison Academy team lost to Douglas County on Friday night 76-73. That's the bad news for the 6-foot-4 five-star prospect and his teammates.

Other than that, and individually speaking, Langford was just tremendous. The junior impacted the game in every category. He was the most dominant player on both ends of the floor, the best passer, rebounder, scorer and shooter.

Douglas County, playing nearly the entire game without star junior Brandon Robinson because of injury, earned their victory over Langford and Madison Academy. It was a total team effort.

While Robinson isn't a dominate-the-ball kind of talent, he's certainly an impactful one. The 6-foot-5 junior glues all of the talent together with his passing and basketball smarts. Without him, it was going be interesting to see how the team did against a quality opponent in Madison Academy and elite player like Langford.

For Douglas County, senior guards KJa Johnson (Florida A&M signee) and Correy Tillery and junior guard Kalen Clifton combined for 48 points in the win. Tillery pumped in four threes while Johnson scored at the rim and Clifton converted in the midrange.

We brought it up in our preview of the Holiday Hoopsgiving and it bears repeating: Jenkins will be a team to be reckoned with. The Savannah crew opened things up on Friday with a hard-fought win to open their season. North Cobb Christian made it a game but the Warriors pulled it out 65-55.

When the Power Poll comes out on Monday, the Warriors will be quite high, cementing home the point Benlevi was making.